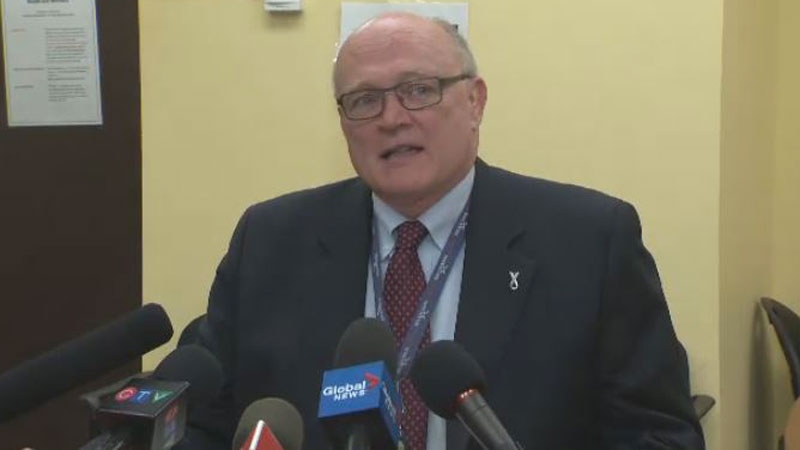 Dr. Robert Strang says the 49 deaths so far this year from opioids -- including seven from the highly addictive painkiller fentanyl -- show "urgent" action is needed to avert a crisis.

HALIFAX -- Nova Scotia's public health officer has launched a multi-front battle against the eastward spread of the highly toxic painkiller fentanyl, which can kill with dosages the size of a grain of salt.

Robert Strang held meetings Friday with doctors, pharmacists and government officials to establish seven committees intended to avert the epidemic of deaths that has plagued western Canada as illicit versions of the drug have spread through the streets.

"The real risk is that people who are thinking they're smoking a joint could be taking a fatal dose of fentanyl or another opioid with that," said Strang in a news conference after the gathering in Halifax.

When cases of near-death overdoses known as "rescues" are included, the per capita figures in the province are starting to approach those seen in Ontario, which in turn is starting to catch up to the western provinces, he said.

British Columbia declared a public health emergency in April of this year due to a drastic increase in overdoses and overdose deaths, from roughly 200 deaths per year in 2007 to 2010, to 484 last year and 308 for the first six months of this year, according to a background release from the province.

Dr. David Milne, an anesthetist and past president of Doctors Nova Scotia, said after the meeting that Nova Scotia is fertile ground for further deaths from fentanyl, as years of overprescribing of painkillers has contributed to a growing pool of addicts.

As elsewhere in Canada, the province's supplies of OxyContin have been less accessible to abuse since 2012 due to reformulations, opening avenues for fentanyl and other opioids.

"The reason that people are concerned now is we recognize there is a background rate of drug use in the community," said Milne.

While Strang said it's the responsibility of police and the Canada Border Services Agency to try and block the flow of mail-ordered drugs -- usually from poorly monitored Chinese factories -- provinces have to be readying for the health fallout.

"We have the opportunity to develop a response plan to be as prepared as we can be," said Strang.

The working committees have been set up to study issues ranging from increasing the availability of naloxone kits -- a medication that reverses the effects of overdoses -- to securing funding for non-profit addiction centres that provide education on the lethal dangers of opioids.

Strang says that action plans will be available in late January or early February.

However, the opposition NDP has pointed out that the government and the health authorities need to speed up measures like reduction in waiting lists for access to addictions services.

They've also issued warnings about the future of harm reduction clinics, which provide everything from education to needles to the naloxone kits, especially in Cape Breton, where a single center that services the island is awaiting word on federal program funding.

Christine Porter, executive director of the Ally Centre, said in an interview that she's concerned about the availability of funding from the Public Health Agency of Canada.

Strang said the Ally Centre as well as the centres in Halifax and Truro provide a vital system of distributing naloxone, clean needles, education and treatment, and the province is looking at how to keep the harm reduction centres adequately funded.

"It's identified as an urgent piece of the work," he said.

"The harm reduction working group is actively working to look at what's necessary for the 2017-18 budget to ensure we have appropriate access to harm reduction services. We're also in active conversation with the federal government about opportunities to sustain some of the funding."

Working groups announced Friday will also look at the treatment of addicts and the prescribing habits of physicians, while police and justice will work on plans to try and keep the fentanyl off the streets.

Robert Purcell, the executive director of public safety in the Department of Justice, will co-chair the opioid strategy with Strang, who says he will attend a national symposium on opioids on Nov. 19.