HALIFAX -- The search for a man accused of assaulting a woman and stabbing a police officer and a police dog in Bridgewater, N.S., continued all day Wednesday.

RCMP officers were stopping eastbound vehicles on Highway 103 just before Exit 6, near Hubbards, N.S., Wednesday morning as they continued their search for 31-year-old Tobias Charles Doucette.

A checkpoint was also established at the Canso Causeway earlier Wednesday, but it is no longer in place.

Doucette, of Bridgewater, N.S., is facing charges of assault and attempted murder. A warrant has been issued for his arrest.

“The RCMP want Doucette to know our goal is to bring this matter to a peaceful resolution,” said the RCMP in a statement on Wednesday. “Police appreciate the cooperation and support of individuals who have called in with tips and information.”

The RCMP has taken over the search because Doucette’s last known sighting was in their jurisdiction in Lunenburg County.

Police say the search is ongoing and they are utilizing a number of resources in their investigation.

"We are being supported by a number of federal and provincial agencies, that includes air support, it includes people on the ground, it includes different resources that you might not see," said Nova Scotia RCMP spokesperson Cpl. Jennifer Clarke. "We are actually overwhelmed, in a very good way, with the number of resources that we have that are helping us with this operation."

Some residents in the Conquerall Mills Road area were evacuated from their homes as a precaution Tuesday evening. Police say they will be in touch with each household when it is safe for those residents to return home. 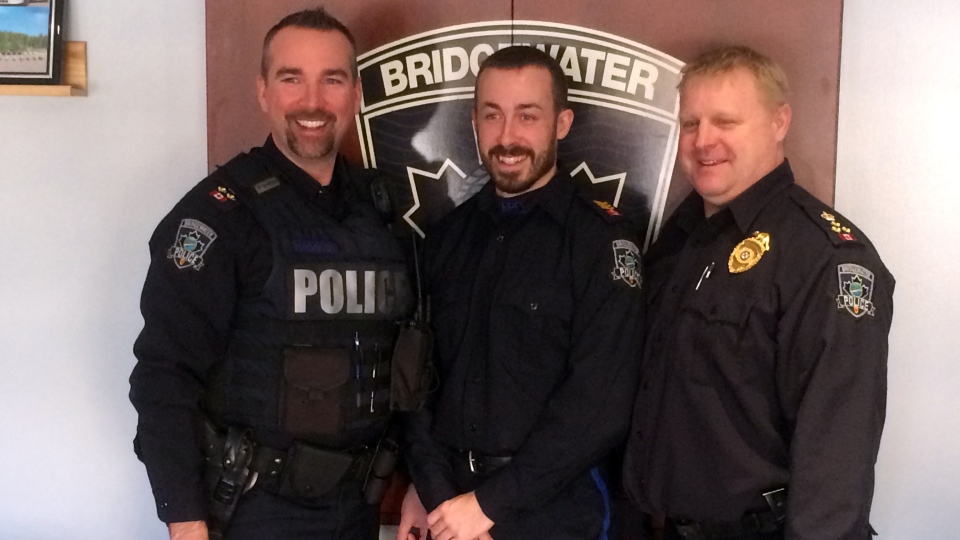 The charges against Doucette stem from an incident at the Bridgewater Hotel on High Street, where officers with the Bridgewater Police Service responded to a domestic violence call around 11 p.m. Monday.

Police allege Doucette attacked the responding officers with an edged weapon, stabbing one officer in the neck.

He then fled the scene on foot. The weapon wasn’t recovered at the scene.

Sgt. Matthew Bennett, a 13-year member with the Bridgewater Police Service, sustained serious injuries. He was taken to hospital, where he underwent surgery on Tuesday.

Police say his surgery was successful and he is recovering in a Halifax hospital.

The domestic violence victim, who is Doucette’s common-law partner, had sustained minor injuries before police arrived. She was treated in hospital and has since been released.

Police say she is no longer at risk and is in a safe location.

The incident prompted police to set up a perimeter in the south end of Bridgewater Tuesday morning, after Doucette was spotted in the area.

An emergency alert was also issued shortly after 6 a.m., Tuesday, warning residents that the suspect was at large.

Additional resources, including RCMP, the Emergency Response Team, multiple K9 units and a Department of Natural Resources helicopter, joined the search as it stretched into Tuesday afternoon and evening.

Investigators weren’t certain of Doucette’s whereabouts for much of the day, but police received a report of a possible sighting in the LaHave River around 1 p.m. Tuesday.

Police tried to apprehend him as he fled on foot into the woods off Highway 331 near Conquerall Mills Road. Police say he stabbed a police dog during that time and evaded arrest. The dog’s handler was not injured.

"Our police dog and handler were assisting Bridgewater Police yesterday afternoon when they sighted the individual coming out of the river," said Clarke. "The individual stabbed the police dog with what is believed to be a stick, as I understand it, causing an injury to the dog, then he fled the scene."

The animal was taken to a local veterinarian for treatment.

On Twitter, the RCMP said the dog "bravely protected his handler while in the line of duty." They said Fergus is being closely monitored by a veterinarian and they are "very hopeful" he will recover.

Police say Doucette will also face charges in connection with the dog’s stabbing.

POLICE WARN DOUCETTE SHOULD NOT BE APPROACHED

Doucette is 31 years old. Police describe him as an Indigenous man with brown hair and green eyes. He is six-foot-two inches tall and weighs 220 pounds.

He was last seen wearing black shorts. He was not wearing a shirt or shoes.

Police warn that Doucette may be armed with a knife and should not be approached if spotted. Anyone with information is asked to contact police.

The RCMP's critical incident command has taken over the search for Doucette.