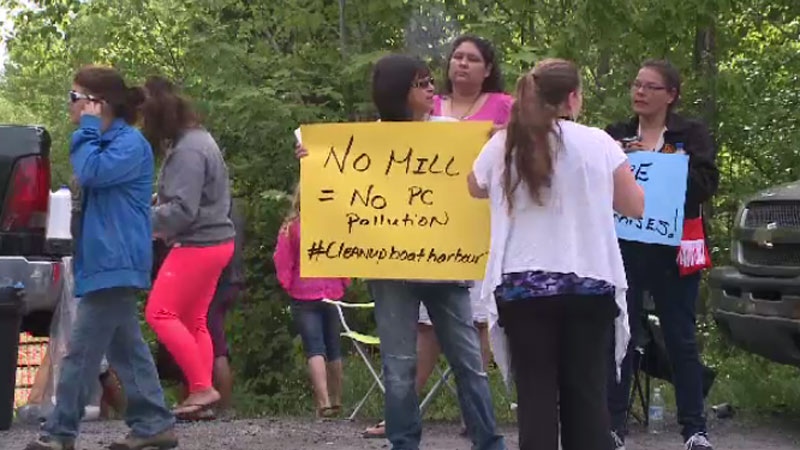 ABERCROMBIE POINT, N.S. -- The Nova Scotia government has reached a deal with a First Nation community on the cleanup of a harbour nearly a week after aboriginal protesters launched a blockade of a broken wastewater pipe.

The agreement in principle gives the government until June 30, 2015, to introduce a bill with timelines for stopping effluent from the Northern Pulp mill from going into Boat Harbour near Pictou Landing.

The government said Monday the deal also formalizes its commitment to remediate the site.

The agreement came after discussions over the weekend with Pictou Landing Chief Andrea Paul and the band council. Paul could not be reached for comment.

The government said negotiations over "reasonable timelines" would take place in the coming weeks.

Residents of Pictou Landing set up a peaceful blockade last Tuesday after a wastewater pipe from the mill started leaking effluent into wetlands and the East River, prompting Northern Pulp to shut down operations.

Cleanup crews and pumper trucks were permitted access to the site, but the protesters said they wouldn't allow workers to repair the pipe until they received a commitment from the government and the mill on the cleanup of Boat Harbour.

He said crews would immediately begin the process of fixing the pipe so that operations at the mill can resume as soon as possible.

"This has been a long week for our workers and their families," MacKenzie said in an email. "We are all looking forward to carrying out the inspection and repair and getting the mill operational later this week."