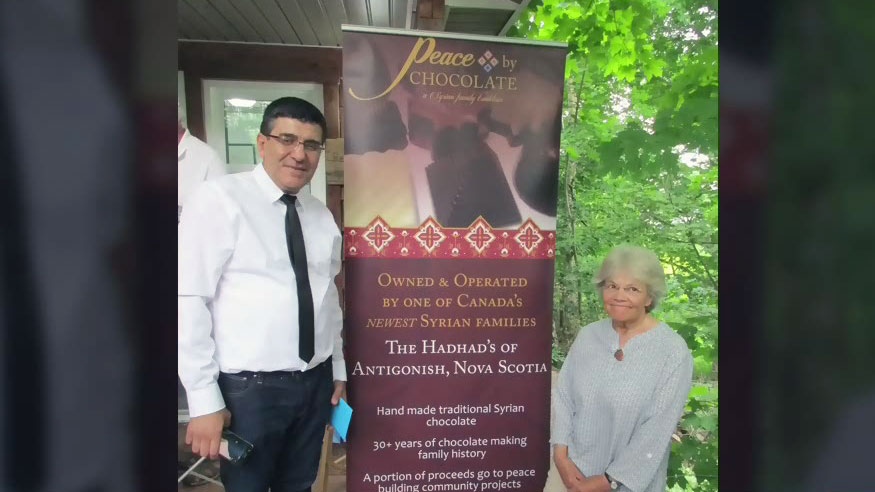 ANTIGONISH, N.S. -- A year ago, members of the Hadhad family were living as refugees after fleeing the war in Syria -- but now they're running a booming chocolate business in Nova Scotia with Prime Minister Justin Trudeau telling their story at the United Nations.

Trudeau opened his speech to the Leaders Summit on Refugees at the UN in New York Tuesday by talking about Peace by Chocolate, which opened last month in Antigonish and has begun hiring local employees.

"We are so proud that he picked our story to be the inspiring story for him in his speech at the United Nations in front of the leaders of the world," Tareq Hadhad said Wednesday.

The Hadhads came to Antigonish in January after fleeing to Lebanon from Damascus, where Tareq's father Isam ran a successful chocolate factory with 30 employees.

Tareq Hadhad said the company shipped specialty treats all over the Middle East, including to Yemen, Jordan and Lebanon. They were in the process of arranging exports to Europe when the factory was destroyed in a bombing in 2012.

Hadhad said his father decided to move the family after the fighting started.

"My father said, 'I don't want to lose any of the family,"' Hadhad said. "We stayed four nights in the basement without food or electricity. We moved to downtown Damascus (from the southern suburbs) where it was safer, and then to Lebanon."

In Antigonish -- a place Trudeau referred to as "home to a bunch of big-hearted Canadians" -- Hadhad said the family was greeted with overwhelming support from various sponsors and the residents.

He said his father began making his chocolates as a way to give back, even donating some profits to the relief effort to help the people of Fort McMurray who were displaced by wildfires.

He said the company is called Peace by Chocolate because his father wanted an appropriate name to reflect what his new life in Canada means to him.

"It's a greeting for us, instead of hello or good morning," he said.

He said when his father decided his kitchen wasn't big enough to make his chocolates, the community turned out to help.

"Fifty volunteers helped us build a shed next to our house," Hadhad said.

Hadhad said they have been flooded with emails, phone calls and visitors since the prime minister's speech, and he expects it will provide a big boost for the small company working towards success.

Hadhad said they've already begun looking for new space for storage as they build up inventory ahead of the holidays.

That's welcome news to Antigonish Mayor Carl Chisholm, who said the Hadhads and the speech by the prime minister have put his community in the spotlight.

"I don't think you could buy any kind of advertising that would measure up to what the prime minister had to say," Chisholm said.

"It is a beautiful story and for him to mention it at the United Nations, what more can I say? Wow."

Chisholm said his community has always benefited from newcomers, noting that many of the local farmers are Dutch immigrants.

"We benefit by these people coming here and starting a small business. I think we've lucked out here with the Hadhad family," he said.

...the brand I mentioned in my remarks today at the UN is @PeacebyChoco, started by a Syrian refugee family in Antigonish. Check them out!