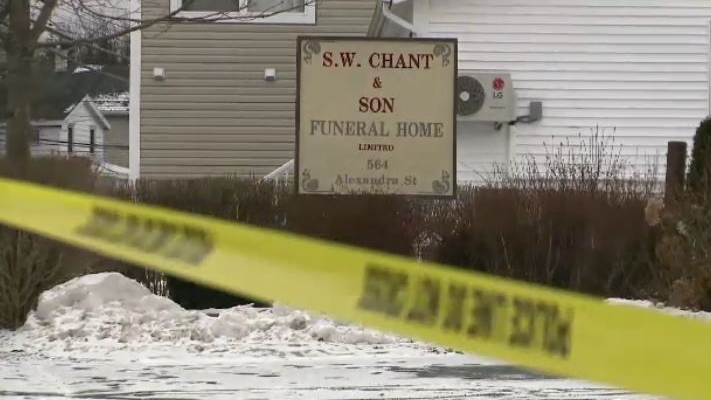 Cape Breton Regional Police launched a fraud investigation into S.W. Chant and Son Funeral Home several weeks after a suspicious fire at the home in February 2019.

HALIFAX -- A former employee of a Cape Breton funeral home has had her funeral director licence revoked following a finding of misconduct that included the reuse of caskets.

The Nova Scotia Board of Registration of Embalmers and Funeral Directors says a two-day inquiry held last month found Jillian Nemis guilty of non-compliance with the act governing her profession.

"I am absolutely shocked and disappointed by the choices made by this funeral director and the funeral home, particularly when you consider their position of trust with families," board chairman Adam Tipert said in a statement Monday.

The board found Nemis's actions while working at S.W. Chant and Son Funeral Home in Sydney, N.S., were fraudulent. It says she committed professional misconduct through the reuse of caskets intended for a single funeral and by providing funeral director services for an unlicensed funeral home.

The Dec. 8 decision says people who had paid to have a body placed on a so-called "insert" inside a rented casket were instead having the body placed in a conventional casket -- with a fabric lining -- for the funeral ceremony.

After the ceremony, the decision says, the bodies were transferred to a cardboard container for cremation, and a complainant to the board said the casket was "cleaned of any stains and fluids and placed back out for reuse."

The decision says this practice is prohibited. It says in the case of rented caskets, bodies should be placed in wooden inserts in the rental casket.

It says normally, after six to 10 inserts are used, a supplier requires a funeral home to purchase a new rental unit because its structures may begin to be compromised.

The funeral home charged $1,375 for use of the rental units, but inspectors found that in six of nine rental contracts from 2018, the body arrived at the crematorium "in cardboard cremation caskets, not the wooden casket insert they would have purchased."

During the hearings, Nemis denied cleaning caskets for reuse, but the board accepted the evidence of three former funeral home employees who testified it was common practice.

The inquiry also found that Nemis provided funeral director services for an unlicensed home when she arranged a service after Chant's licence had been suspended in February.

Nemis has three months to appeal the Dec. 8 decision to the Nova Scotia Supreme Court.

The board issued a news release Monday saying the case should prompt changes to funeral legislation, including allowing the board to immediately suspend a funeral director's licence before a hearing when their actions "put the public at risk."