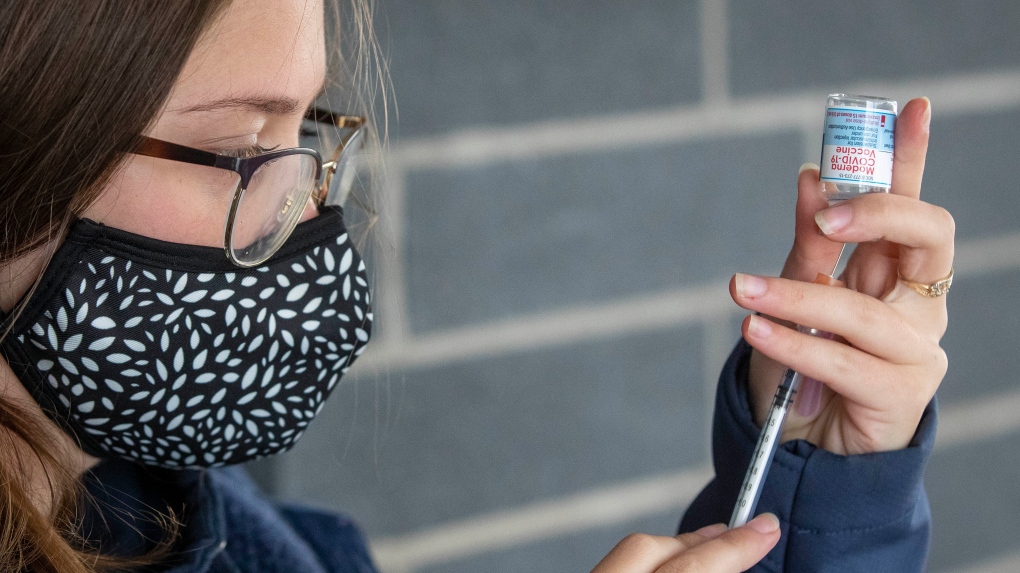 Georgia Mates, prepares a Moderna COVID-19 vaccine ahead of a drive-thru clinic at Richardson stadium in Kingston, Ont., on Friday, Jul. 2, 2021. THE CANADIAN PRESS/Lars Hagberg

Nova Scotia is reporting a rise in COVID-19 cases and hospitalizations for the month of July, while the number of deaths decreased compared to previous months, according to the provincial government’s monthly COVID-19 summary.

During July, health officials say nine people died from COVID-19, six fewer than what was reported for the month of June.

Of the nine deaths, six people were aged 70 and older, and three were living in a long-term care facility.

During the month of July, Nova Scotia reported a total of 8,650 positive PCR tests, 900 more than what health officials reported in June.

Health officials are reporting the province saw 225 hospitalizations for COVID-19 during the month of July.

Additionally, the monthly update shows a rise of 81 in hospitalizations in July compared to June.

The province says Nova Scotians aged 70 and older are 14 times more likely to be hospitalized with COVID-19 than those between the ages of 18 to 49.

The Swedish national seismic network says it detected two explosions close to unusual leaks on two Russian natural gas pipelines running under Baltic Sea to to Germany. It registered one blast early Monday southeast of the Danish island of Bornholm and a slightly larger one later that night northeast of the island.

Most P.E.I. residents without power two days after Fiona

Hurricane Ian tore into western Cuba on Tuesday as a major hurricane, with nothing to stop it from intensifying into a catastrophic Category 4 hurricane before it hits Florida on Wednesday.

Canadian employers project the national average base salary to increase by 4.2 per cent next year, a new survey says.

A graduated driver's licence program in Alberta that has been in effect for the past 19 years is getting an overhaul.

An American who returned to U.S. soil last week after being held by Russian-backed forces for more than three months said Monday that it's "surreal" to be back home.

Watch the moment NASA rammed a spacecraft into an asteroid

A high-speed NASA spacecraft veered toward an asteroid on Monday – and rammed into the rock deliberately.