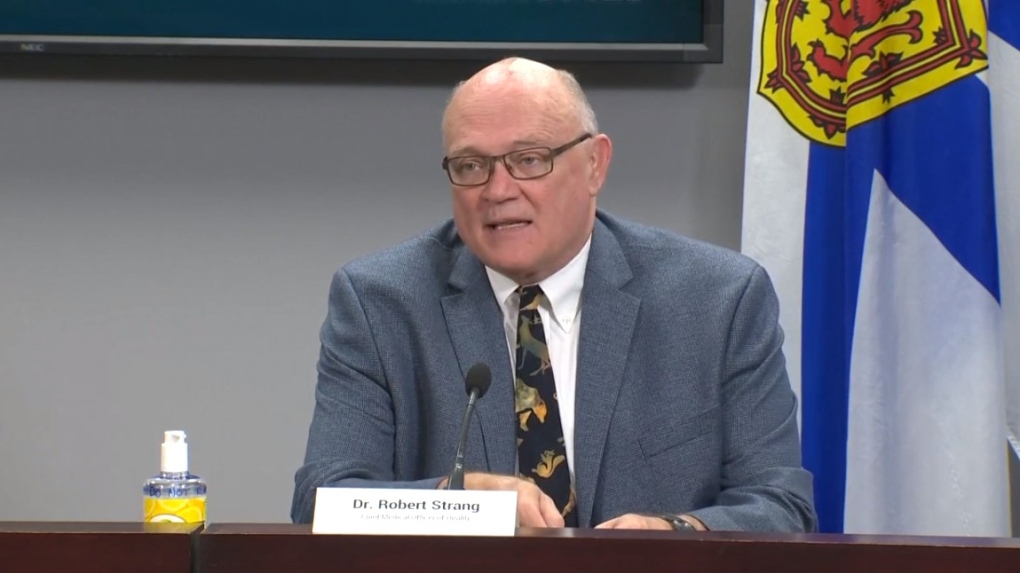 Dr. Robert Strang, Nova Scotia's chief medical officer of health, provides an update on COVID-19 during a news conference in Halifax on July 9, 2020.

HALIFAX -- There are no new cases of COVID-19 in Nova Scotia and the provincial government says one more case is considered resolved.

The total number of COVID-19 cases remains at 1,066, but 999 cases are now resolved and 63 people have died, leaving only four active cases in the province.

The last case was reported on Wednesday, involving a Nova Scotia truck driver who travelled outside Canada as an essential worker.

Chief Medical Officer of Health Dr. Robert Strang provided an update on the case during a news conference in Halifax on Thursday.

“Yesterday’s new case is a Nova Scotian who works in the movement of people and essential goods and that individual had travelled … outside of Canada and that was the source of their exposure outside the country,” said Strang.

“As with the cases that we reported last week, the two cases -- the one from the weekend and the one from yesterday -- our contact tracing has found minimal numbers of people who have been identified as close contacts, so that’s good news for all of us.”

Masks are not mandatory in Nova Scotia, but Strang said public health has made a “strong recommendation” to wear a non-medical face mask in certain situations, such as grocery shopping and on public transit.

“It’s a way we keep each other safe by each of us wearing a mask. Masking is one piece of our efforts around controlling the spread of COVID-19. It’s important that people understand that masks are part of the package I’ve been talking about.”

Strang said the topic of face masks is an ongoing conversation among Canada’s chief medical officers of health.

Some cities, such as Toronto, Montreal and Ottawa, have made face masks mandatory.

“If we need to go down the road of mandatory, we are ready to do that,” said Strang.

The new school year begins in less than two months, but the Nova Scotia government still has not released its education plan.

Premier Stephen McNeil said Thursday that a plan is in the works and it will be communicated to families and teachers “in the coming weeks.”

Residents of New Brunswick, Prince Edward Island and Newfoundland and Labrador are no longer required to self-isolate when travelling to Nova Scotia.

Losing track of time? Researchers say this may be why

Quebec forbids dancing at bars, orders no alcohol sales after midnight to limit spread of COVID-19

'We can't let up': Key issues to address before second wave of COVID-19