HANTSPORT, N.S. -- As the owner of The Barking Bean Café in Hantsport, N.S., Glenn Deering usually spends his days pouring coffee for customers and stocking his shelves with food and goodies for canines.

But lately, he's had to expand his offerings in-store, to make up for lost revenue due to pandemic restrictions on how many customers he can have in his café. So, he started bringing in some apparel to sell, namely leggings.

After recently placing an order for holiday-themed leggings, he thought nothing of it when a box from the apparel supplier arrived via Canada Post earlier this week.

But he got a surprise when he opened the box up.

"Just opened it up and noticed a hard black case," he says, "and I said 'OK, this is not leggings.'"

He opened up the plastic case and couldn't believe what he saw.

"To my surprise, it turned out to be a 9mm handgun," said Deering.

There was no ammunition in the package -- it's illegal to ship firearms with ammunition in Canada – but there was paperwork with the semi-automatic 9mm pistol.

That paperwork showed the gun was meant for a buyer in Ontario. The gun model requires a Restricted Possession and Acquisition Licence (RPAL) to purchase in Canada.

Deering says he called Windsor District RCMP for help, since he does not have a RPAL and knew it would be illegal for him to have the gun in his possession.

The RCMP confirm that the gun in question is now in their custody.

RCMP spokesperson Sgt. Andrew Joyce informed CTV News in an email that "the firearm was sent in a lawful manner from a licensed firearms business in Ontario, to a licensed individual, to whom the registration certificate and authorized [sic] had been issued by the Canadian Firearms Program."

CTV News contacted the apparel company Deering had ordered the leggings from. A representative with "Leg Smart" told CTV News in an email that the company had been made aware of the situation. Liza MacDonald says the company would have shipped its product out in a compostable mailer, not in a cardboard box.

MacDonald says the company contacted Canada Post, which she says "treated the matter as if it were simply a lost parcel," and that there had been no further communication. 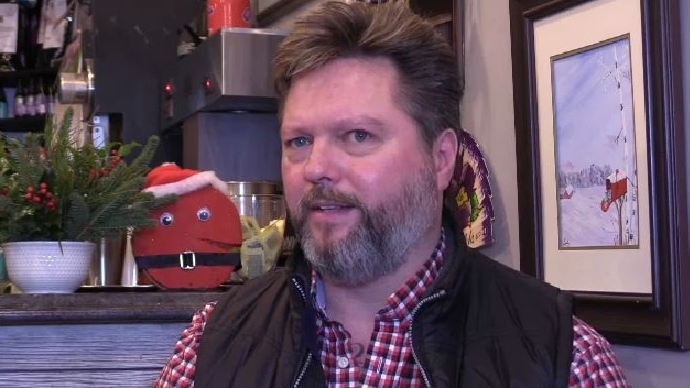 Glenn Deering is the owner of The Barking Bean Café in Hantsport.

Deering says close inspection of the parcel he received provided a clue as to what went wrong.

"The shipping label came off of my package somehow and ended up on top of this other one," Deering said.

A photo of the package taken by Deering does appear to show his label affixed over another.

As to how that happened?

"Good question, that's the part now that's really questionable, trying to figure out where and how the label came off the shipping bag of the leggings onto a cardboard box," Deering says, "and directly over the label that was on the box."

Canada Post did respond in an email to inquiries from CTV News. "This incident is being investigated," writes Valérie Chartrand, media relations representative with the Crown corporation.

"We thank our customer for bringing the item to the RCMP and for bringing this situation to our attention. We are in contact with the customer and apologize for this incident. We don't have further details to share at this time."

Deering says, with the postal service being so busy this holiday season, he wants to caution anyone receiving parcels in the mail to check their packages carefully.

"Just don't assume that it's the items that you originally ordered and go ahead and wrap any boxes," he says. "Heaven forbid you wouldn't want to see that, this item could have ended up in the wrong hands."

The RCMP says it's grateful Deering did the right thing.

As for his original order of holiday leggings, without a shipping label, the package is long gone.