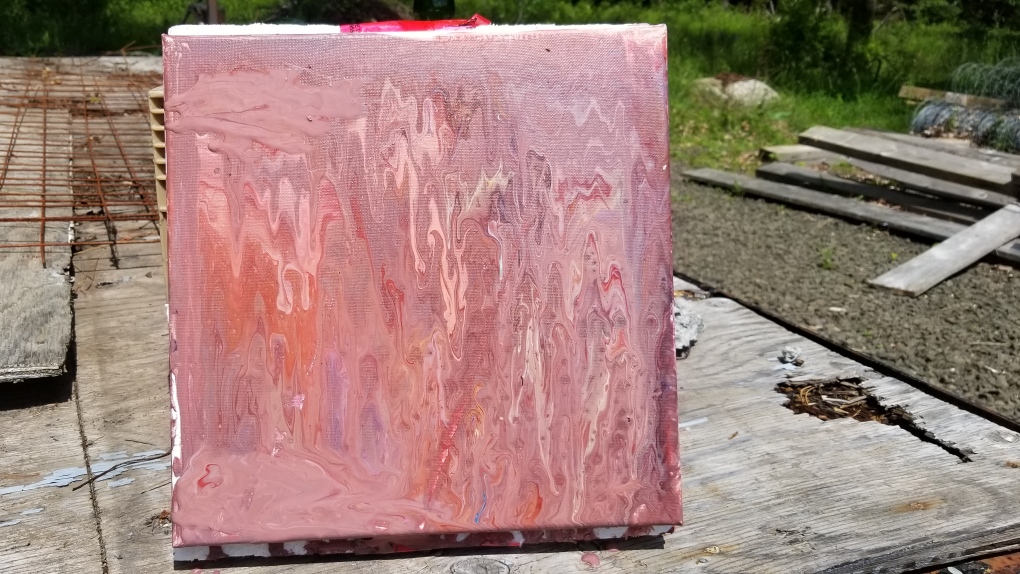 A capsule launched by the Annapolis Royal Space Agency contained an interior balloon that burst and showered acrylic paints on this canvas. (COURTESY DERICK SMITH)

ANNAPOLIS ROYAL, N.S. -- A space club in Annapolis Royal, N.S., launched a weather balloon on Saturday that created an abstract painting on an enclosed canvas as it returned to Earth.

Derick Smith, a teacher at Annapolis West Education Centre who oversees the club, says it's an example of how physics and art can come together.

The balloon was filled with helium and expanded to three times its size as it ascended, eventually exploding at about 32.8 kilometres above the Earth.

At that point, a styrofoam capsule with a parachute attached drifted back down to Earth, landing about 13 kilometres away, near Lamb's Lake, Annapolis County.

The capsule contained an interior balloon that burst and showered acrylic paints on the canvas.

The Annapolis Royal Space Agency -- a group made up of Smith's students and community members -- are behind the project, now in its fourth year.

The painting will be displayed at the ARTsPlace gallery where Smith also works, as part of an exhibition recognizing the 50-year anniversary of the moon-landing exhibition.

Smith said the project is also helping to remember Chick Caldwell, a former education assistant at the high school.

"We were down at the art gallery and he was with us and he passed away looking at a painting on the wall that was done by his wife," Smith said.

"All of the capsules are called Chick one, two, three and this year four."

There's a picture of him on the interior of the capsule.