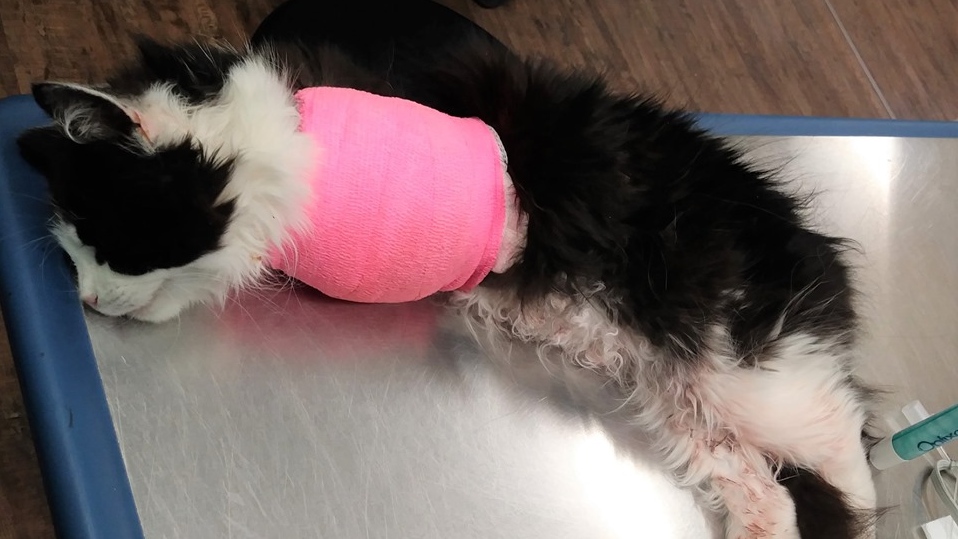 Pheobe the cat is recovering after being shot with a gun in her leg, which had to be amputated. (Nova Scotia SPCA)

The Nova Scotia SPCA is investigating after a domestic cat was shot in Dominion, N.S., on Saturday.

The SPCA says their enforcement officers responded to an after-hours emergency call and found an injured black-and-white female cat on Gillis Lane. The officers took it to the SPCA’s Cape Breton medical hospital for emergency care.

“The cat was shot with a .22 caliber gun. The bullet perforated the back leg and lodged in the front leg shattering the bone,” says Jo-Anne Landsburg, SPCA chief provincial inspector. “This is an act of senseless violence and we would like to talk to anyone with information about the cat or the incident.”

Phoebe the cat is now recovering after undergoing an emergency medical amputation at the SPCA Cape Breton Animal Hospital.

The SPCA says the cat will spend several weeks recovering under close medical supervision.  Surgery and follow-up care is being funded by donors to the SPCA.  Animal lovers who want to help support the cat’s long road to recovery can visit a fundraising website.

Anyone with information, or who may have witnessed the incident, is asked to call the SPCA’s confidential toll-free hotline at 1-888-703-7722.