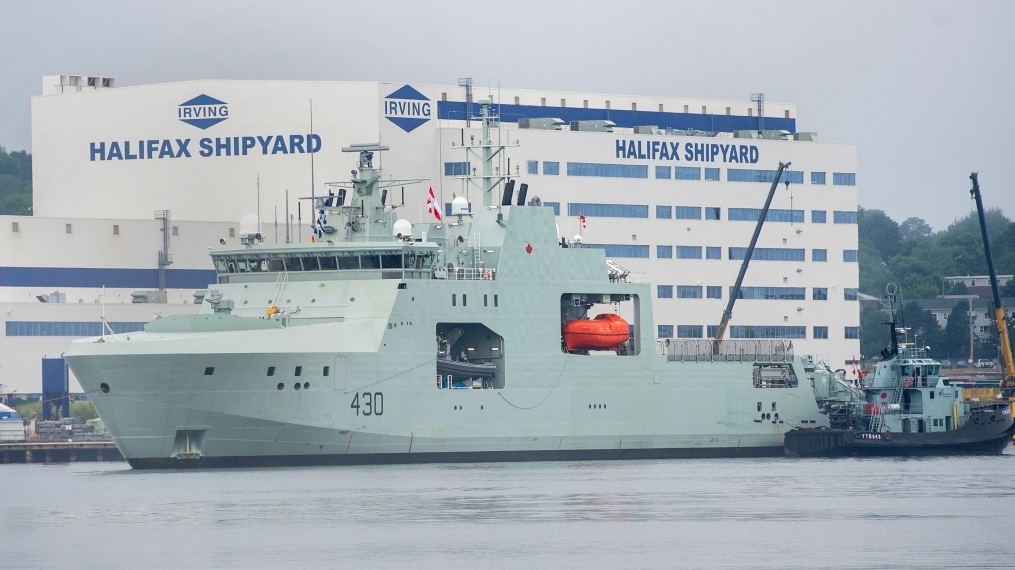 HMCS Harry deWolf heads from the Irving-owned Halifax Shipyard on its way to being delivered to the Royal Canadian Navy dockyard in Halifax on Friday, July 31, 2020. THE CANADIAN PRESS/Andrew Vaughan

The problem first emerged last week as HMCS Harry DeWolf's crew were training off the coast of Halifax, 2 1/2 months after Irving Shipbuilding delivered the vessel to the Navy.

Commodore Richard Feltham, commander of Canadian Fleet Atlantic, says the ship was forced to return to port after its freshwater generator and communications systems didn't work.

It was while the ship was docked that the crew found the cooling pumps on two of the ship's four diesel generators had broken.

The problems with the freshwater generator and communications system have been resolved, according to Feltham, who said the navy is confident about the causes and solutions.

Though the cooling pumps were also fixed and the Harry DeWolf is back at sea for training, Feltham said the navy is investigating why to ensure there isn't a systemic problem.

"This pump issue that we're facing now, we will figure out if it's just an anomaly of a certain pump or something else," he said in an interview from Halifax on Thursday.

"Right now I don't know if I need to replace all the pumps or not. Perhaps it was just organic material on the pump. I don't know yet. It'd be premature to say. So we'll do an investigation."

Despite the uncertainty, Feltham expressed confidence in the Harry DeWolf, which was finally delivered to the navy at the end of July, five years after Irving started work on it and two years later than scheduled.

It is the first of six new Arctic offshore patrol ships being built for the Navy by Irving. The Halifax shipyard is building two more for the Canadian Coast Guard, for a total cost of around $5 billion.

That amount includes jetty and fuelling infrastructure, initial spare parts, technical data, crew training and a contingency fund in addition to the cost of the actual ships.

"This is the first of that class coming out of the shipyard and I think the shipyard has built us a really fantastic ship," said Feltham, noting the Harry DeWolf headed back to sea on Saturday.

"And unlike cars or planes, there are no prototypes, right. So when we make the shift for the first time, it's inevitable that we will find things that are different, or we want to work on or fix or work through."

Technical issues during a newly designed ship's first extended period at sea are not uncommon, Irving spokesman Tom Ormsby said, adding the cooling-pump issue did not put the ship or sailors at risk.

"We are co-ordinating with (the Defence Department) and working with the equipment manufacturer and will take further action as necessary when the ship returns to port," Ormsby added.

"Lessons learned from the build and operation of the lead vessel in this brand-new class are being incorporated in the build and testing of subsequent (Arctic and Offshore Patrol Ship) vessels."

University of Calgary shipbuilding expert Timothy Choi nonetheless expressed surprise at the problems and wondered why Irving didn't uncover them during its own sea trials before delivering the ship to the navy.

While the navy's assertion that the problem was with the seals on the pumps narrows the search for a cause, Choi said such seals have little tolerance for error. That raises concerns about a broader issue.

"The seal ensures a gap of no more than tiny fraction of a human hair between the rotating and non-rotating parts, which means incredibly minute factors can affect the seal's effectiveness," he said.

"Identifying the cause of this will be of direct application and relevance to the rest of the Harry DeWolf class."