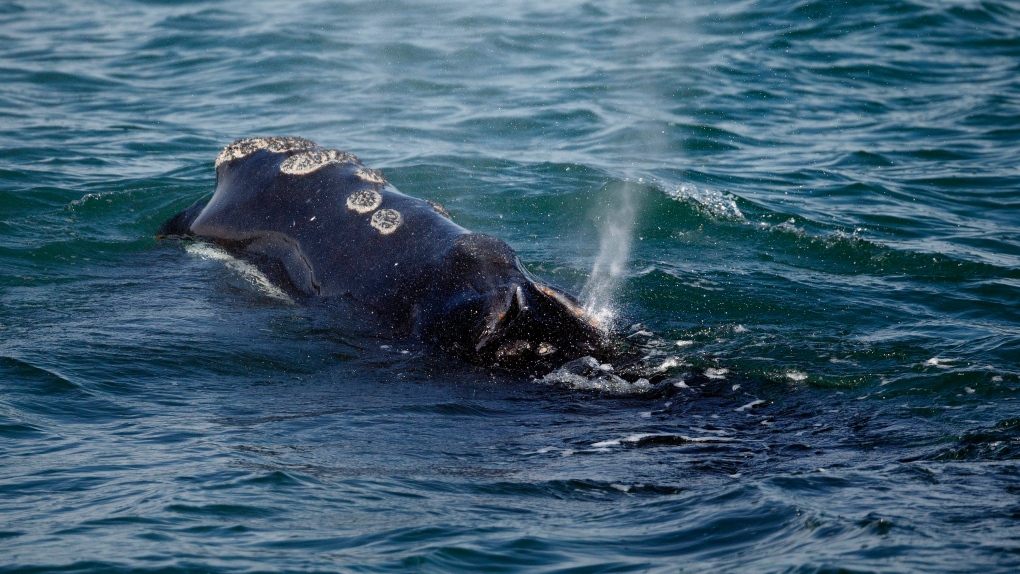 HALIFAX -- Necropsy results indicate a North Atlantic right whale found in waters off the eastern U.S. in September died after being entangled in Canadian fishing gear.

The 40-year-old male known as Snake Eyes was last seen entangled in the Gulf of St. Lawrence on Aug. 6 off the Magdalen Islands. Its badly decomposed carcass was discovered off Long Island, N.Y., on Sept. 16.

The Atlantic Marine Conservation Society did the necropsy a few days after the whale was found.

"They (scientists) determined that the likeliest cause of death was entanglement," said Jennifer Goebel, a spokeswoman for the fisheries arm of the National Oceanic and Atmospheric Administration.

Goebel said the necropsy found no evidence of blunt force from hitting a vessel. While the internal organs were "significantly decomposed," no signs of disease indicated death from natural causes.

No gear was found on its body but Goebel said scientists found wrap marks on the whale that matched what had been observed when the animal was last seen entangled.

"They were able to find linear wounds that were wrapping the rostrum and pectoral flippers as well as wounds to the fluke, which is the tail," Goebel said. "Those were consistent with what was documented while the animal was alive, as were the head wounds."

Death from entanglements, she said, can be "rather gruesome" for marine animals.

"Animals can get severe cuts from the entanglements, it can limit their ability to forage, they can get infections from the cuts -- it's a very painful way to die."

So far this year, eight right whale are known to have died in Canadian waters out of an endangered population numbering about 400 animals. Twenty-nine right whales have died in North American waters since 2017.

It's believed the death of Snake Eyes is the first this year as a result of entanglement. Three other whales were also sighted entangled in the Gulf this year.

Goebel said it's not certain the fishing gear spotted on the whale last summer was Canadian but the evidence points that way.

The whale that was first observed by scientists in 1979 was well known to Phillip Hamilton, a research scientist at Boston's New England Aquarium who helped identify the dead animal.

In an interview in September, Hamilton said the whale got its name from two bright white scars on the front of its head.

He said it wasn't totally unexpected for Snake Eyes to have been found where he was because right whales tend to range up and down the eastern seaboard of North America at various times of the year.

Hamilton also said climate change is disrupting the feeding areas for the whales, which partly explains why they are showing up in larger numbers in the Gulf of St. Lawrence.

The Canadian Press first published this story on Nov. 3, 2019.