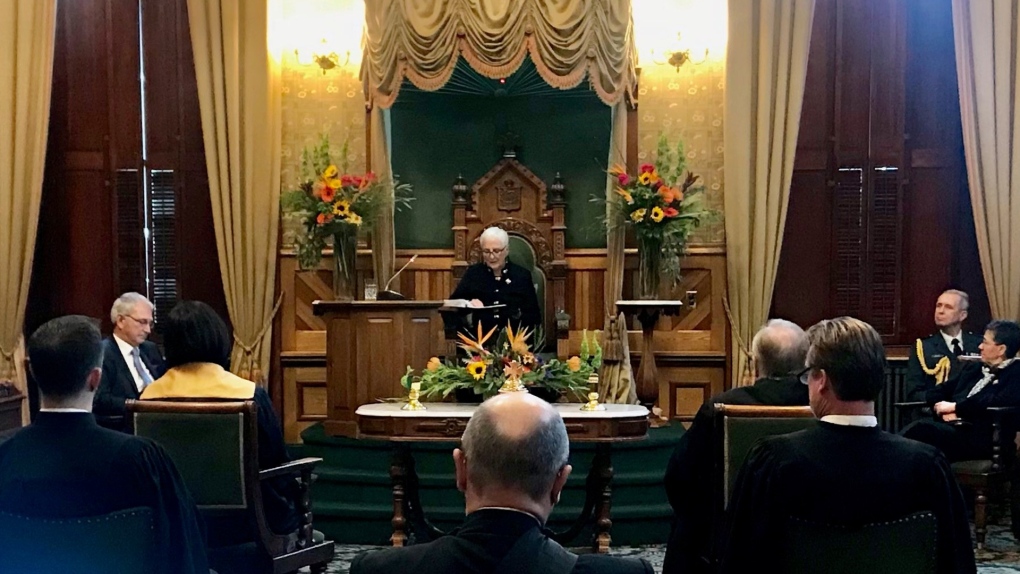 FREDERICTON -- Premier Blaine Higgs' government congratulated itself Tuesday for handling the COVID-19 pandemic better than most jurisdictions, saying in a throne speech that New Brunswick had received "positive reviews from across Canada."

Higgs' Progressive Conservatives, who won a majority in an election two months ago, spelled out their legislative priorities -- but much of the speech was focused on thanking New Brunswickers for their strength and resilience.

The speech, which opened a new session in the legislative assembly, was read aloud by Lt.-Gov. Brenda Murphy. "This session opens in the midst of unprecedented times, when our province and indeed the entire world, continues to face an unpredictable and prolonged global health pandemic," she said.

"Amidst it all, New Brunswickers have proven to be resilient and strong. The people of the province have come together, working collaboratively to flatten the curve of the COVID-19 pandemic and to keep one another and our province safe."

The speech crowed about the fact New Brunswick's efforts to slow the spread of COVID-19 have resulted in one of the lowest infection rates in the world. Since the pandemic was declared by the World Health Organization on March 12, New Brunswick has recorded 379 cases and six deaths.

The government reminded New Brunswickers that the province's economy was reopened earlier than most, and its speech cited Statistics Canada figures showing the province had regained lost jobs faster than any other province by August.

"We are proud that New Brunswick has received positive reviews from across Canada for our handling of the pandemic thus far and our early opening of the economy," the speech said. "We will continue to apply the lessons learned on how to deliver services more effectively, work more productively and leverage technology to continue to move our province forward."

The Tories' election win on Sept. 14 marked the first provincial election in Canada since the start of the pandemic. Notably absent from the speech was any formal response to repeated calls from Indigenous leaders for an independent, Indigenous-led public inquiry into systemic racism in the province.

The Wolastoqey and Mi'kmaq chiefs asked for an inquiry following the fatal shootings of Chantel Moore and Rodney Levi -- two Indigenous people killed by police in June. Mi'kmaq leaders also called for immediate reforms to the justice system, including improved police training and increased Indigenous involvement in police oversight.

Higgs has consistently rejected those requests, and the speech did not mention those issues.

On Monday, the Wolastoqey Nation issued a statement saying neither Higgs nor anyone from his cabinet had reached out to the six Wolastoqey chiefs since the election.

"Wolastoqey leaders are troubled by the silence and indifference they are receiving from the Higgs government," Chief Gabriel Atwin of the Pilick First Nation said. "We called on government to launch an inquiry into systemic racism within 30 days of the election. Here we are and the government continues to refuse to listen."

Tuesday's throne speech, however, commits the government to supporting Indigenous entrepreneurs; responding to the federal inquiry into missing and murdered Indigenous women; and expanding the teaching of the Mi'kmaq, Passamaquoddy and Wolastoqey languages in provincial schools.

As with most throne speeches, this one described the government's legislative agenda in broad terms, relying on vague, aspirational language. But there were some notable pledges in the document:

-- Increase immigration and repatriation to grow the population by 10,000 people per year by 2027.

-- Introduce amendments to the Climate Change Act to regulate greenhouse gas emissions for large emitters in order to reduce their emissions intensity by 10 per cent by 2030.

-- Grow the number of companies in the province that export, from three per cent to closer to the national average of five per cent.

-- Reduce wait times for hip and knee replacements to reach the national benchmark of six months or less.

-- Draft a five-year plan for mental-health care and addictions.

"This is a critical turning point for New Brunswick and your government is prepared to seize it," the speech said.

"Despite the fact that uncertainty remains, and COVID-19 related expenditures are significant, the amount of over-expenditure to date has been mitigated due to the commitment of New Brunswickers to limit the spread of the virus by upholding public health guidance."

This report by The Canadian Press was first published Nov.17, 2020.