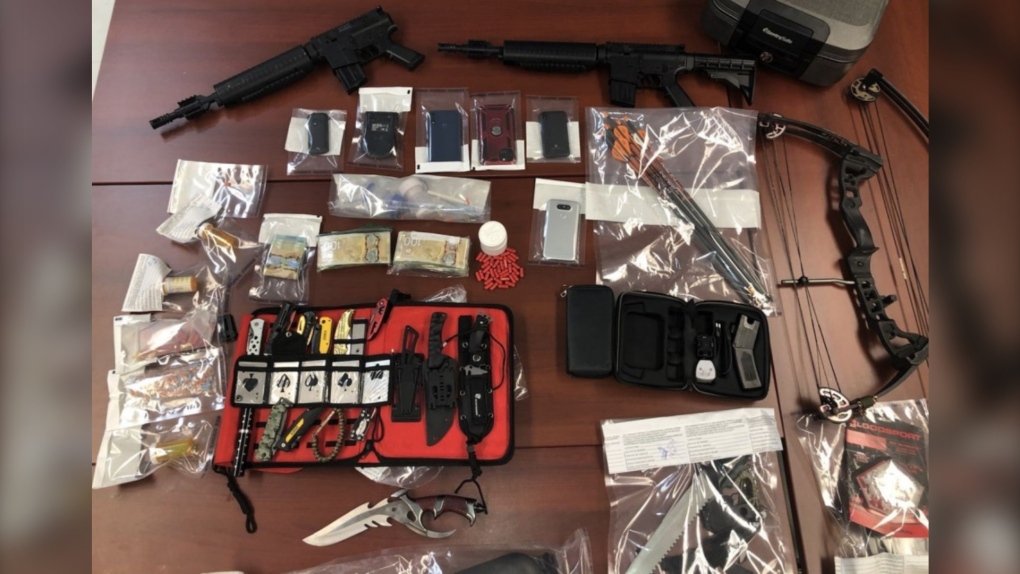 A photo supplied by police appears to show a compound bow in addition to the seized items they listed. (Photo: New Brunswick RCMP)

HALIFAX -- New Brunswick police say a man is facing charges after they seized drugs, prohibited knives, brass knuckles, and other items from a home.

The Codiac Regional RCMP says officers went to a home on St. George Street in Moncton on Sunday as part of an ongoing investigation into stolen property. While at the home, police say they saw drugs and prohibited weapons "in plain sight."

Police say they secured the scene, and later executed a search warrant.

During the search, the RCMP says its officers found the following:

The RCMP arrested a 38-year-old Moncton man at the scene.

Joseph-Paul Corey Hart appeared in Moncton Provincial Court on Monday, facing the charge of possession of hydromorphone for the purpose of trafficking.

He remains in custody and is scheduled to appear in court again on Wednesday for a bail hearing.

A previous version of this story identified a weapon in the image supplied by the RCMP as a crossbow. A reader has informed CTV News it is more accurately descibed as a compound bow. The image caption has been updated.