"We're able to fulfill our commitment to move to Phase 2," New Brunswick Premier Blaine Higgs said during a news conference on Wednesday afternoon. "We have arrived at this point ahead of schedule thanks to those who got fully vaccinated as soon as they were eligible. Because you took action to protect yourself, your family and everyone around you, we are now able to further loosen restrictions."

Higgs says 20.2 per cent of those 65 and older have received their second dose of a COVID-19 vaccine, which was a target to move to the second phase. The province had hoped to reach the target by July 1. More New Brunswickers have had their first dose, too, with that total reaching 75.4 per cent as of Tuesday.

Two other requirements to enter Phase 2 have also been met: hospitalizations had to remain low and all health zones had to remain at the Yellow alert level.

"We are making steady progress," said Dr. Jennifer Russell. "We have passed two important milestones, but we can't stop now. Our goal is to get as many New Brunswickers vaccinated. Until this is done, we cannot let our guard down."

Russell said that as of next Monday, every New Brunswicker who has had their first dose of a COVID-19 vaccine will be able to get their second dose, as long as 28 days have gone by since their first dose.

New Brunswick is getting a large shipment of Moderna vaccine and Russell says that public health will be able to fully vaccinate all eligible people in the province within the next several weeks.

"Moderna and Pfizer are interchangeable," Russell said. Most people got Pfizer as their first dose, but she said they use the same mRNA technology and are equally safe and effective.

"There are new and deadly variants that increase the risk among those who are unvaccinated, or only partially vaccinated," Russell said.

That's why it's important for people to continue to wear a mask, maintain physical distance, clean hands – and keep an eye on symptoms, she said.

"With each passing day, we are reducing the risk of new outbreaks of COVID-19 in New Brunswick," said Russell. "But we will not eliminate that risk completely. In the weeks ahead, we need to continue to wear a mask in public indoor places, maintain two metres of physical distance from others, wash our hands regularly, get tested when we have symptoms and get a second vaccine dose when we are eligible."

Here's a list of the significant changes in Phase 2, which New Brunswick will enter at midnight on Wednesday. The government outlined them in a news release sent Wednesday afternoon: 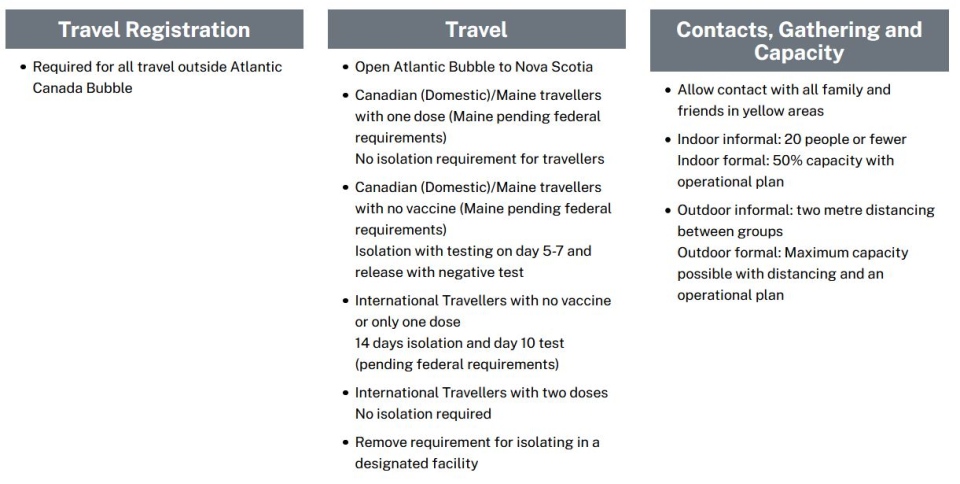 New Brunswick Public Health says all other restrictions will remain in place, including the use of masks, based on a health zone’s alert level. Anyone planning to travel outside New Brunswick should check that province's rules before leaving.

"Travellers from outside the Atlantic provinces will be required to show their registration and proof of vaccination when crossing into New Brunswick from Quebec or at an airport," Public Health wrote in a news release. "Travellers should anticipate delays at the Quebec border when entering New Brunswick, and it is recommended that they consider crossing the border outside of peak hours, during the evening or at night if possible to avoid traffic."

New Brunswick also reported three new cases, one each in Zone 1, Zone 3, and Zone 6 – and all are close contacts of previously confirmed cases.

There have been 2,305 confirmed cases in New Brunswick since the pandemic began. Since Tuesday, 30 people have recovered, lowering the number of active cases to 58. Six patients are hospitalized in New Brunswick, including two in an intensive care unit.

The outbreak was declared on May 25, after a confirmed COVID-19 case at the memory care home in Shediac (Zone 1). Public health says staff and residents were re-tested several times to confirm the end of the outbreak.

"We would like to thank the staff of the facility and our partners at the Provincial Rapid Outbreak Management Team, the Horizon and Vitalité Health Networks, the Department of Social Development and the Canadian Red Cross for their continued support to this vulnerable sector," Russell said.