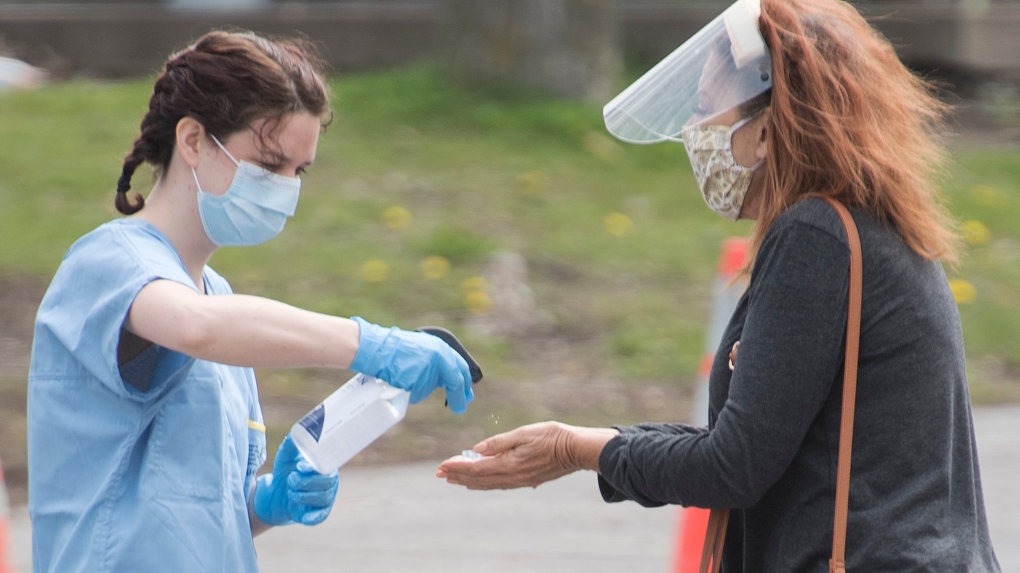 A health-care worker sprays disinfectant on a woman's hands at a mobile COVID-19 testing clinic in Montreal, Sunday, May 17, 2020, as the COVID-19 pandemic continues in Canada and around the world. THE CANADIAN PRESS/Graham Hughes

There are two cases in the Saint John region (zone two). They involve one person in their 20s, and another in their 30s.

Another case in the Fredericton region (zone three) is a person in their 30s. All of these people are self-isolating, according to Public Health.

There is one case in the Edmundston region (zone four). It involves a person in their 20s, and is under investigation.

There are two cases in the Miramichi region (zone seven) involving two people in their 50s. Both of these cases are linked to previous ones.

Public Health says all people in the six cases are self-isolating.

According to Saturday’s media release, a possible exposure has been confirmed at Gretna Green Elementary School in Miramichi, and the school community has been notified.

The school is closed this week for March break.

New Brunswick has set up a mass asymptomatic testing clinic in Miramichi in an effort to determine if there has been any further spread in that region.

No appointment is necessary, and Public Health says self-isolation isn’t necessary while waiting for results from asymptomatic testing.

New Brunswick has had 1,454 cumulative COVID-19 cases since the start of the pandemic. Since Friday, four people are considered to be recovered.

In total, 1,389 people have recovered from COVID-19 in New Brunswick, and 28 people have died.

Three people are in New Brunswick hospitals with COVID-19, two in intensive care.