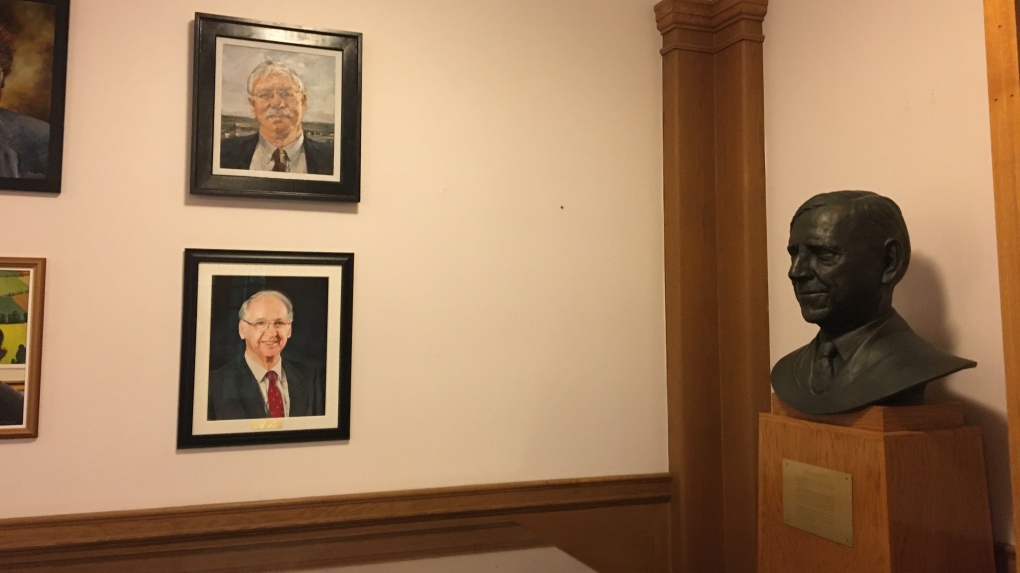 An empty space on the wall in the second floor lobby of Ludlow Hall at the University of New Brunswick in Fredericton, N.B., is shown on Thursday, October 31, 2019. (THE CANADIAN PRESS/Kevin Bissett)

FREDERICTON -- Pressure is mounting to have the University of New Brunswick remove George Duncan Ludlow's name from its law faculty building in Fredericton because of his connections to slavery and indigenous abuse.

With the debate over Ludlow's legacy gaining traction, someone has removed his portrait from the building's lobby.

It's unclear who moved the painting from Ludlow Hall, but faculty members say it was removed without any discussion.

Questions directed to the office of John Kleefeld, dean of the law faculty, were not answered. Instead, he issued a statement saying university president Paul Mazerolle is establishing a working group to explore naming conventions.

"The cross campus working group will also explore the naming .... issue generally and will recommend the next steps for addressing the naming of Ludlow Hall," Kleefeld said in the email.

A resolution adopted by the Law Students' Society last month calls for Ludlow's name to removed from the building without delay.

Last week, the UNB Student Union called for its immediate removal from the building and from all maps and university literature.

"The University of New Brunswick Student Union calls for the creation of a plaque that appropriately contextualizes Ludlow's place in New Brunswick history, highlighting both his contribution to the drafting of New Brunswick's first statutes as well as his upholding of slavery, and his commitment to separating Indigenous children from their parents and culture," the student group said in a statement.

Nicole O'Byrne, a law professor and legal historian at the university, said Ludlow was a loyalist from New York who became New Brunswick's first chief justice in the 1780s.

"Faculty researched Ludlow prior to the opening of Ludlow Hall in 1968 and found the issue of the decision on slavery," O'Byrne said in an interview.

"They raised the issue that maybe this would not be the best name for the building. The president went ahead with the name -- the decision had already been made."

She said it was later learned that Ludlow was also a longtime member of the board of directors for the Sussex Vale Indian Day School, which contracted out First Nations children as indentured servants.

O'Byrne said she started hearing about Ludlow from students in 2015 as the Canada's Truth and Reconciliation Commission completed its final report.

"The students started discussing it then, and over the last four years I've seen more and more students raise the issue," she said.

O'Byrne said she's concerned that if Ludlow's name and portrait are removed without any explanation, such move would amount to erasing history.

"I would be more interested in seeing the portrait up there along with an explanation of the contested legacy of George Duncan Ludlow, and maybe another exhibit that explains the history of slavery in the Maritimes and the history of day schools and residential schools," she said.

In late January of last year, the City of Halifax removed a statue of Edward Cornwallis, who founded the city in 1749. The removal was considered an act of reconciliation over a Cornwallis proclamation offering a bounty to anyone who killed a Mi'kmaw person.

Then, in August of last year, a statue of Sir John A. Macdonald, Canada's first prime minister, was removed from the steps in front of Victoria City Hall, also as a reconciliation gesture over his part in creating the country's residential school system.

Meanwhile, the University of New Brunswick has not said how soon it will address the Ludlow issue, but O'Byrne said students are hoping for an answer before the end of the school year in April.

This report by the Canadian Press was first published Oct. 31, 2019.