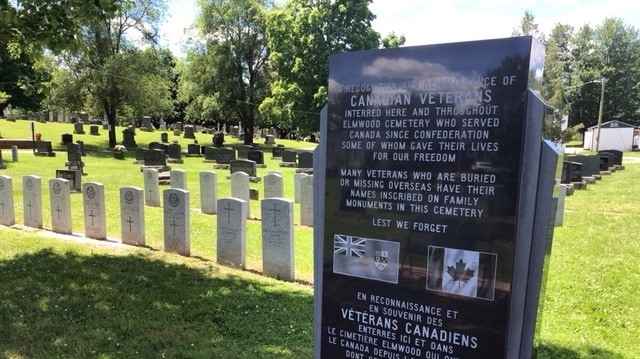 A memorial at the Elmwood Cemetery commemorating Canadian veterans is seen on July 4, 2022 in Moncton.

There are over 30,000 people buried inside Moncton's Elmwood Cemetery, and roughly 340 of them are Canadian veterans.

The oldest and largest cemetery in the city erected a new memorial last November, but the pandemic pushed back the official unveiling ceremony until Monday.

Ian Gunn, the president of the not-for-profit cemetery, said the new memorial was funded by Veterans Canada and the cemetery,​ and is a reminder of the atrocities of war.

"You take a look at what's going on around the world right now, Ukraine is being devastated by war. If we don't remember what happened in the past, we can never look to the future. We will just repeat ourselves constantly,” said Gunn.

He says the memorial doesn't glamourize war in any way but rather commemorates those who made the ultimate sacrifice.

"If we don't remember these things, we don't learn from them. It's not about building bigger and better ships, or better weaponry or anything like that. It's remembering the horrors of war and trying not to do it again," said Gunn.

Cemetery lot chairman Jim Rogers' grandfather served with Canada in the First World War and fought in the battles of Vimy Ridge and Passchendaele. His father landed on Juno Beach in France and eventually helped liberate Holland from the Nazis.

Rogers travelled to Holland with his father for the 60th and 65th anniversary of the liberation of the country and saw first-hand what Canadian soldiers meant to the Dutch.

"I went with my dad to a Grade 1 classroom and you have six-year-old kids walking up and thanking him for their freedom. That means a lot to me," said Rogers.

Asked why it's still important to remember soldiers who died decades ago, Gunn recalled a story of a First World War soldier from Alma, N.B., who was once asked the same thing.