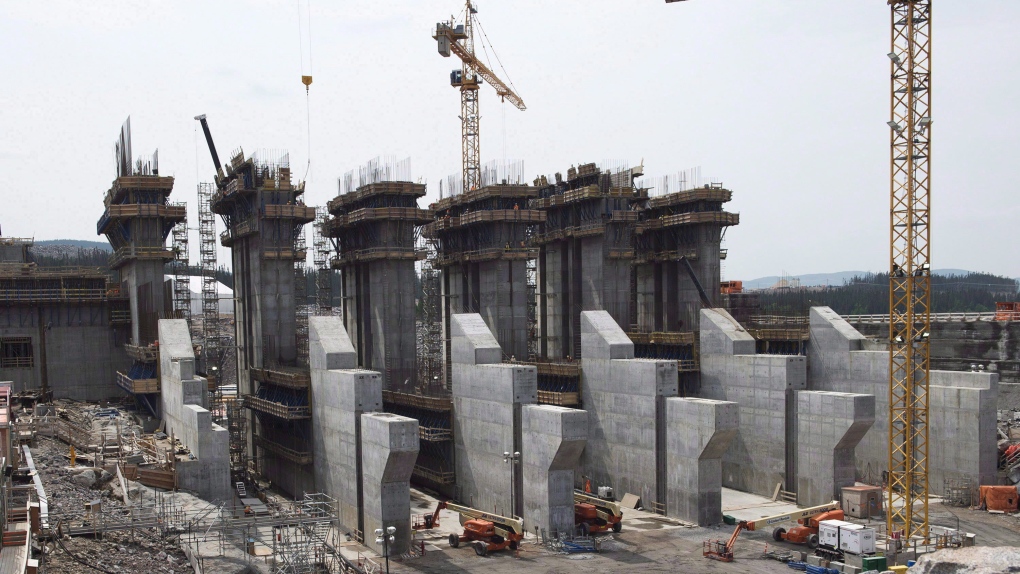 The construction site of the hydroelectric facility at Muskrat Falls, Newfoundland and Labrador is seen on Tuesday, July 14, 2015. (THE CANADIAN PRESS/Andrew Vaughan)
HALIFAX -

The proposed energy corridor to connect the four Atlantic provinces to hydroelectricity from Quebec and Labrador is important for helping the region reach zero carbon emissions, but the project isn't enough, a new study suggests.

When coal is phased out, demand for electricity will increase, according to the study released last week by Enviroeconomics and Navius Research, on behalf of the Halifax-based Ecology Action Centre. The Atlantic region will need more than the proposed $5-billion Atlantic Loop corridor to meet future demand and keep the region off fossil fuels, said the study, titled "Assessing Net-Zero Electricity Supply and Demand Models in the Atlantic Loop."

"The modelling suggests that Atlantic Loop scenarios that supply low-emitting hydro from Newfoundland and Labrador or Quebec are important to meeting future demand," the study said. "Several uncertainties, however, suggest that a balanced approach to the (energy) supply mix is likely the prudent path forward."

It will be particularly important for Nova Scotia and New Brunswick to find sources of electricity to complement the future Atlantic Loop, the study said, noting that those two provinces are the only ones in the region that still have coal-fired generating plants.

The study said that in New Brunswick, the federal government has not agreed to extend the life of the Belledune generating station beyond 2030, while Nova Scotia continues to operate four coal and petroleum coke-generation plants. The largest, in Lingan, N.S., has a 620-megawatt capacity.

Both provinces have committed to phasing out their coal-fired generation by 2030, while Nova Scotia has enshrined in law its goals to reduce greenhouse gas emissions to at least 53 per cent below 2005 levels by 2030 and to achieve net-zero emissions by 2050. There is also a pledge to have 80 per cent of the province's energy supplied by renewable sources by 2030.

The study warns the modelling it uses to measure the costs of the Atlantic Loop is uncertain because the price tags of large projects are "typically" underestimated while the costs of renewable energy sources could fall faster than anticipated.

It also points out that future electrical supply from Quebec and Newfoundland and Labrador to feed into the Atlantic Loop "may be a question" given the competition for low-emitting power from the United States and Ontario.

"We conclude a portfolio approach that includes developing more domestic renewable generation while exploring Atlantic Loop opportunities is a prudent approach to meeting future electricity needs under a net-zero and fossil-free future," the study said.

In a recent interview, Gurprasad Gurumurthy with the Ecology Action Centre said energy costs will be high in the future if more renewable energy such as wind and solar isn't brought online. And while electricity rates will rise initially when coal is phased out, consumer bills will drop over time as more energy is transferred into the grid, Gurumurthy said.

"It has to be done," Gurumurthy said about launching the Atlantic Loop or installing a second sub-sea connection to the delayed Muskrat Falls hydroelectric project in Labrador. "The solution is going to be complete collaboration between our institutions, the government and utilities."

Gurumurthy said the Atlantic Loop project is technically feasible, adding that all that's left is the political will and negotiations between the provinces.

"There is the potential for the establishment of this loop," he said.

The Atlantic premiers have had discussions in recent months with Ottawa about funding for the Atlantic Loop, but there has been no federal commitment to date.

"But as of right now there has been no formal request from our government to the federal government," Rushton said. "We are finalizing some initiatives to assess the actual total cost."

Rushton admitted that if something is to happen, it will have to be sooner rather than later.

"We have some pretty ambitious (climate) targets and 2030 is not that far away, so we do realize there are going to have to be some decisions made very shortly," he said.

This report by The Canadian Press was first published May 22, 2022.

A barge that ran aground near Vancouver's English Bay last year quickly became an accidental attraction, drawing selfie-seekers and inspiring T-shirt designs. But after seven months, residents seem to have grown weary of its hulking presence on the shoreline.