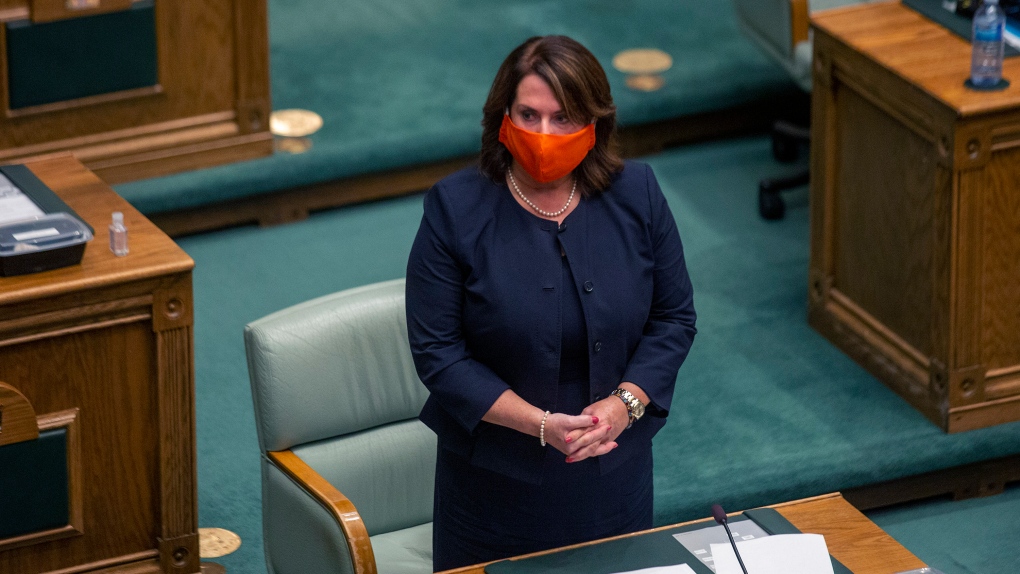 Newfoundland and Labrador Finance Minister, Siobhan Coady presents the 2020 provincial budget in the House of Assembly on Wednesday, September 30, 2020. (THE CANADIAN PRESS/Paul Daly)

ST. JOHN'S, N.L. -- The Newfoundland and Labrador government is projecting an $1.84-billion deficit for the current fiscal year -- a $309-million improvement from what it had forecast in July.

Provincial net debt is expected to reach $16.4 billion, or about $31,000 per person in the province. That figure includes $3 billion of borrowing this year.

Finance Minister Siobhan Coady said though $3 billion is a "huge number," it's $200 million lower than her department anticipated this summer.

"From a budgeting perspective, I think this is a very responsible budget, especially in the middle of a pandemic," Coady said.

The smaller deficit projection comes from unexpected funding from the federal government to help with pandemic-related costs and from an improvement in oil prices. Even so, the budget lists a $430-million drop in oil revenues since the 2019-2020 budget.

The budget does not factor in the federal government's recent announcement of $320 million to help the province's struggling offshore oil sector. The industry has been plagued by project delays and suspensions, including the indefinite delay of Equinor's Bay du Nord project, slated to be the first deep water project in the Newfoundland and Labrador offshore. Husky Energy also recently announced it was reviewing its plans for the $2.2-billion West White Rose project as well as its operations in the province.

Offshore oil royalties account for 7.5 per cent of provincial revenues in this year's budget, using a forecasted oil price of $39 per barrel. That figure reflects the current volatility in the global oil market, Natural Resources Minister Andrew Parsons said. "That's the situation we find ourselves in. It's one thing when you have government policy that stifles development, but this has nothing to do with government policy," he said.

The budget sets aside $3 million to launch a $25-a-day daycare program, which Education Minister Tom Osborne said will begin in early 2021, as well as $16.4 million toward the construction of an adult mental health and addictions facility in St. John's.

There will be $363.2 for Memorial University in St. John's, with $54.1 million of that earmarked for the faculty of medicine and $68.4 million to maintain current tuition levels for students from the province.

Wednesday's budget is the first to be delivered by the Liberal minority government since Andrew Furey became Liberal leader and premier in August. It comes halfway through the year because of delays associated with the COVID-19 pandemic.

The budget covers just six months of expenses and revenues and comes without a forecast for the next fiscal year. Earlier in the fall, Furey assembled an economic recovery team led by Moya Greene to review the province's finances. The budget indicates her suggestions will arrive by the next fiscal budget. When asked if Wednesday's budget was intended to hold the line until the bad news arrives with Greene's recommendations, Coady said, "It's certainly a hold-the-line budget. We're in the middle of a pandemic."

She said that without a federal budget, it's difficult to make forecasts beyond next spring. "It's more responsible right now to say, `In six months' time, we'll be able to lay out what future years looks like.' "

Coady said the budget shows the province has been able to hold steady with spending -- there was an increase of just $524 million from last year's budget -- but that Greene's task force will help the province "reimagine" its operations.

Furey has not yet been elected to the Newfoundland and Labrador legislature, but is running in a byelection next Tuesday in the Humber-Gros Morne district. There will be a provincial election some time before August 2021, but there's still no indication of when that might occur.