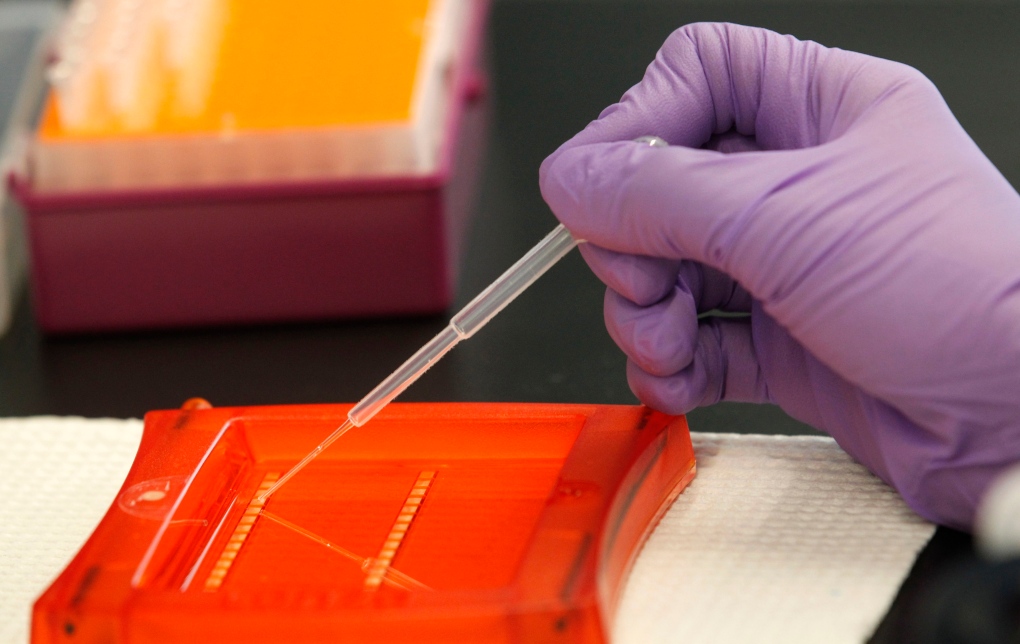 A scientist works with DNA samples in a New Orleans laboratory in this Sept. 29, 2011 file photo. (AP / Gerald Herbert)

ST. JOHN'S, N.L. -- A case of DNA cross-contamination in Newfoundland and Labrador has prompted a police review of homicide files and has defence lawyers scrutinizing how DNA evidence is handled.

The chief medical examiner confirmed in a Monday email that his office was notified by the RCMP on Sept. 30 that DNA from one homicide victim had surfaced in another case.

"It is, to the best of our knowledge, the first time there has been DNA cross-contamination implicating the office," Dr. Nash Denic's email read.

A spokesman for the Royal Newfoundland Constabulary said in light of the news, the police force's director of forensics reviewed homicide cases dating back to January 2016 and found no cause for concern.

Denic, who did not hold the chief examiner position at the time of the incident, said based on a review of the collection process at the office, he believes the DNA could have been transferred from a glove to a wooden tool used to scrape fingernails during an autopsy.

However, Denic noted his office "cannot be absolutely certain that this is the source of contamination."

Lloyd Strickland, the province's assistant director of public prosecutions, said his office received the report on homicide cases and will share the findings with legal teams in "appropriate cases."

One unrelated homicide trial was delayed last week as legal teams considered possible implications, but Strickland said he's not aware of any other cases affected.

"This incident has not, as far as we know, affected the strength or reliability of evidence in any particular case," Strickland said by phone on Monday.

He said the public prosecutions office will advise defence counsel in cases where the issue "might be relevant." He said lawyers "can deal with it in any way they want."

Last week, the St. John's murder trial of Steve Bragg was postponed after an application from the Crown.

Bob Buckingham, Bragg's lawyer, said the police investigation into past homicide cases encompassed the time period of the Bragg case and he agreed it was necessary to wait for the results.

On Monday, Buckingham said he hadn't yet seen the report from the police, but he hoped to have a chance to review it before an arraignment date next week to decide how to proceed.

Buckingham said the incident raises questions about how easily mistakes can be made when handling DNA evidence and how lawyers should interrogate that evidence.

"We become complacent in terms of assuming that things are done properly," Buckingham said.

"We have to have more expertise development among defence counsel about DNA and the handling of crime scenes."

Buckingham said the incident has highlighted the margin for error in what's considered a solid, reliable science.

He said lawyers will have to fill in knowledge gaps about crime scene handling, DNA collection and storage and forensic training, and develop skills to address those questions at trial given that the public -- including potential jurors -- are now aware of the mix-up.