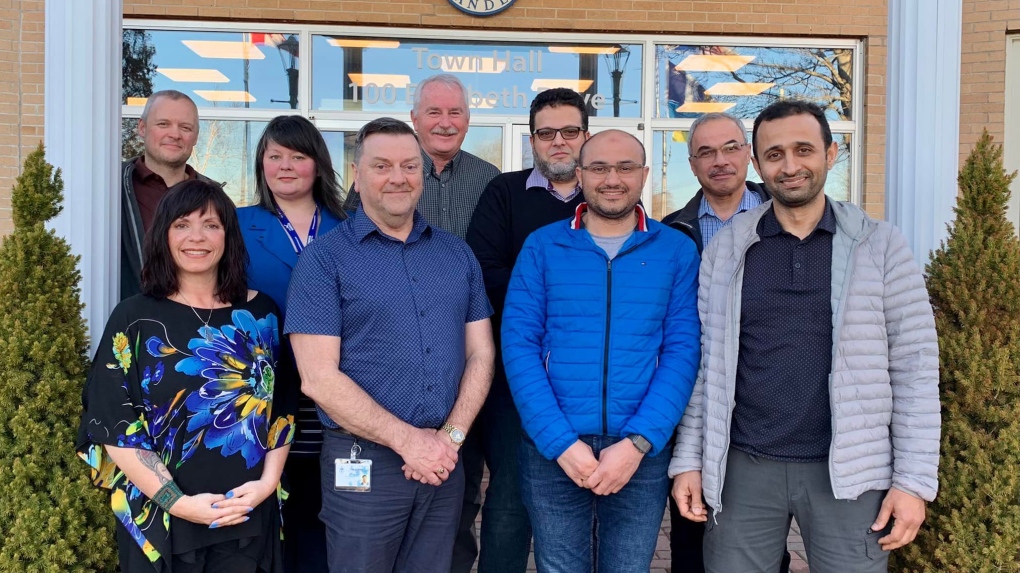 Mayor Percy Farwell, second from the front left, is shown in this Town of Gander posted this picture to its Facebook page on May 18 after a meeting with the Central Newfoundland Islamic Community. The central Newfoundland town of Gander is working with its local Muslim community to establish the town's first mosque — and to retain Muslim doctors. THE CANADIAN PRESS
ST. JOHN'S, N.L. -

The central Newfoundland town of Gander is working with its local Muslim community to establish the town's first mosque -- and to retain Muslim doctors.

Gander Mayor Percy Farwell and Dr. Mohamed Barasi, director of the Central Newfoundland Islamic Community, said Wednesday they hope a mosque will encourage Muslim doctors to stay in the region.

Farwell says there are several internationally trained Muslim doctors working in Gander, and that in the past, the town has had difficulties convincing them to stay. While he applauds the provincial government's efforts to attract international medical graduates, he said communities in need of their expertise have an important role in retaining them.

"Doctors are parts of families, and families have needs that go way beyond the professional life of the physician," Farwell said in an interview. "The rest of the community needs to be part of that."

Barasi, an orthopedic surgeon, said his community has been working with the Town of Gander for over a year to establish a mosque. Working together, they've since identified a suitable plot of land, he said.

"We started the conversation from nothing over a year ago," Barasi said. "To have the lot, in a year -- that's a big thing."

He said his group is now stuck in the paperwork process of establishing itself as a registered charity so it can begin fundraising to buy the land. The complicated process takes time and resources, and Barasi said he hopes someone will be able to help them with it.

Gander has a population of about 11,600 people and it's home to a busy regional hospital and health centre. Farwell estimates the local Muslim community to be about 55 residents, but he says that figure is closer to 100 if surrounding communities are factored in.

Barasi said a local mosque would serve a critical need for Muslims in Gander, as well as those in nearby communities.

"If you're a Muslim doctor working in Newfoundland, an international graduate -- after two years or three years, if you're able to go to Ontario, saying you got the same money, you'll go to Ontario," Barasi said. "You'll find a lot of mosques there, and you can go to the mosque in person instead of staying home. You can practise your religion in person."

During Ramadan this year, the town let the Central Newfoundland Islamic Community gather in a building at a city park, Farwell said.

Dr. Nizar Belgasem, a physician who had been practising in Gander since 2017 before taking a temporary leave for more training, said it made a huge difference.

"Before that, we used to go sometimes to one of our basements or something," he said in an interview Wednesday. "Everybody loved it; even children really enjoyed it. It's much easier when you have a place outside your home."

Both Barasi and Belgasem spoke effusively of the town's work and commitment to finding the local Muslim community a place to practise their faith. But Farwell said he was just as grateful for them, and for the Central Newfoundland Islamic Community's willingness to help the town make Gander a better place for them to live.

Ceremonies, marches and other gatherings are taking place across the country Friday as communities mark the National Day of Truth and Reconciliation.

A revived Hurricane Ian threatened coastal South Carolina and the historic city of Charleston with severe flooding Friday after the deadly storm caused catastrophic damage in Florida and trapped thousands in their homes.

BREAKING | Police 'dealing with a barricaded person' near Ont. hospital

There is a heavy police presence near a Mississauga hospital Friday morning as Peel Regional Police say they are currently "dealing with a barricaded person.”