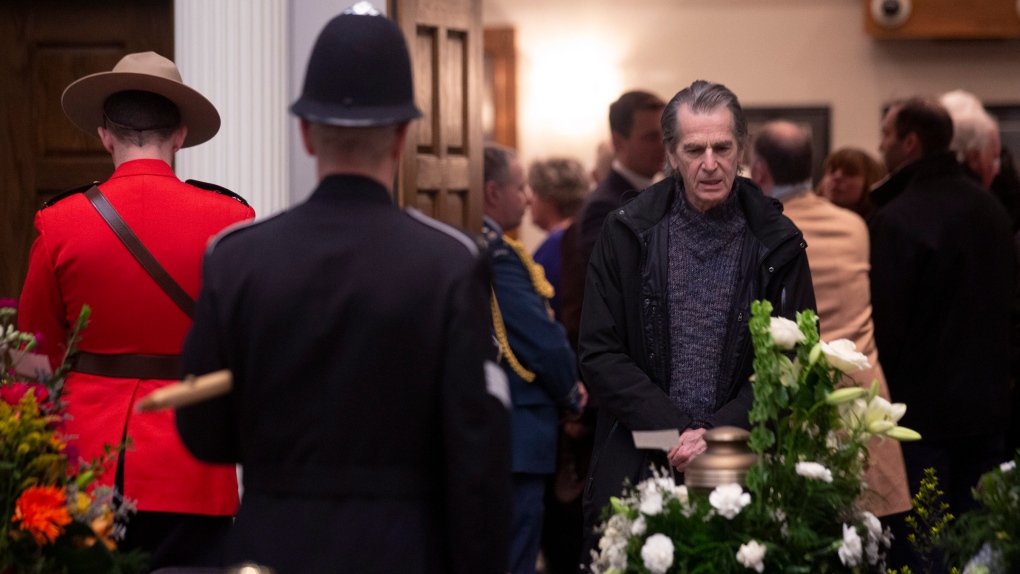 Well-known Newfoundland actor and comedian Greg Malone pays his respects to the remains of John Crosbie as they rest in state in the House of Assembly in St. John’s on Tuesday, January 14, 2020. (THE CANADIAN PRESS/Paul Daly)

ST. JOHN'S, N.L. -- The doors of Newfoundland and Labrador's House of Assembly were thrown open Tuesday as a stream of well-wishers paid their respects at a public visitation for federal politician John Crosbie.

The former federal cabinet minister and lieutenant-governor of the province, admired for his wit and his devotion to Newfoundland and Labrador, died Friday at age 88.

Staff estimated that over 120 people filed through the chamber within the visitation's first hour. People stood by the urn containing Crosbie's ashes, signed condolences and remembered a man who fought for his province's best interests and connected personally with constituents.

On the steps of the legislative building, where flags were lowered to half-mast this week, Chris Molloy shared childhood memories of the politician who visited his southern Newfoundland hometown and promised better times for the residents.

"John would come out to St. Shott's, and he would speak about how he was going to bring Newfoundland forward, and he certainly did. He was a real icon to our province," Molloy said.

"I would like for the rest of the politicians, not only in Newfoundland but across Canada, to learn some of John's traditions."

Exiting the House of Assembly where he'd just signed the book of condolences, Rob Strong echoed the sentiment that Crosbie was one of a kind. He said he got to know Crosbie through the oil and gas industry.

"I'm not surprised at all to see many of my colleagues from the oil and gas business here today," the veteran oil industry consultant said.

Strong fondly recalled Crosbie pitching in to secure funding for a memorial honouring the 84 workers who lost their lives when the Ocean Ranger offshore rig sank in 1982.

He said it's hard to summarize Crosbie's "phenomenal" impact.

"I can't think of another province, and I've travelled pretty extensively, that had a John Crosbie," Strong said.

Calvin Manning remembered Crosbie as a community-minded MP and family friend. He said Crosbie travelled from St. John's to St. Bride's, southwest of the capital, a few years ago to attend the funeral of Manning's father.

"I couldn't think of nowhere else to be today," he said. "There's been very few Canadians that have had the impact John Crosbie has had .... It's worth taking a few days to celebrate that."

Manning's son Jacob, 21, said he'd met Crosbie several times, and over the past week he's learned more about the late politician's career. "Though unfortunate, it's been a great learning experience to look back at his life," he said.

Visitation is to continue Wednesday at the House of Assembly from 2 p.m. to 6 p.m. Crosbie is the third person after former premiers Joey Smallwood and Beaton Tulk to receive the honour, reserved for the province's former premiers and lieutenant-governors.

A state funeral is scheduled for Thursday afternoon at the Anglican Cathedral of St. John the Baptist in St. John's, N.L. Former prime minister Brian Mulroney is expected to deliver the eulogy, with other past and present federal politicians in attendance.

This report by The Canadian Press was first published Jan. 14, 2020.