Next N.L. premier Furey a political newcomer, but a familiar face in the province 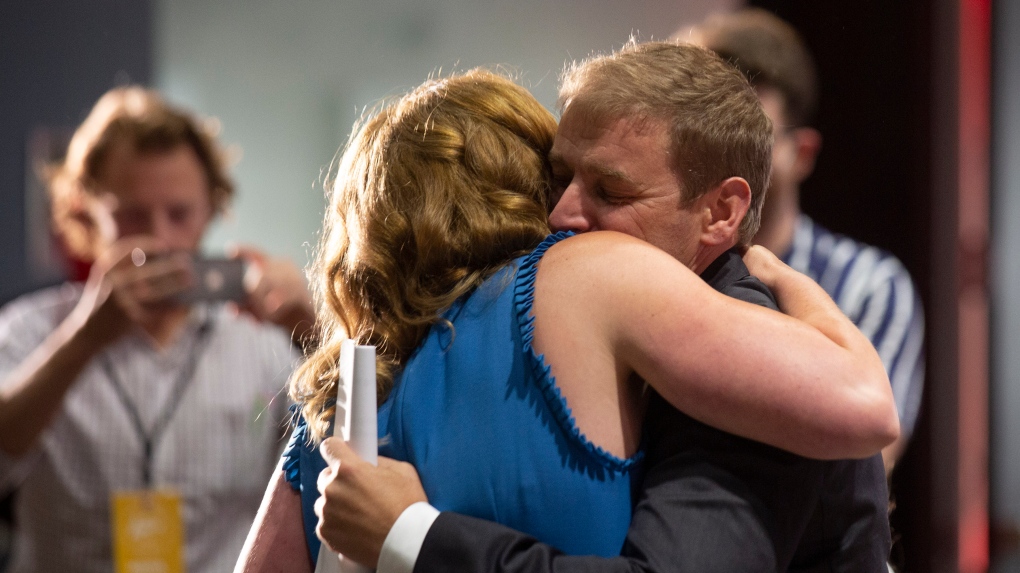 Dr. Andrew Furey is congratulated by his wife, Dr. Allison Furey as he is announced as leader of the provincial Liberal Party at the St. John's Convention Centre in St. John's, N.L. on Monday, August 3, 2020. (THE CANADIAN PRESS/Paul Daly)

ST. JOHN'S, N.L. -- Andrew Furey may be new to public office, but the province's premier-designate is a familiar face in Newfoundland and Labrador though his charity leadership and his family's political connections.

The 45-year-old orthopedic surgeon will take on the top political job in his home province after winning the provincial Liberal leadership Monday, bringing with him personal ties to provincial and federal politics.

His father George Furey is the current Speaker of the Senate, and his uncle Chuck Furey served as a provincial legislator. The younger Furey, born in St. John's, was involved in Liberal politics from a young age, volunteering on campaigns as a boy.

Furey is known for his charity work. He founded the medical non-profit Team Broken Earth in the aftermath of the earthquake in Haiti in 2010 and co-founded the mental health foundation A Dollar A Day with businessman Brendan Paddick and musician Alan Doyle.

The father of three was endorsed in his campaign by the majority of the sitting Liberal caucus, and he points to his charity and business experience as preparation for political office.

Furey will be sworn as Newfoundland and Labrador's 14th premier, succeeding Dwight Ball, at a date to be determined. He will be tasked with presenting a pandemic-year budget while confronting a deficit exceeding $2 billion, according to last month's fiscal update.

"This is not a crisis we can overcome in a short term. There's no magic bullet, but it is one that we need to take action on immediately," he said after his victory over John Abbott was announced.

"So let's begin. Let's get down to the tough decisions that need to be made. I tell you here today that I will always be completely frank and transparent with you as we move forward on this journey together."

Furey has proposed working with Ottawa and appointing a chief economic recovery officer to help steer the province though the difficult period.

This report by The Canadian Press was first published Aug. 3, 2020.