No one knows why the crows are dying in a Charlottetown park, scientists called in 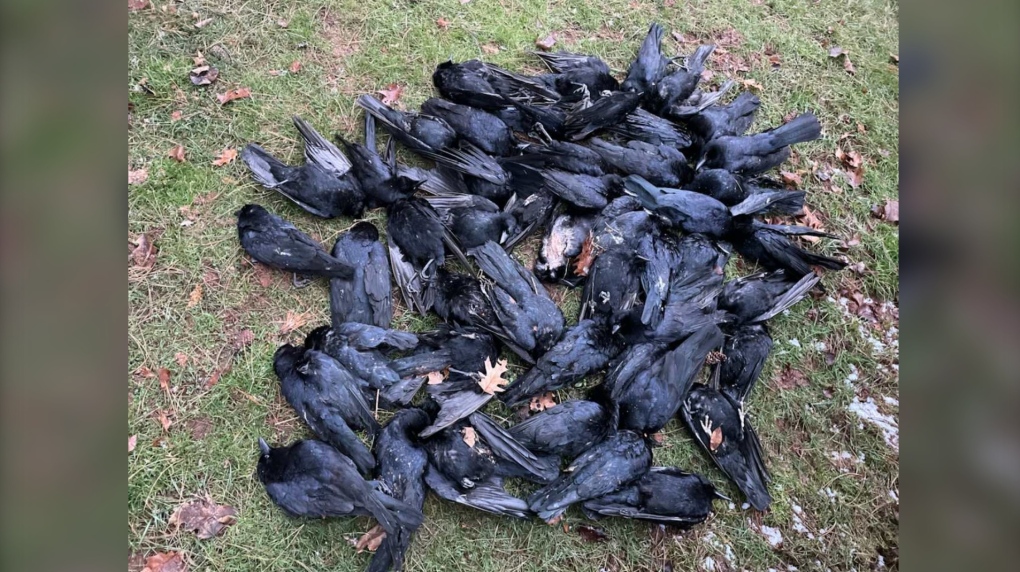 Dead crows are shown on Saturday, Jan. 1, 2022 in Victoria Park, which is near the waterfront in downtown Charlottetown. THE CANADIAN PRESS/HO-Katherine Laurence
HALIFAX, N.S. -

It was during the holiday break that something awful started happening to the crows that frequent Victoria Park in downtown Charlottetown.

Since then, local residents have found more than 200 dead or desperately ill birds. Scientists at the nearby Atlantic Veterinary College haven't been able to figure out what is going on.

"It was pretty gruesome," Maryrose Carson, who lives two blocks from the waterfront park, said Tuesday as she recalled finding dozens of dead birds on Jan. 1. "We had no idea what had caused it."

The college has ruled out avian flu or a bacterial infection, and there has been speculation that a so-called reovirus is to blame -- a theory that is being subjected to laboratory testing, Carson said.

There's also concern that whatever is killing the birds could spread to other wildlife or domesticated animals, which is why the college is pressing for answers before the end of the week. A spokeswoman for the college declined to comment until the results are in.

A flock of 25,000 birds roosts in the park every night in the fall and winter, prompting an annual outpouring of complaints about the constant squawking and defecating.

When the birds swarm over the area at this time of year, the cacophony can be deafening as the sky turns black with beating wings, like a scene from a horror movie.

As a result, Carson said she's worried the coal-coloured birds are being poisoned.

"I do understand the frustration," she said. "If you walk in the Brighton Road area -- especially when they are roosting -- I don't think there is a clean spot on the sidewalk."

Though poison is a theory, Carson was quick to note that it appears no other animals in the area have been affected.

She said it's heartbreaking to see the sickly birds in the park.

"They're very lethargic. If they do try to get away from you, they try to hop," she said. "They might fly a couple of feet in the air, but then they're down on the ground and very docile. Even when you're holding them, they're not really fighting."

Local residents are being warned not to handle any dead birds or approach any that appear ill. The City of Charlottetown is responsible for disposing of the dead birds, while the college is taking in ill animals for treatment.

Two years ago, bird lovers in the city were outraged when somebody shot three crows with a pellet gun during a five-week span. The shootings prompted a "rally for caws," with about 15 people marching to demand the birds be left alone.

At one point, the city's website recognized that residents had developed a "love-hate relationship" with their avian neighbours, which have been calling the park home for more than 100 years.

In 2006, the city decided complaints about the noise and the droppings had reached a point where action had to be taken.

"They're filthy, dirty, rotten things," one resident said at the time. "You get up in the morning and the sidewalks are white. The cars are white. I don't sit in the backyard anymore." After calling for proposals, the city spent $15,000 on noisemakers to scare the birds away.

Since then, the city has decided to live with the birds, but the complaints keep coming.

This report by The Canadian Press was first published Jan. 18, 2022.

War wounds: Limbs lost and lives devastated in an instant in Ukraine

There is a cost to war — to the countries that wage it, to the soldiers who fight it, to the civilians who endure it. For nations, territory is gained and lost, and sometimes regained and lost again. But some losses are permanent. Lives lost can never be regained. Nor can limbs. And so it is in Ukraine.

Ukrainian fighters extracted from the last bastion of resistance in Mariupol were taken to a former penal colony in enemy-controlled territory, and a top military official hoped they could be exchanged for Russian prisoners of war. But a Moscow lawmaker said they should be brought to 'justice.'

Former Pentagon officials have briefed at least three Canadian members of Parliament about unidentified flying objects, according to a Manitoba MP and a Texas-based researcher.

Conservative Party leadership candidate Pierre Poilievre has a personal financial interest in cryptocurrencies that he has promoted during his campaign as a hedge against inflation.

Alberta Premier Jason Kenney is urging the U.S. government to convince Michigan to abandon its legal campaign against the Line 5 pipeline.

Prince Charles and Camilla, the Duchess of Cornwall, have arrived in St. John's, N.L., to begin a three-day Canadian tour that includes stops in Ottawa and the Northwest Territories.