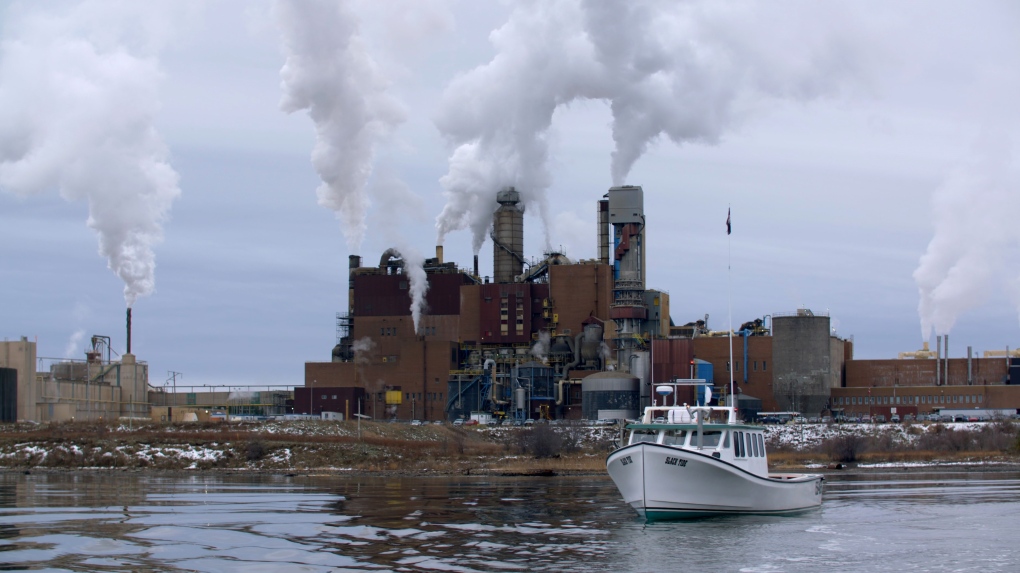 A boat and the Northern Pulp mill in Nova Scotia are shown in a still from the documentary "The Mill." (THE CANADIAN PRESS/HO)

HALIFAX -- Northern Pulp is focusing on cleaning equipment at its mill in Nova Scotia's Pictou County, as operations wind down in preparation for an indefinite shutdown by Jan. 31.

Paper Excellence Canada, the mill's parent company, said it is discussing the mill's "hibernation plan" with the government, after reversing its position this week and declaring its commitment to stay in the province for the long term.

Last month, the province's environment minister rejected the company's latest attempt to get approval for a plan to pump treated wastewater into the Northumberland Strait.

A Sunday statement from Paper Excellence said operations began to wind down on Saturday. It said by next week, only the facility's wood waste boiler will be operating to provide heat while equipment is cleaned.

The company said the operation will involve removing chemicals, pulp and wood fibre from storage tanks, piping and yards.

Premier Stephen McNeil said last month that the company would have to comply with the legislated Jan. 31 deadline to close its effluent facility in Boat Harbour, N.S., near the Pictou Landing First Nation.

Following the decision, Paper Excellence initially warned it would permanently wrap up operations at the mill without a place to dump its effluent, but statements this week suggested a change in the company's stance.

"We still believe that a prosperous forestry, economy and healthy environment can co-exist in Pictou County, just like it does in 89 other communities with pulp and paper mills across Canada," Sunday's statement read.

The company said it doesn't know how long the closure will last but reiterated Sunday that it intends to continue with the province's environmental assessment process.

It also voiced support for the more than 300 workers at the mill affected by the looming closure.

"Our team is also focused on supporting our employees and their families as the reality of lost jobs and livelihoods becomes clearer with the hibernation," Paper Excellence's statement said.

In light of the company's decision to continue with an environmental assessment, the province has issued a draft terms of reference, which the company said it is reviewing.

The public has until Feb. 7 to comment on the draft and the company will be provided with final terms in April. After that, it will have up to two years to complete a report.

The premier said this week that the company's decision would not alter his government's plans for a $50-million job transition fund to assist the workers at the mill and more than 2,000 workers in the province's forestry sector.

The province has responsibility for the current discharge pipe that runs from the plant to Boat Harbour.

McNeil has said the province is in discussions with the Pictou Landing First Nation about allowing the remaining effluent to be dumped before the province cleans and caps the pipe.

This report by The Canadian Press was first published Jan. 12, 2020.