Nova Scotia commits to cleaning up the polluted LaHave River 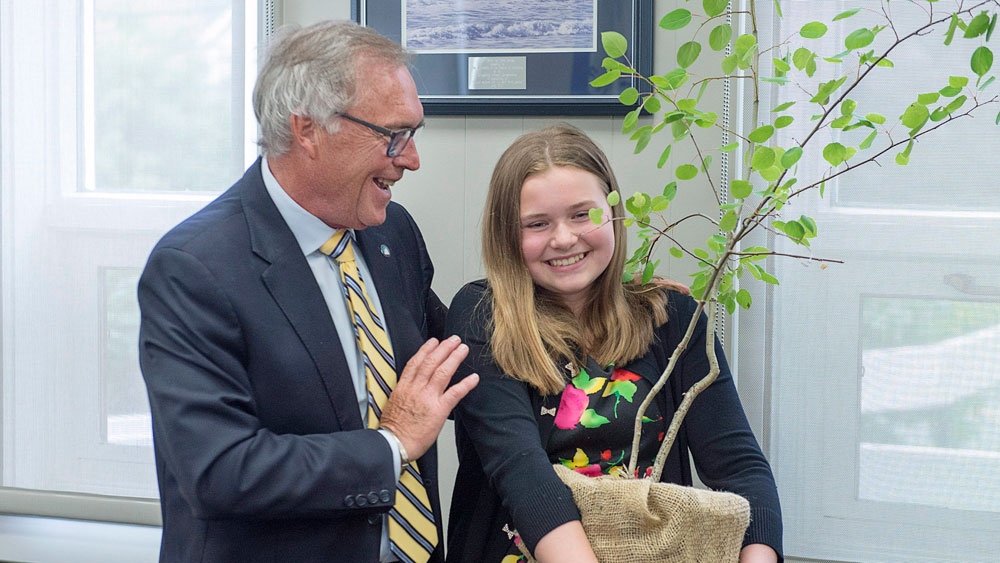 Stella Bowles, a 12-year-old enviromental crusader, receives an aspen tree from Don Downe, mayor of the Municipality of the District of Lunenburg, in Bridgewater, N.S. on Thursday, July 7, 2016. The Nova Scotia government has come up with a plan to stop 600 homes from dumping raw sewage into the LaHave River. The cleanup has been championed by Bowles, whose Facebook posts about her tests for fecal matter put pressure on local politicians to take action. (THE CANADIAN PRESS/Andrew Vaughan)

BRIDGEWATER, N.S. -- When 12-year-old Stella Bowles decided to test the waters of a scenic river near her Nova Scotia home last fall, she had no idea her elementary school project would be the catalyst for a government cleanup plan after years of neglect.

"I just thought it would be a little project to let people know what was going on and it's exploded from there," Bowles said Tuesday, following a signing ceremony between the Municipality of the District of Lunenburg and the Nova Scotia government.

"It's like it took a kid to actually bring awareness to a problem," said Bowles. "I think that's actually kind of cool."

Her posts soon went viral, drawing much-needed attention to the 600,000 litres of raw sewage a day that was being discharged illegally into the LaHave River from about 600 homes.

Following extensive media attention, municipal council voted last month to move ahead with an application for $17 million in funding under Infrastructure Canada's Building Canada Fund in order to replace the so-called straight pipes in the homes with septic systems.

Mayor Don Downe said Tuesday the decision to move ahead with the federal application was the result of years of hard work with local environmental groups and homeowners, but he was also quick to credit Bowles as the "face" of the initiative.

"She has allowed people to really understand what this is all about," Downe told a small gathering in the council chambers.

David Maxwell, a retired doctor who helped out as the young girl's science adviser, said he had been working with a small group that had been trying to publicize their own test results for years and had gotten "absolutely nowhere" with various levels of government.

"When a 12-year-old child came along and said the emperor has no clothes, they suddenly took an interest," Maxwell said.

He said Bowles was always clear the goal of her project was to highlight the problem.

"She wasn't going to dictate the solution. The solution had to come from the adults who had created the problem."

Under Tuesday's agreement, which is contingent on funding from Ottawa, the municipality will start identifying properties with straight pipes, which are illegal under the province's Environment Act.

Both levels of government are then expected to educate homeowners about the polluting pipes, with the municipality managing a program to replace them with septic systems by March 31, 2020.

Residents will be expected to repay costs not covered by grants over a seven-year period, while the provincial Environment Department will be responsible for inspections and enforcement.

Possible enforcement actions include warnings, directives, and the issuing of summary offence tickets -- $697.50 for the release of a substance and $812.50 for failure to comply with a directive.

Bowles said she's "excited and happy" over the recent developments, and hopes the federal funding materializes sooner rather than later.

"I just hope that the river is going to be clean and that I can swim in the river with my kids when I'm older," she said.