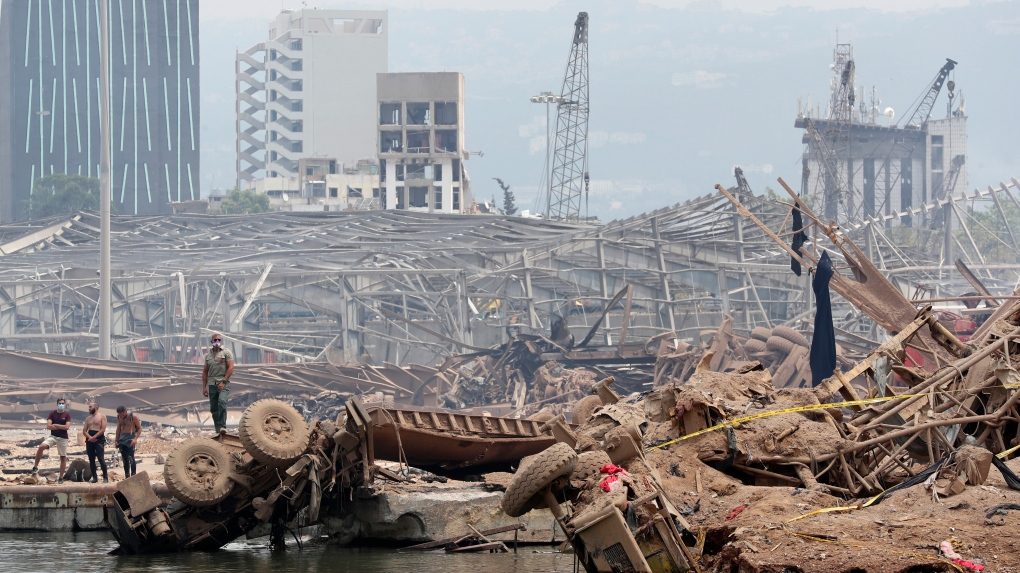 People are pictured at the devastated site of the explosion in the port of Beirut, Lebanon, Thursday Aug.6, 2020. (AP Photo/Thibault Camus, Pool)

"We are all seeing the devastating impact of the tragedy in Beirut," said Premier Stephen McNeil in a news release issued Friday.

"The Lebanese community has deep roots in Nova Scotia. Our hearts go out to Lebanese-Nova Scotians, their families and loved ones and all those affected by the explosion. We stand with you and are keeping you in our thoughts,” added McNeil.

In Nova Scotia, the Lebanese community has deep roots, dating back to the arrivals of the first immigrants from the country in the mid-1880s. The majority of people in the community today still have family and friends in Lebanon.

United Nations agencies have warned of a humanitarian crisis in Lebanon following the devastating explosion at a portside warehouse on August 4.

Officials say the explosion was caused by a fire that set off more than 2,750 tons of explosive ammonium nitrate at a warehouse in Beirut's port. The blast killed at least 135 people and wounded about 5,000 others, according to Lebanon's health minister.

Canada's federal government is contributing up to $5 million in humanitarian aid, including $1.5 million to the Lebanese Red Cross to provide emergency medical services, shelter and food

The Lebanese Red Cross Society's mission is to provide relief to victims of natural and human disasters and it helps people prevent, prepare for and respond to emergencies, and to reduce the suffering of the most vulnerable.

Donations can be made through the Canadian Red Cross to the Lebanon Humanitarian Needs Appeal.