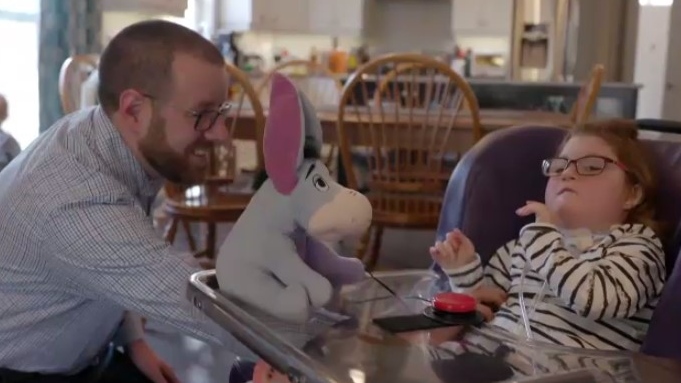 Katherine Simpson, 11, was born with a rare medical condition called an unbalanced translocation.

The Simpson family from Upper Sackville, N.S. appears to be similar to many other Maritime families. Their 11-year-old daughter Katherine is in the sixth grade.

"She really loves being at school," said her father Pete Simpson, who along with his wife Lisa, also has 4-year-old son Jack to keep them busy.

However, inside the Simpson home, things are far from routine. Katherine relies on her family for her care and daily living.

Katherine was born with a rare medical condition called an unbalanced translocation. She spent 10 of her first 12 months in hospital at the IWK Health Centre.

"She's nonverbal and she's non-mobile," said Simpson. "She's in a wheelchair and she's on oxygen."

"She has had a tracheostomy and she's on a ventilator at night," said Simpson.

The Simpsons are now awaiting Katherine's second dose of the COVID-19 vaccine, which has brought added concerns.

"Having to wait eight weeks between doses and she had her first dose Dec. 9," said Simpson. "That means we have to wait until Feb. 3 to get her second dose."

Both parents are now working from home and the kids are not attending school. Simpson said exposing Katherine to the Omicron variant, before she get her second vaccination shot, is a life or death gamble.

"It really could be one bad illness that takes her from us," said Simpson.

The family wants the Nova Scotia Department of Health and Wellness to allow an exception, and give Katherine her second shot sooner.

"We don't really have a good access to advocate to public health directly," said Simpson.

"There are very few exceptions given to this interval. We will look into whether their daughter is eligible for an earlier vaccination," said public health in an email to CTV News.

Monkeypox cases near 200 in more than 20 countries: WHO

The World Health Organization says nearly 200 cases of monkeypox have been reported in more than 20 countries not usually known to have outbreaks of the unusual disease, but described the epidemic as 'containable' and proposed creating a stockpile to equitably share the limited vaccines and drugs available worldwide.

Former Canadian gymnast Abby Pearson Spadafora said on Thursday she had suffered years of abuse at the hands of Olympic coach Dave Brubaker and his wife Elizabeth and called for an independent investigation of the sport.

Four decades after the Swedish pop supergroup last performed live, audiences can once again see ABBA onstage in an innovative digital concert where past and future collide.

The National Rifle Association begins its annual convention in Houston on Friday, and leaders of the powerful gun-rights lobbying group are gearing up to "reflect on" -- and deflect any blame for -- the deadly shooting earlier this week of 19 children and two teachers at an elementary school in Uvalde, Texas.

Twitter shareholders have filed a lawsuit accusing Elon Musk of engaged in 'unlawful conduct' aimed at sowing doubt about his bid to buy the social media company.