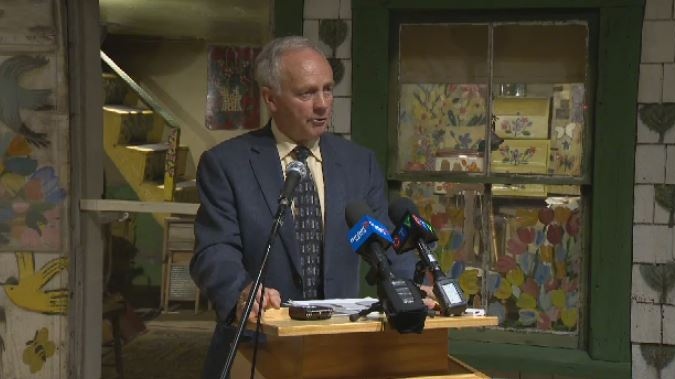 Leo Glavine, Nova Scotia's minister of Communities, Culture and Heritage, makes an announcement at the Art Gallery of Nova Scotia in Halifax on May 9, 2018.

HALIFAX -- Nova Scotia is launching a trade mission to sell its culture to Asian markets, but it's about much more than lobsters, bagpipes and donairs.

Leo Glavine, the provincial cabinet minister who will lead a seven-day mission that begins Thursday, said there is growing interest in Asian markets in theatre, music and art -- something that fits in with the province's push to grow its cultural sector.

"These are universal themes where language is not a major barrier," said Glavine, the minister of Communities, Culture and Heritage. "We want to build on the success we've had and open up these other creative industry opportunities."

A renowned Nova Scotia theatre company says its own experience in Asia is proof the province's cultural exports can succeed if companies are committed to putting in the work.

Windsor-based Mermaid Theatre of Nova Scotia has prospered in China for the past five years -- to the point where it currently generates 25 per cent of its earned revenues in the world's most populous nation and recently signed an agreement expanding its theatre tours there.

"We had no idea what the reception would be like," Mermaid's managing artistic director Jim Morrow said of his company's initial foray.

Morrow said it took extensive research and work to help build the much-needed theatre infrastructure before Mermaid could even gain a foothold.

Once it did, Morrow said his theatre company, which specializes in stage adaptations of children's literary classics using puppetry, was able to capitalize on opportunities presented by a growing middle class.

"One of those opportunities is access to theatre and plays and the arts, which is something relatively new in China," he said. "It's based more on a western model, but it's something they are adopting."

Glavine and a cultural business delegation will meet with Chinese and Japanese government officials, cultural organizations, and business leaders over the course of the trade mission.

The province says its culture sector was valued at $874 million in 2016 and supported almost 14,000 jobs, and Glavine said the goal of the mission is to build on growing trade in other sectors such as seafood and agriculture.

Glavine said it's hoped a two-way exchange can eventually occur, saying there is interest in cultural aspects that are unique to the province such as the works of folk artist Maude Lewis, and original artifacts from the sinking of the Titanic and the 1917 Halifax Explosion at the Maritime Museum of the Atlantic.

He said there is also a growing awareness of educational institutions such as the Nova Scotia College of Art and Design.

Fred Bergman, a senior policy analyst with the Atlantic Provinces Economic Council, said a trade mission fits in with the overall goals of Nova Scotia's cultural action plan which links promotion of the arts with areas such as provincial tourism.

While Nova Scotia is largely noted for its historic links to Scotland, the action plan released in 2017 places a heavy emphasis on promoting Aboriginal culture and bolstering the province's "diverse communities."

"There is a broad sweep of cultural opportunities for people from other cultures to experience," said Bergman. "So what they would really come for is to see something unique, something they might not see in their home country."

Morrow said the province's push into China and other Asian markets is timely and has the potential to produce more success stories in the future.

"It's actually proven to be a great experience and lucrative for us, so I hope it is the same for everyone else," he said.