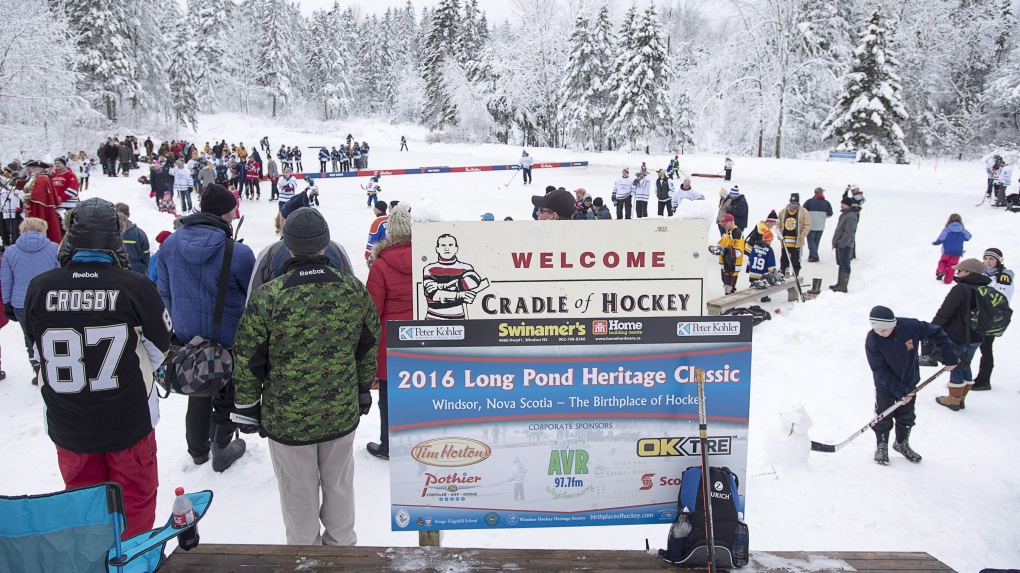 WINDSOR, N.S. -- For hockey fans across Canada, the water in Nova Scotia's Long Pond is sacred -- especially when it's frozen.

The small body of water in the picturesque Annapolis Valley is billed as the "cradle of hockey" because there's evidence to suggest the game has been played there since the early 1800s.

The 10-hectare rural property on the east side of Windsor, N.S., that includes the pond is now up for sale, with an asking price of $1.38 million.

"It's been a difficult decision for the family, but it's been on our minds for quite some time," said Danny Dill, who owns the pond and the surrounding land with his brother Andrew.

The Dill brothers also operate the nearby farm that is famous for its giant pumpkins. A 45-minute drive north Halifax, the farm is also tourist draw.

"We're known for the pumpkins and the farm operations, and that, at the end of the day, pays the bills," Dill said in an interview Wednesday, noting there is no admission fee for those visiting Long Pond.

"But farming has been pretty rough the past couple of years with the weather and so forth. It's a lot to take on. It's like two big tourist destinations."

In 2015, Sports Illustrated named Long Pond one of the seven "hockey wonders of the world," saying it was recognized as a place where the game of hurley evolved into the modern game of hockey.

Dill said the family wants to see the site developed into a larger tourist attraction, similar to the National Baseball Hall of Fame and Museum in Cooperstown, N.Y.

"I don't have the time or the resources to do it and make it great," he said, adding that his children -- now in university -- are unlikely to take over the farm.

The Dill brothers are the sons of the late Howard Dill, who became famous for his gargantuan gourds -- and his promotion of Long Pond as a hockey icon.

The senior Dill, who died in 2008, started gathering hockey memorabilia in the 1940s. Among the family's artifacts are century-old pucks found at the bottom of the pond.

Today, a small museum on the farm displays a portion of what has become one of Canada's largest private collections of hockey relics, souvenirs and records.

The sale of the property includes the merchandising rights for the name Long Pond, as well as access to the artifacts -- though the Dill family will retain ownership.

Danny Dill said he's sure his father would have approved the sale, given the fact he had earlier subdivided the farm and surveyed a road that would lead to the pond without cutting through the barnyard.

"He would probably give me his blessing and say, 'It's about time,"' Danny Dill said.

He bristled at he notion that the birthplace of hockey remains a subject of debate, with competing claims made by proponents in Montreal, Kingston, Ont., and Halifax.

In 2002, the Society for International Hockey Research published a study that rejected Windsor's claim, saying Montreal appeared to have a stronger case, based on an game played at the Victoria Skating Club on March 3, 1875.

Stick-and-ball games on ice in Nova Scotia in the 1820s and at Kingston in the 1840s were pastimes and didn't constitute hockey, the group said.

When the study was released, Howard Dill dismissed its findings.

"It's just five guys from Upper Canada being biased," he told The Canadian Press in 2002.

His son Danny had one word for the Montreal claim: "Baloney."