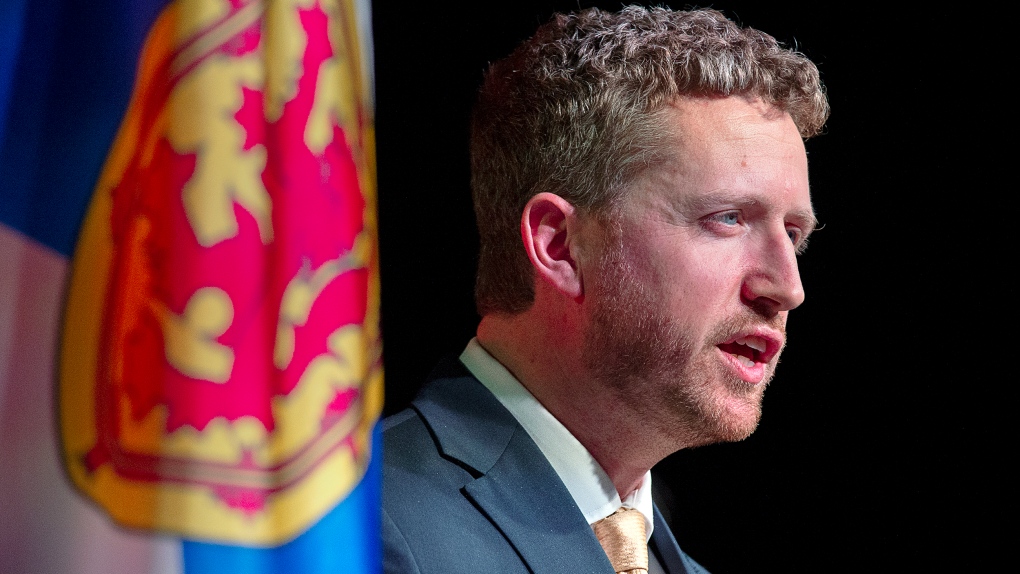 Iain Rankin addresses supporters after winning the leadership of the Nova Scotia Liberal party at a virtual convention in Halifax on Saturday, Feb. 6, 2021. (THE CANADIAN PRESS / Andrew Vaughan-POOL)

HALIFAX -- Changes that would eliminate more than half of a 20-page bill aimed at protecting Nova Scotia's biodiversity are being defended by Premier Iain Rankin.

Proposed changes to the Biodiversity Act, tabled Monday before the legislature's law amendments committee remove whole sections dealing with enforcement and emergency orders and also change the scope of the bill, limiting its provisions to Crown land.

During a virtual news event with reporters, Rankin said the bill is being revamped because private landowners, who control about 70 per cent of the province's lands, weren't comfortable with the legislation.

Rankin rejected claims that the bill had been weakened to satisfy landowners, saying the changes are about building trust.

"We are removing the uncertainty of how enforcement could be used," he said. The government's priority is getting the legislation passed, he said, adding that it will be reviewed within five years.

When it was introduced two weeks ago, the bill initially allowed for enforcement measures on private lands in order to protect endangered plants and animals, combat invasive species and preserve at-risk ecosystems.

Rankin said he believes most private owners will work with the government voluntarily to implement biodiversity management zones on their land as called for in the revamped legislation.

"I do believe that most of them want to do their best to protect the environment," he said.

The premier also rejected accusations that his government is knuckling under to pressure from the forestry industry, saying the changes reflect what he and his caucus have heard from individual constituents. He called the bill as now proposed a "good start" in protecting the province's ecology.

Jeff Bishop, of industry group Forest Nova Scotia, told the committee the law as initially proposed gave the government enforcement powers that were too broad.

"The intent of the powers may well have been for activities like controlling invasive species, but the sections are so broad and undefined that it could also be used to stop almost any activity anywhere," Bishop said.

He said his group appreciates that there is now more clarity and that adhering to the Biodiversity Act provisions will be a voluntary process for landowners.

"Contrary to the opinion of some who seem overly concerned that Nova Scotia landowners spoke out on this bill, this is what the democratic process looks like," he said.

But Karen McKendry, of the Halifax-based Ecology Action Centre, said the campaign to essentially stop the legislation was "gut-wrenching."

"It wasn't our dream act, but government proposed many elements that showed promise to address the threats to biodiversity," McKendry said.

She said removing useful elements such as enforcement capabilities will take away one of the government's few powers to ensure rules are respected.

The law amendments committee was scheduled to hear from 45 presenters on Monday, a process that was expected to go into the early evening.

This report by The Canadian Press was first published March, 29, 2021.