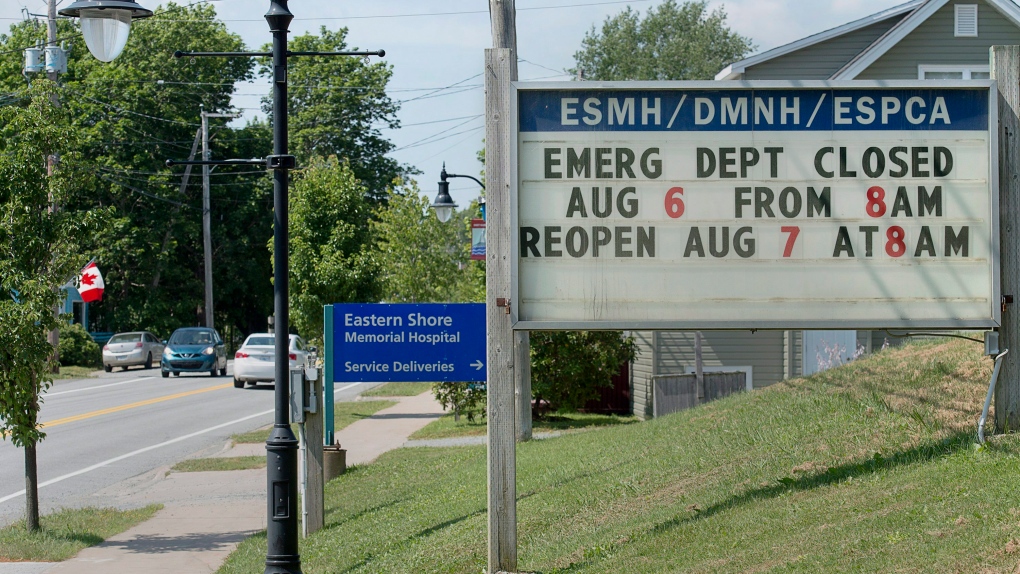 Residents are informed of the status of emergency room care at Eastern Shore Memorial Hospital in Sheet Harbour, N.S. on Monday, Aug. 6, 2018. (THE CANADIAN PRESS/Andrew Vaughan)

HALIFAX -- Nova Scotia hospitals' emergency departments were only open a total of 96 per cent of the time in fiscal 2017-18, continuing a negative trend seen in recent years.

The Health Department said Thursday most closures were in smaller, rural areas, and about half the province's 38 ERs weren't affected at all.

In total, emergency rooms were closed a total of 30,493.5 hours, while the report says there are 312,763 scheduled open hours annually for the province's emergency departments.

Temporary closures were most acute in the northern part of the province, with 5,882 hours of closures, and the zone covering the eastern mainland and all of Cape Breton, which registered 4,238 closure hours.

Other hospital ERs with notable rates of closure included All Saints Springhill Hospital with 1,530 hours and the Strait Richmond Hospital with 828 hours. The Roseway Hospital in Shelburne saw 789 hours of closure.

The central province, including the Halifax area, had the lowest number of overall emergency department closures with 691 hours.

The report says the closure hours at Musquodoboit Valley Memorial were intentional for "balance in physician scheduling between primary and emergency care," while there were eight closures at Eastern Shore Memorial in May and July due to "an unexpected decrease in physician resources."