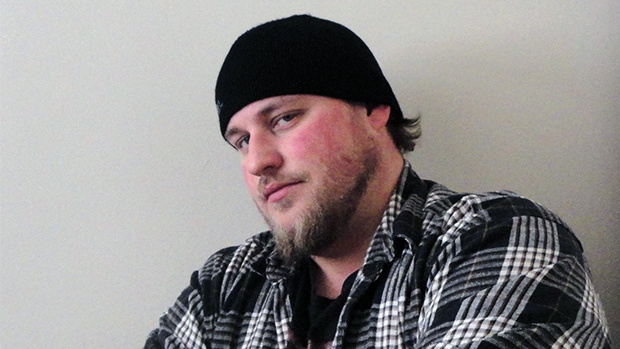 “Becky was the second script I ever wrote. My first script was quite a bit bigger in scope and would have cost a lot of money to make, but it got me some attention and representation in LA and some festivals,” says Morris.

“It was clear that a movie that was going to cost that kind of money wasn’t going to get produced, so I decided to try my hand at writing something a little smaller, with a smaller budget, and that’s how ‘Becky’ came about.”

The 41-year-old says his fascination with film developed when he was a child living in Streets Ridge, N.S.

“I grew up with no cable in the country and grew up with a VHS player and that was a game-changer for me,” says Morris.

“As a kid I was a big ‘Star Wars’ fan and anything science fiction. I was also always kind of drawn to the horror section of the video store and as I got older that became my passion.”

Morris’ love of storytelling led him to take the Radio and Television Arts program at the Nova Scotia Community College in Kentville, N.S., graduating in 2000.

“It wasn’t really until several years after I graduated, I had been writing stories in my head for several years, that I taught myself how to properly format a screenplay and decided to try and get some of those stories down,” says Morris.

Morris’ break came when he met his now-manager on Twitter and she saw a post promoting his first script.

“She asked to read it and as soon as she read it she offered to represent me going forward,” says Morris.

Then, in the summer of 2017, Morris sold the script for “Becky” to a producer in Los Angeles.

“I was driving to Montreal at the time when I got the call from him and pulled over and was over-the-moon excited,” recalls Morris.

“It’s taken since then, about three years from the time I sold script, to the time the movie is set to be released. It was a long process, with a lot of emotional ups and downs. I was always concerned something would happen, that it would fall through, but when you get enough people on board that are passionate about the project and believe in it, you just watch it take shape gradually over time.”

The plot of “Becky” can be described as “Home Alone” meets “Die Hard” meets “The Last House On The Left,” according to Morris.

“It centres around a 13-year-old girl (Becky) who is visiting a lake house with her father, following the passing of her mother. The dad, played by Joel McHale, is hoping to reconnect. (Things go awry) when a group of escaped convicts come looking for an artifact and Becky is in possession of it. She has to save her family and take revenge against the bad guys,” explains Morris.

Morris says actress LuLu Wilson, who starred in films like “Annabelle: Creation” and “Ouija: Origin of Evil,” was drawn to the role of Becky -- a strong female lead.

“Producers approached her very early on and she was excited and agreed to sign on not long after I sold the script,” says Morris.

While Wilson seemed like a natural fit, a more unlikely casting choice was slotting comedic actor Kevin James in the role of bad guy Dominick.

“Needless to say, when I was writing the script, Kevin James is not who I had in mind to play the main villain. His performance is just mind-blowing. I think everyone on set was blown away by it,” says Morris.

Thanks to his early success, Morris says he’s focused on continuing to pursue a path in the film industry. He has a second script in development called “The Evil Eye” and is happy to be able to follow his dreams from his home in Nova Scotia.

“It’s funny, anyone would tell you that in order to find success in the movie industry you have to be in LA, you have to be there to take meetings and pound the pavement. So far, I’ve had pretty good luck doing it from Nova Scotia. This is my home and I’m going to try and stay here and continue doing it from here as long as possible,” says Morris.

For those looking to follow in his footsteps, Morris suggests reading every script you can get your hands on.

“Once you’ve completed something, get it out there in front of as many people as you can, get feedback, learn to take criticism, use the tools you have at your disposal to your advantage, like social media, and to make connections,” says Morris.

“Becky” was scheduled to debut at the Tribeca Film Festival in New York last month, however, the event was cancelled due to the COVID-19 pandemic.

“That was a disappointment. I was looking forward to a big splashy opening, followed by a theatrical release this summer,” says Morris.

“Becky” is now scheduled to be released on demand June 5 and Morris says his family is eager to see it.

The film includes some gruesome moments and the storyline is dark, so it may not be for everyone, warns Morris. However, if you’re a horror fan, he says “Becky” is pure pulp fun.

Movie trailer may not be appropriate for all audiences