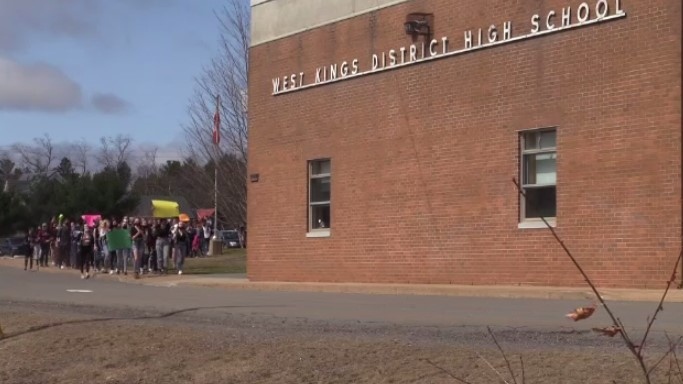 Kenzie Thornhill, 17, was handed a five-day suspension earlier this week. According to her, the incident happened one week ago, when she posted a picture to social media.

AUBURN, N.S. -- A Nova Scotia high school student says she's back in class after being suspended for bringing attention to someone wearing a shirt that she found offensive.

In an interview Sunday, Kenzie Thornhill said she returned to West Kings District High School in Auburn, N.S., on Friday, following a conversation with the school's principal who told her the local school board had reversed its decision.

The 17-year-old Grade 12 student says she was suspended last week after posting a photo online of someone wearing a shirt with lyrics on the back that mimicked the style of "Deck the Halls," with one line reading: "'tis the season to be rapey."

"Knowing people that are (sexual assault) victims, and not liking that at all, I did what pretty much any teen would do with social media and I posted it," said Thornhill.

Thornhill said she had also shown the photo to a teacher and hall monitor and was told the issue would be handled.

But although the photo only showed the shirt and not the student, said Thornhill, the school board suspended her for five days for violating school rules. She said they told her posting the photo on social media was a form of cyberbullying.

"I was being punished for posting this photo, but the kid who did wear the shirt, however, was just told not to wear the shirt again," she said.

Annapolis Valley Regional Centre for Education executive director Dave Jones would not discuss specific details citing privacy. In an emailed statement sent Friday, he said, "the school has revisited the decisions made in recent days related to discipline."

Jones also said it was an opportunity to engage with students and to help them feel "safe and supported" and to feel they can report any incident within their school or its community.

"Any language that promotes sexual violence is never acceptable or tolerated at our schools, and it was not acceptable in this instance," he said.

Thornhill said she wasn't given a specific reason why her suspension was revoked and she's asked her principal to seek an apology from school board officials.

"To be made public if that would be OK, but if they can't then just to me would be fine," she said.