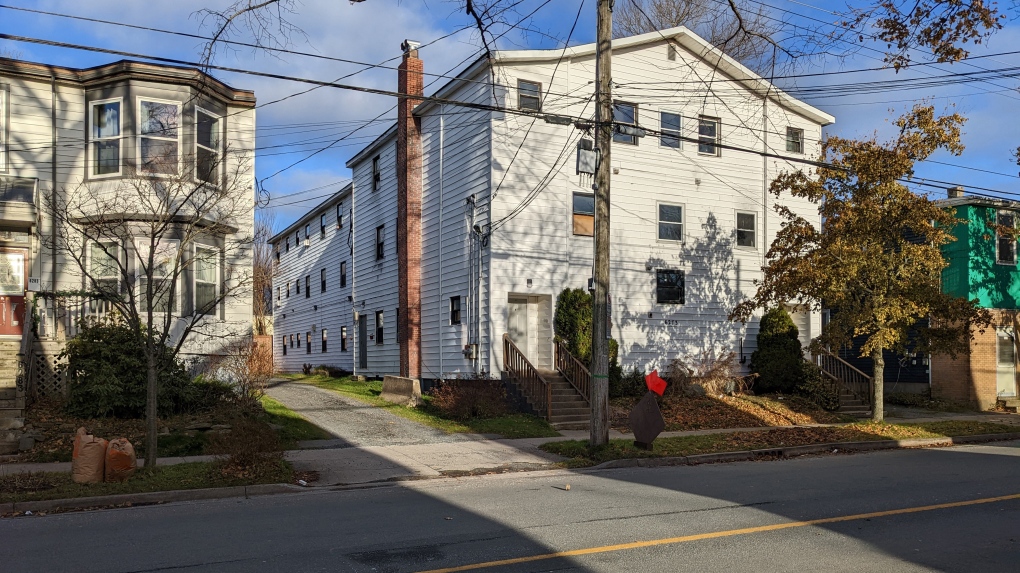 The Nova Scotia government has hired a consultant to examine the feasibility of an Ontario-style enforcement system for landlords and tenants, where trained officers could advise parties and issue fines for abusing the law. The Dalhousie Legal Aid Clinic says situations such as the temporary removal of a stove from a rooming house, white building on the right as shown in this handout image, in Halifax, are the kind of cases where such a reform could assist. THE CANADIAN PRESS/HO-Dalhousie Legal Aid Clinic
HALIFAX -

The Nova Scotia government has hired a consultant to examine whether the province should create an Ontario-style enforcement system for landlords and tenants, in which trained officers would advise parties on disputes and have the power to lay charges.

Halifax-based Davis Pier Consulting won the contract to study Ontario's system and come up with a comprehensive program design detailing the scope, structure and costs of implementing something similar in Nova Scotia, said Blaise Theriault, spokesman for the minister responsible for the Residential Tenancies Act.

Both tenants rights groups and landlord associations have been for years calling for an enforcement system. They say the province doesn't have the resources to manage tenant-landlord disputes, which can drag on for months.

"Some stakeholders feel that there are no consequences for repeated or egregious violations of the Residential Tenancies Act, and (its) directors' orders can be difficult or impossible to enforce," says the province's overview of the project, dated Oct. 12.

The overview says the consultant will analyze Ontario's system, in which specialized officers investigate issues such as reports of tenants being forced out of their apartments, or the illegal retention of security deposits. The program's primary goal would be to enforce Nova Scotia's Residential Tenancies Act.

The government says that in cases where a tenant or landlord -- despite warnings -- continues to violate the act, an officer would have the power to issue a charge against them.

Theriault said in an email on Tuesday that the consultant's report is expected by late February, and "this will help guide any further work on residential tenancies compliance and enforcement and shape what the division may be responsible for enforcing."

Joanne Hussey, a community legal worker with Dalhousie Legal Aid Service, said in an interview Monday that she's encouraged by the government's decision to hire a consultant. But she says it's important that the proposed enforcement unit recognizes the power imbalance between tenants and landlords.

As well, she said the findings of the hearings should be publicly available, contain legal reasoning, and not require multiple tenants to pursue the same grievance against a landlord.

"It shouldn't be up to each individual to bring a case and make it stick," she said.

Hussey issued a release on Monday saying the clinic is representing a rooming house tenant who lost the use of a communal stove for over a week. The tenant, Hussey said, should receive a portion of his rent back, adding that his case is the latest to show an enforcement and compliance unit is needed.

"You're talking about people who don't have the means that some of us have to make other arrangements to cook and prepare their food," she said.

Kevin Russell, director of the Investment Property Owners Association of Nova Scotia, said landlords are also in favour of an enforcement and compliance program that would help quickly resolve disputes.

"We know in a lot of instances, one of the parties don't even know there's a problem and there's a definite lack of communication at times between the landlords and tenants and sometimes vice versa," Russell said.

"We would hope a compliance and enforcement division and program would quickly resolve situations where one party or the other feels aggrieved by the actions of the other."

"Sometimes, it's just a matter of having an officer there to mediate the situation and to advise the offside party that they are offside, and the action has to stop," he added.

This report by The Canadian Press was first published Nov. 29, 2022.