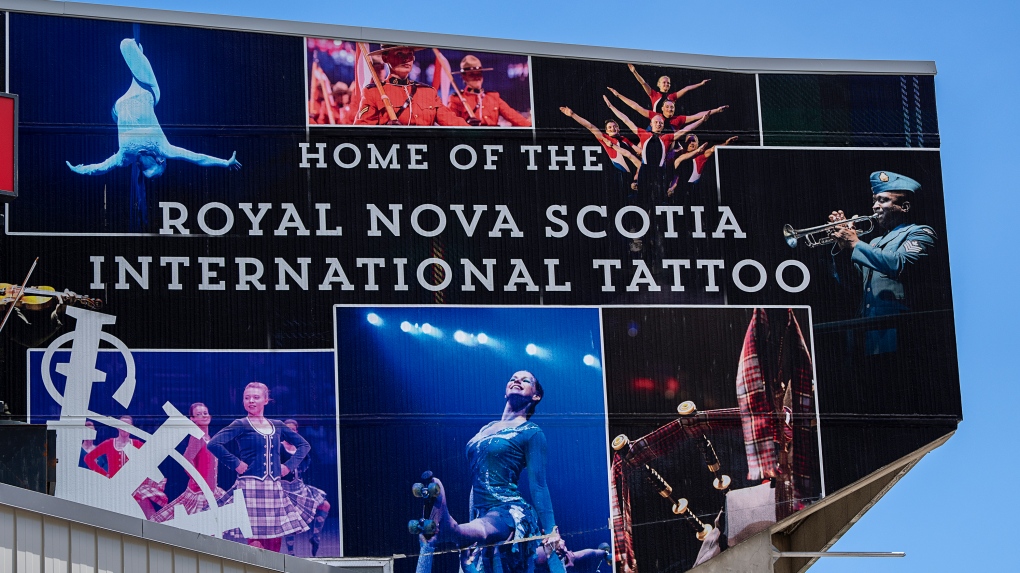 A sign advertising the Royal Nova Scotia International Tattoo, is seen on the Scotiabank Centre in Halifax on Thursday, June 30, 2022. The Tattoo is ending a partnership with a group providing tickets to veterans following complaints that the group was using a controversial Thin Blue Line image. (THE CANADIAN PRESS/Andrew Vaughan)
HALIFAX -

The Royal Nova Scotia International Tattoo is ending a partnership with a group providing tickets to veterans following complaints that the group was using a controversial Thin Blue Line image.

The Thin Blue Line symbol -- a blue line across the Maple Leaf -- is considered a sign of police solidarity but has also been criticized as a symbol of white supremacy.

Officials with the Tattoo, an annual show of military music and other performers in Halifax, said on Twitter Wednesday they cut ties with VALOUR Maritime Society, thanking people for bringing the matter to their attention. When contacted, a spokesperson for the Tattoo declined further comment until the annual shows conclude on Saturday.

VALOUR is a non-profit group that raises money to help veterans and first responders get treatment for post-traumatic stress disorder. It was incorporated last November.

Group president Graham Walsh said he was told by email that the Tattoo received complaints the VALOUR logo includes a Thin Blue Line symbol, but he rejected those claims, adding that the line across the Maple Leaf in the logo isn't blue -- it's teal.

"I responded back to the Tattoo and I expressed frustration, and I was disheartened that they would send me that email without actually talking to me about the allegations that have been made through social media," Walsh said in an interview Thursday.

"Our Canadian flag that we utilize in our logo uses a teal line," he said. "Teal is the international ribbon colour for PTSD awareness."

Walsh said Tattoo officials initially apologized for the confusion, but then later called him to say they were continuing to face a backlash and were ending the partnership.

"It's very unfortunate," Walsh said. "As a society we are very hurt that the Tattoo has dropped us because of false allegations. I really hope it doesn't hurt the society itself in the coming weeks."

Walsh admitted, however, that his group uses the hashtag .ThinBlueLine in some of its posts on Facebook.

"We use a lot of different hashtags," Walsh said. "Maybe that's something we need to discuss with our board of directors."

El Jones, a professor of political and Canadian studies at Mount St. Vincent University, says she's not surprised the Tattoo was quick to end the partnership.

"The symbol of the Thin Blue Line is not a neutral symbol," she said in an interview Thursday. "This isn't just a symbol of policing. It's very tied to the Blue Lives Matter movement, which is a movement excusing and defending police to commit violence against Black people."

Jones said in the last few years, the Tattoo has made an effort to be more inclusive with diversity shows, such as Black choirs. The use of a symbol or hashtag of Thin Blue Line, she added, is bad public relations for the Tattoo.

But she said organizers of the Tattoo should consider the broader issues around celebrating security forces.

This report by The Canadian Press was first published June 30, 2022.