November ends on a stormy note in Cape Breton 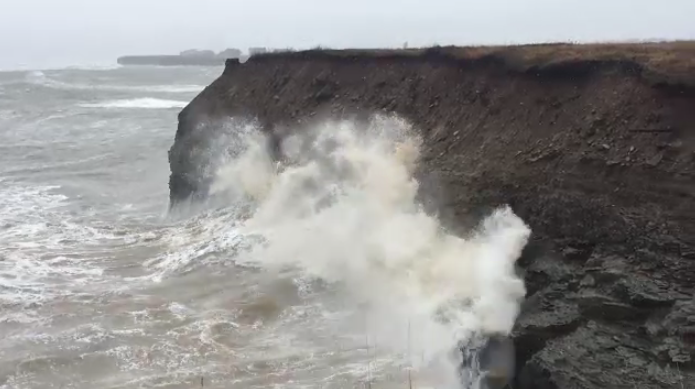 A few kilometres down the road, Dominion Beach was taking a battering. The spectacular show of waves colliding with the beach’s huge rocks attracted dozens of people wanting to catch a glimpse of Mother Nature's wrath.

HALIFAX -- On Saturday, November made a dramatic exit in some parts of Cape Breton. While spectators in some areas flocked to the coast to view the storm surge battering seaside cliffs, snow led to a scary situation on the Trans Canada Highway involving a bus of teenage hockey players.

The ocean was angry alongside the coast of Glace Bay, N.S., on Saturday. With waves exploding off the cliffs, November wrapped up in a tumultuous fashion – complete with a wicked mix of wind, snow and rain.

"When they're breaking over the top of the old wharf, at Table Head – they're big," said resident, Hector Morrison.

A few kilometres down the road, Dominion Beach was taking a battering. The spectacular show of waves colliding with the beach’s huge rocks attracted dozens of people wanting to catch a glimpse of Mother Nature's wrath.

However, further down the road, there was significant damage with a section of a boardwalk leading to the beach being partially submerged – which some say is a growing problem.

"Every storm now, it's getting worse and worse,” says resident, Murdock Sampson. “If you go over by the old schoolhouse, you can see the bridge washing out and everything."

And the weather troubles didn’t stop there. Across the Canso Causeway in Cape Breton, a bus carrying a team of 19 Major Bantam hockey players from Annapolis Valley slid off Highway 105 in Queensville.

Fortunately, RCMP reported everyone on board was unharmed, except for one player who suffered a broken arm and was taken to hospital with non-life threatening injuries.

Power crews were kept busy with over 6,000 Nova Scotia Power customers off the grid at around mid-afternoon. In addition, Marine Atlantic cancelled crossings to and from Newfoundland.

Meanwhile, back along the ocean in Cape Breton, the sheer power of the storm surge left many marvelling at the magnificence of the natural phenomenon.

"You never see this on Lake Ontario – I can tell you,” said spectator, John Howley. “The waves are just a little bigger."