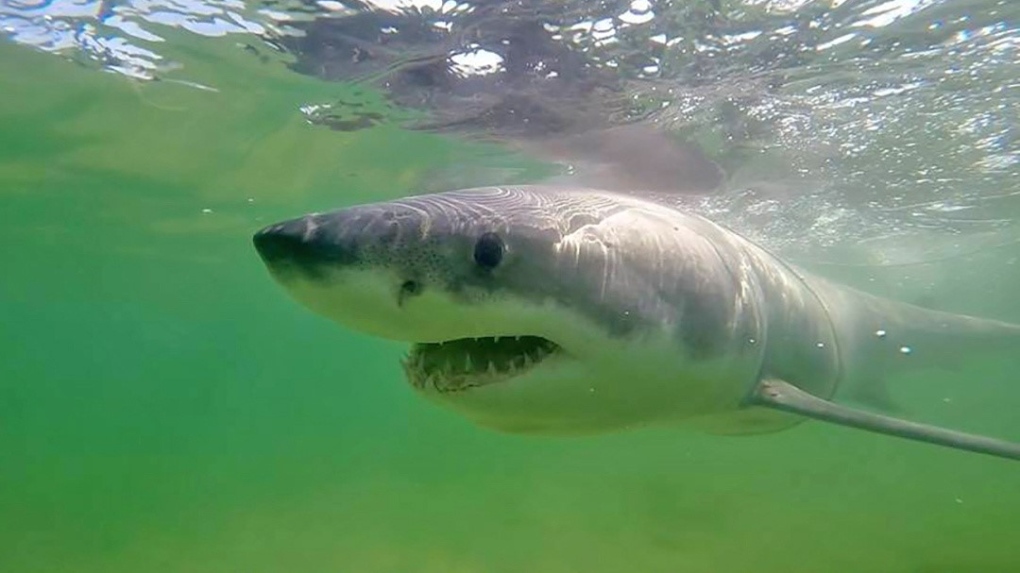 A great white shark known as "Jamison" is shown in a handout photo. It was among those tagged in a colony of sharks down off Cape Cod who show a tendency over past five years to make journeys into Canadian waters. (THE CANADIAN PRESS/HO-Massachusetts Shark Research Program / Atlantic White Shark Conservancy)

But the "fascinating" creatures are themselves being closely watched by international teams of scientists who are attempting to document their apparent renaissance in the northwest Atlantic.

"We are seeing signs the conservation measures we're taking are giving the animals a chance and enabling a comeback," says Frederick Whoriskey, a marine biologist and ecologist at Dalhousie University.

"But we don't have the numbers (of their abundance) yet."

At her lab in Halifax's Bedford Institute of Oceanography, Heather Bowlby, research lead at the federal Canadian Atlantic Shark Research Laboratory, is attempting to remedy that.

She's preparing an expedition for early August to build on the scant knowledge of these elusive creatures' lives in Atlantic Canadian waters.

Her three-person team will pull alongside the animals and rapidly attach a tag that records information, a potentially dangerous task given their immense power.

The work is worth the effort, she says.

"As a top predator, if the population can increase it suggests the ecosystem is healthy enough to support them, which is very important."

The biologist says there's been "a definite increase in sightings" since fishing rules of the past decade protected animals caught on long lines and in weirs.

Records go back over a century -- complete with annotations such as an 1873 entry from a St. Pierre Bank, N.L., fisherman remarking, "teeth in dory."

However, the federal Fisheries Department's partnership with American researcher Gregory Skomal, of the Massachusetts division of marine fisheries, and the Atlantic White Shark Conservancy, will provide more reliable information.

Skomal's group is preparing a population estimate in his area, where there's evidence of what scientists refer to as a "hot spot" of sharks at various stages of life feasting on abundant seals off Cape Cod.

"It seems to be their first stop on the highway on the drive from Florida to Canada, where you can find a pretty good meal," Skomal explains in a telephone interview from his office.

His team's survey tags an animal and then returns to that area to see how many others are spotted or captured, before recapturing one of the original sharks from the prior visits.

"We have to come up with that number for Cape Cod and then we can take a hard look at what proportion of our animals move into Canadian waters," the American researcher explains.

Skomal says so far his team has identified and tagged roughly 20 great whites -- out of about 170 tagged in the area -- that are prone to northward journeys over the five year study in his zone.

In anticipation of their arrival off Nova Scotia, Bowlby's team has access to arrays of acoustic stations listening for their "ping" over this summer and fall.

She tagged one great white herself last year off the Nova Scotia coast, nicknamed "North."

The data gathered on the sharks' trips, the depths they went to and surrounding water temperatures may give Bowlby data on their preferred habitat.

So far, she's noting the sharks are appearing to search along the coasts for prey and are in both deep and shallow water, and often near the surface.

Still, one of the questions bothering some experts is why great whites are seldom detected by acoustic arrays near Sable Island, where thousands of seals make their home.

Whoriskey's "speculation" is the grey seals are forming social units that can fight off one of their deadliest enemies.

Meanwhile, a non-profit group that's made some great white sharks into household names in Nova Scotia has applied for a permit to conduct a return visit off Cape Breton from Sept. 13 to Oct. 4.

The animals are given Twitter names such as "Hal" and thousands of people follow them on the organization's online global shark tracker, effectively becoming cheerleaders for great whites' apparent comeback.

Wow this is super cool to see. 3 white sharks we tagged last year in Nova Scotia, @WhitesharkHal @GWSharkJane & @GWSharkCabot, are back pinging in close proximity to each other on the southern tip of the province. pic.twitter.com/uEJSNUEntl

Bob Hueter, Ocearch's chief science adviser and a shark biologist at Florida's Mote Marine Laboratory, says his group's research is showing the wide range of the great white sharks from southern Florida to the Cabot Strait.

"A good proportion we've tagged since 2012 have gone to Atlantic Canada waters and have spent time in Nova Scotia," he said in a telephone interview.

He says his group's goal is to have fully tagged 60 sharks of various sizes and ages from Florida to Nova Scotia and to track their movements and habitats.

For Bowlby, the end game is greater knowledge on habitat, feeding habits and even shark nursing grounds -- though so far none have been found -- leading to better informed policy decisions.

For example, if the sharks are once again consuming seals in large numbers, this data can affect policy decisions on permitting a cull of the massive herds.

In addition, there is the curiosity -- even awe -- over how one of the ocean's great animals behave in their lifetimes.

"They're beautiful, they're fascinating, they're graceful, they're powerful. They're amazing animals," the scientist says.