Off Nova Scotia, a bid to 'unravel the mystery' of great white sharks 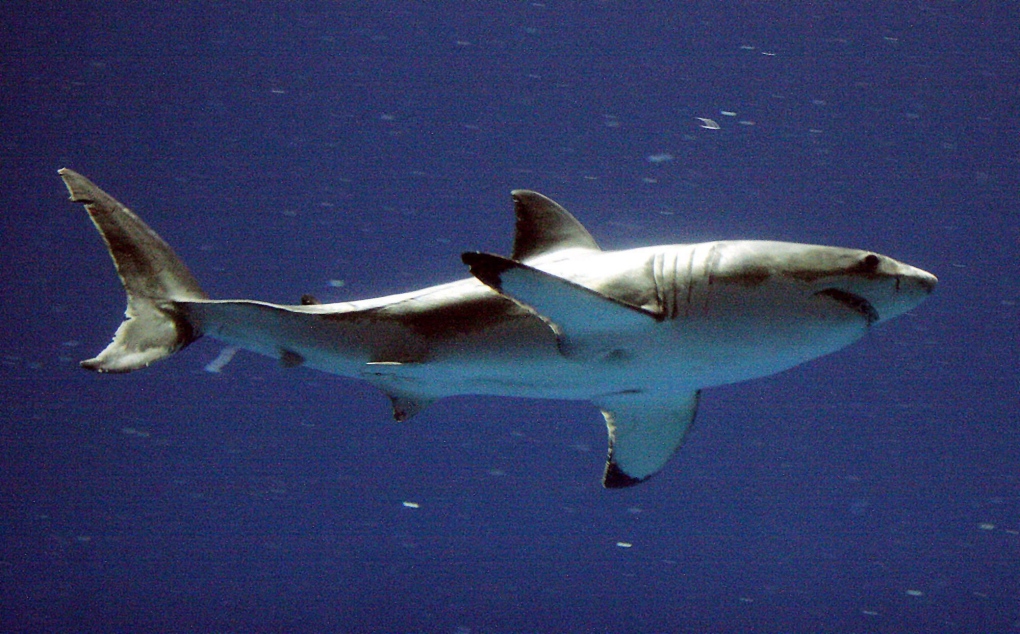 LUNENBURG, N.S. -- Not far off Nova Scotia's rough-hewn shoreline, scientists on board an aging crab boat lay in wait for one of the marine world's greatest -- and most mysterious -- predators.

The researchers are busy "working the water" -- dunking bits of fish in hopes of drawing a great white shark close enough to catch it and very carefully direct it onto their large boat.

Once they get a shark on board, the Ocearch team plans to afix it with several satellite tags that can collect data identifying everything from water temperature and salinity levels to its movements and feeding behaviours.

They're hoping the information can help them answer a central question -- whether Nova Scotia may be a second mating site for Atlantic white sharks, something scientists say could be key to protecting the endangered species.

"We're up here trying to solve the puzzle of the North Atlantic white shark population," Dr. Bob Hueter, chief scientific adviser for the Ocearch expedition, said Thursday just outside the mouth of Lunenburg harbour on the first day of the team's three-week expedition.

"We're just beginning to unravel the mysteries of the white shark in the North Atlantic -- where they're giving birth, their migratory patterns, where they mate, which is why we're here, and what they feed on."

The team was drawn to the area after one of Ocearch's tagged sharks -- an adult male named Hilton, known for a wry Twitter feed that regularly tweets out his movements -- ventured into the region last fall and then returned this year, suggesting he was here seeking out a mating partner.

Chris Fischer, the founder of Ocearch and the expedition leader, said white sharks are known to mate around Nantucket, Mass., and give birth off the south shore of Long Island, N.Y. But, he said Hilton and a female tagged shark named Lydia didn't go to those areas, indicating they may be spending their time mating in other areas.

"We believe he's showing us a second aggregation site and if we can find other mature males and other mature females, that might lead us to believe there's some mating going on here," he said on the Ocearch vessel, a former Bering Sea crab boat that now serves as the group's main research boat.

"Hilton knows where he is and what he's doing. He's not lost. These animals have an unbelievable capacity to navigate and a very accurate calendar. He's here for a reason."

The Ocearch team, which includes 26 researchers from 19 U.S. and Canadian universities and labs, hopes to catch a shark by hooking it onto a line held by crew on a smaller boat who will then try to lead the shark to the large Ocearch vessel.

They will try to guide the shark onto a submerged platform with the help of a crew member who jumps from the small boat into the water with the shark to secure it on the platform.

Lindsay Laughner, an education co-ordinator with Ocearch, explained that the platform is then raised so scientists can attach the tags and begin their sampling. They will place a wet towel over its eyes and a saltwater hose in its mouth to flush water through its gills while their work is being done.

"We can do about 12 research projects in 15 minutes before that shark is tagged and released, so it's really exciting," she said in the tight confines of the boat's tackle room, where researchers will handle the samples.

They will also insert an acoustic transmitter in the shark that will provide data on its location for about 10 years. Hueter, who has studied sharks for more than four decades, said the whole process was akin to an "alien abduction," but one that hasn't appeared to cause the animals any stress.

Laughner said about 10 institutions will also receive samples from animals that are caught so they can do their own research using the blood, mucus, muscle, parasite, genetic and other samples collected by Ocearch. She says it will provide much more sophisticated data than previously available.

"We want to get as many people working on this as possible," she said. "We're losing 250,000 sharks a day to shark fin soup and bycatch and for their liver oil, so it's very important that we get everybody together so we can collaborate and help see where our sharks are moving and why they're going there."

Before 2007 when Ocearch was founded, scientists didn't know much about the life history of the North Atlantic white shark. In 2013, the group started a project specifically on that species and tagged five sharks. The group, which receives about $1.7 million a year in public and corporate donations, has tagged 37 white sharks and hope to tag 60 in total.

Fischer said learning about the sharks' migratory patterns, nursery areas and mating habitats is critical to its survival and the overall health of the ecosystem, since the apex predators help manage other species.

"Sharks are the lions of the oceans -- they're the balance keepers," he said on deck, as light winds and rolling swells buffeted the boat. "They keep the second tier of the food chain from exploding and wiping out all of the food that we want to eat."