Officer's acquittal on sex charges provokes a debate about consent 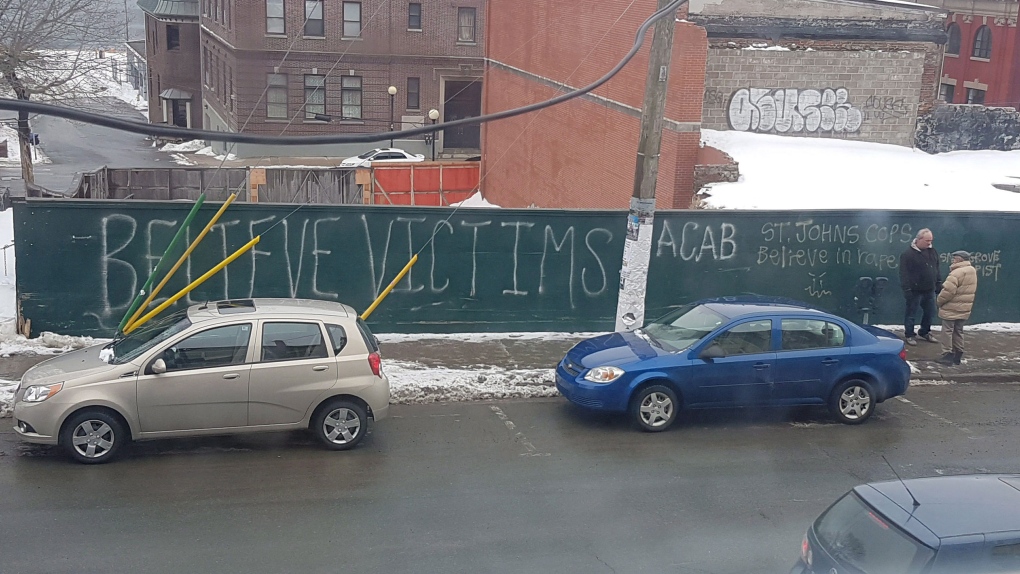 ST. JOHN'S, N.L. -- Four days before Christmas 2014, a young woman approached a parked police cruiser in the early hours of the morning.

The woman, then 21, had been drinking in the St. John's bar district, and would later testify she thought it was a safer way home than a taxi.

Months later, the officer who drove her home, Const. Doug Snelgrove of the Royal Newfoundland Constabulary, was charged with sexually assaulting her that night.

The case turned on consent.

Snelgrove's acquittal Friday night by a jury has led to protests and calls for rethinking the notion of consent. The police chief has issued two separate statements, and the provincial justice minister has been drawn into the debate, as activists press for action.

The Crown argued Snelgrove, a 10-year veteran of the Royal Newfoundland Constabulary, took advantage of a vulnerable woman. She said she had been drinking, and could not remember if she had consented.

Snelgrove, 39, admitted he went into the woman's home and had sex with her but testified it was consensual. He said she did not appear drunk, and he was responding to her sexual advances. He said he believed the woman was capable of consenting.

Snelgrove's lawyer suggested the jury must have had reasonable doubt about whether she agreed to sex, or Snelgrove believed she had.

Within hours of the verdict Friday night, about 70 people gathered outside the courthouse to protest. Graffiti also appeared around the city over the weekend attacking Snelgrove and the force.

At police headquarters on Monday in St. John's, about 200 demonstrators seized on the case as evidence that something must change.

"We need to redefine what consent means under the law, in the courts. Obviously our current definition isn't working for us," said Alex Noel, after speaking to the crowd, as police watched from windows above.

Demonstrators chanted "Fire his ass," and held signs saying "Justice Now" and "I believe her."

St. John's lawyer Allison Conway, who followed the case but was not directly involved, says she understands the anger. Many people may want the law to better reflect a moral standard of consent, she added.

Still, the law as it stands allows that someone who was drunk or can't remember may still have consented, she said in an interview.

"People are very upset by the actions of the officer in this case and I think that's wholly understandable. The anger at the verdict, I understand less, because it is compliant with the law.

"I can understand why that might be frustrating but I think there has been some confusion as to the difference between legal consent and perhaps what we'd like consent to be."

Conway has represented sexual assault survivors. She agrees there are challenges in an adversarial justice system that critics say perpetuate victim-blaming.

"Would we prefer consent in a moral sense to be a higher standard? Perhaps. But that's not where the law is."

Snelgrove has been suspended without pay since July 2015 and still faces a disciplinary process which could include dismissal.

"Some members of the community have demanded that we dismiss Snelgrove immediately," he wrote. "However, we are bound by the rules of the RNC Act."

Janes stressed that the disciplinary process must wait until the criminal one wraps up, including a 30-day period in which the Crown could appeal the verdict.

"I do not and will not tolerate any unprofessional or unethical behaviour by my officers," Janes said. "That would be unfair to the hundreds of outstanding women and men, both police officers and civilians, who deliver compassionate and ethical police services every day in our community."

"I have every confidence in the police forces of this province, the women and men that do this job day in and day out," he said during question period.

That being said, Parsons said the case raises legitimate issues.

"We've seen a situation where the public is upset and we will continue to ask questions, but I will support the men and women doing this job."

Jordan Brenton was at Monday's demonstration holding a sign: "Not my definition of consent."

"There's definitely going to be doubt in women's minds of coming forward," he said.