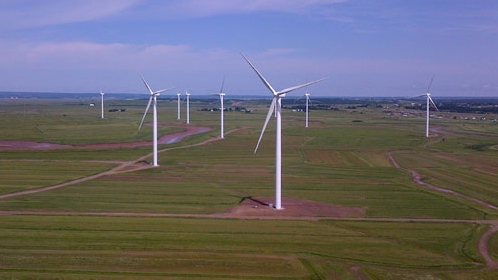 The view from the top of a wind turbine at the wind farm near Amherst, N.S.

The wind farm near Amherst, N.S. has been fully operational since April but the official ribbon-cutting didn't take place until today.

When combined with the other wind farms in the province, the turbines represent 30 per cent of Nova Scotia's energy. On its own, the farm provides enough electricity for 10,000 average homes.

Brad Walters is an environmental studies professor at Mount Allison University. He says that while Nova Scotia came late to the game, there is huge potential in wind power.

"I have no doubt that we could not only generate more power than we need by wind, if we really wanted to, but we could probably generate excess power and export it," says Walters.

There are 15 wind turbines in operation near Amherst, but officials with Sprott Power Corporation say there is interest in increasing that number.

"We have got enough landowner support that we could probably put up another 15 turbines, so about the same size as this," says Jeff Jenner CEO of Sprott Power Corporation.

"In fact, out right now there is an RFP for further wind development," says Dexter. "I believe that closes in the next couple of weeks."

That is music to the ears of those focused on moving away from fossil fuels.

"When you lack leadership at the federal level, in a sense it is left to the provinces to step up and fill in the vacuum, try and move forward," says Walters.

Further details on the province's plans should become available in the next couple of weeks.