One in three workers say they will find new job if required to return to office full-time: study

HALIFAX -- A recent study released by Robert Half, a global staffing firm, shows that about one in three professionals, or 33 per cent, currently working from home due to the ongoing COVID-19 pandemic would quit their job to find a new one if they were required to return to office full-time.

The study also shows that over half of the employees surveyed (51 per cent) would prefer a "hybrid work environment," where they can divide their work hours between the office and another location.

"After more than a year of uncertainty and pandemic-induced remote work, there is a growing desire among some business leaders to return to business as usual, including welcoming employees back to the office once it is considered safe," said David King, Canadian senior district president of Robert Half. "However, companies should be prepared for a potential disconnect between their ideal work structures and that of their employees." 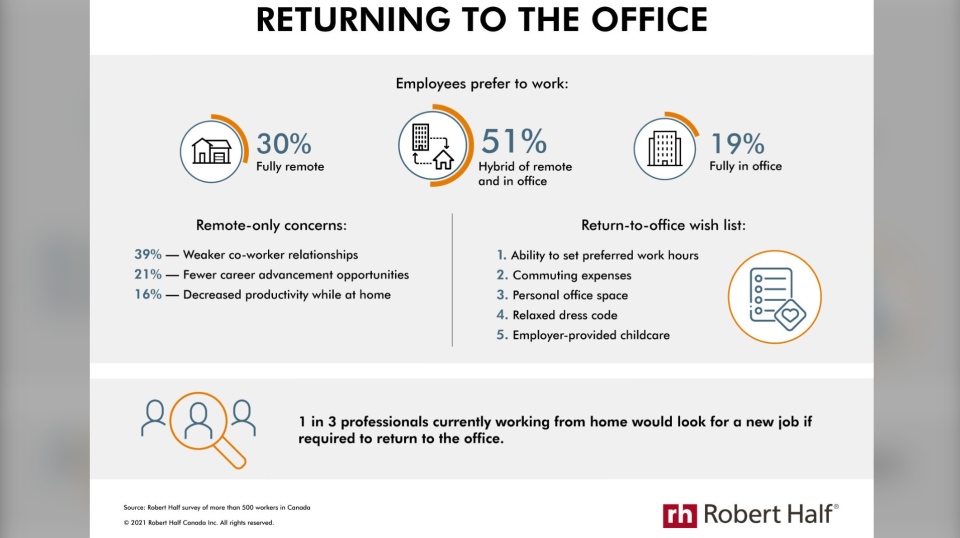 According to the staffing firm that developed the survey, they say it's important for employees to create a return-to-work plan that prioritizes employee health and well-being.

In the survey, participants gave a number of ways their company can support their return to office, which include:

"As we reimagine the future of work, now is the time for managers to engage in mindful discussions with their teams to determine what they most want and need," said King. "Establishing a return-to-work plan that prioritizes employee health and well-being and fosters a strong corporate culture can help bolster retention and recruitment efforts."

April Ramsay from Eastern Passage, N.S., recently started working with a hybrid arrangement, splitting her work week between home and her office. She's hopeful this method will continue for the long-term.

"Working from home, you have the option, once you get into your schedule, of being able to throw in a load of laundry or do a few things – that is good for home," said Ramsay. "But then to come into the office and see your co-workers and have those conversations, being able to be out and see people, it's kind of a nice mix."

Brittany Keddy of Port Williams, N.S. says while she's making the most of working from home for now, she is looking forward to life in the office again.

"I'm kind of going through phases right now. I just got out of a phase where I was just done with working from home. I wanted to go to a job where I could clock in and out, and then I'm done, go home, you know, that separation because I wasn't feeling being at home all the time," said Keddy. "But now, hybrid would probably be nice."

The online survey by Robert Half was conducted between March 9 to March 16, and included more than 500 workers 18 years of age and older at Canadian companies.