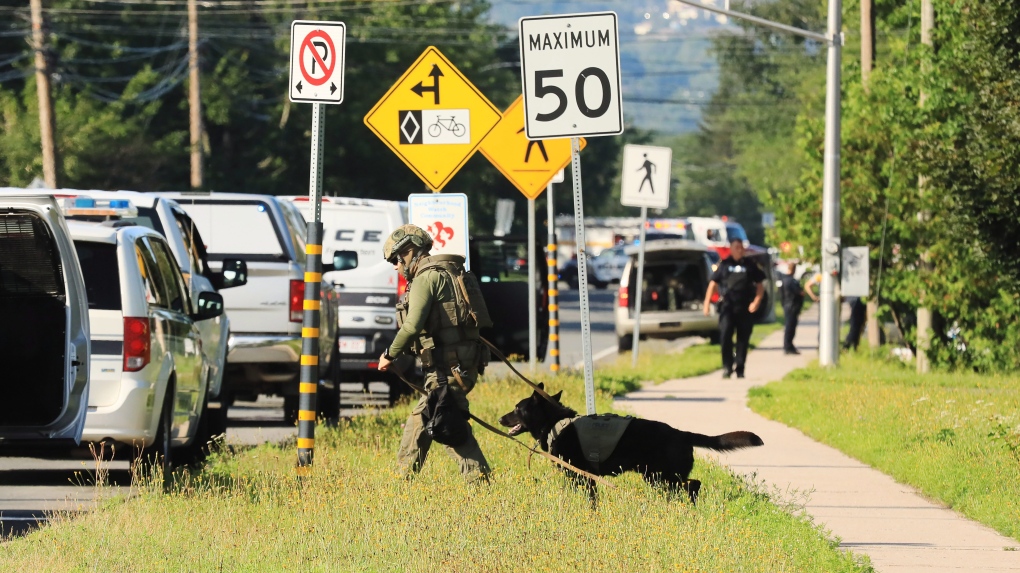 Police officers survey the area of a shooting in Fredericton, N.B. on Friday, August 10, 2018. (THE CANADIAN PRESS/Keith Minchin)

FREDERICTON -- Officials say one person is being treated in hospital following a shooting that left two civilians and two police officers dead in a residential Fredericton neighbourhood on Friday.

Horizon Health initially said that doctors were "treating multiple victims" of the shooting but this morning clarified that only one person was being treated, whereas four people arrived at hospital and were pronounced dead.

The victims have been identified as Donnie Robichaud, Const. Robb Costello, Const. Sara Burns and a woman whose identity has not yet been publicly confirmed.

Police say a 48-year-old Fredericton man is in custody and is being treated for serious injuries.

Sean Callahan says Robichaud, his cousin, is a father of three.

Callahan says Robichaud was a loving father and friend who played bass and sang in a few local bands, worked in autobody shops, enjoyed riding his Harley Davidson and was the kind of guy who was always there to lend a hand.

"The guy was so likable, like I don't think he had anybody that hated him, and Donnie, if he even hated you, he'd still give you the shirt off his back -- he would help you out," he says.

A vigil for the shooting victims was held Friday evening, where more than 100 mourners packed into St. John the Evangelist Anglican Church.

Across Canada many police forces lowered their flags to half-mast, while political leaders of every stripe offered their condolences.