One week after N.S. premier asked for more troops, fewer boots on ground

One week after N.S. premier asked for more troops, fewer boots on ground 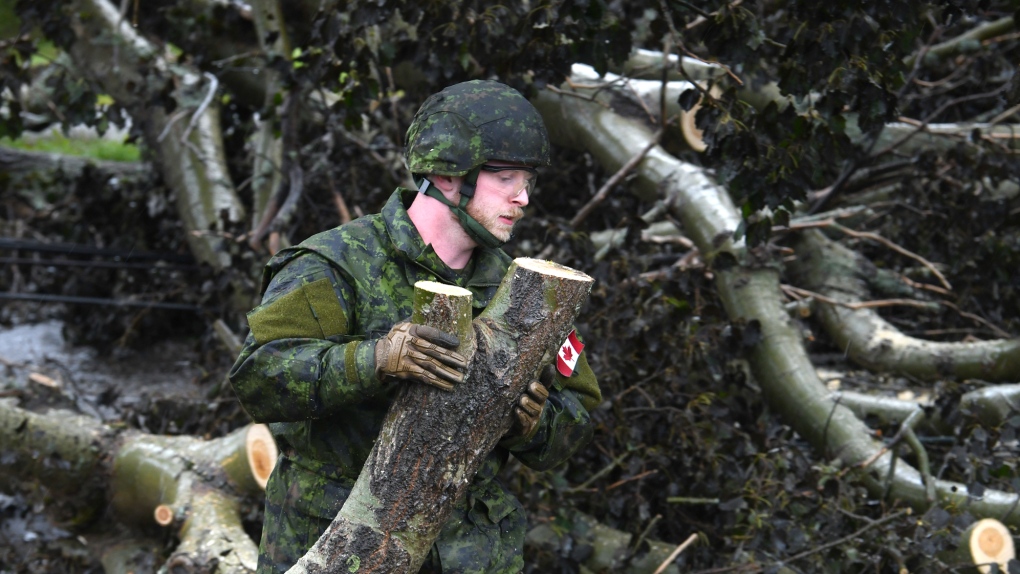 One week after Nova Scotia's premier asked Ottawa for more soldiers to help clean up the twisted mess caused by post-tropical storm Fiona, there were fewer troops on the ground Friday than there were earlier in the week.

Daniel Minden, press secretary to Defence Minister Anita Anand, confirmed in an email there were about 550 members of the Canadian Armed Forces in Nova Scotia last weekend, but that number had dropped to 400 by Thursday.

On Sept. 29, Premier Tim Houston said the province needed 1,000 members of the military to help with moving trees, clearing debris and other chores.

"In a province where we have something like 10,000 military personnel stationed here, it's my personal belief that pretty much every single one of those people would drop everything to help their fellow Nova Scotians, should they be asked," he said at the time.

Minden confirmed that the federal government had received a recent letter from the Nova Scotia government requesting more troops.

"We will continue to deploy the right number of personnel to accomplish the tasks asked of the Canadian Armed Forces, and we will be there for as long as it takes to restore critical services," Minden said in an email.

The email did not mention anything about additional deployments.

"As we enter Thanksgiving weekend, there are still thousands of Nova Scotians who are without power 14 days after the storm," the statement said. "The damage was devastating, and the cleanup is extensive. More people supporting these efforts can make a huge difference for Nova Scotians."

The email goes on to say there is "no shortage of tasks" for the military.

"Anyone who has spent time in the impacted areas can attest to our needs," the statement said. "Had our request for more personnel been actioned, we could have been further along. It's disappointing that the federal government didn't see it that way."

Later in the day, a federal official, who spoke on condition of anonymity because they weren't authorized to speak publicly, said it would appear the province has moved into a longer-term recovery phase, having completed most of the emergency tasks related to restoration of power and repairs to other critical infrastructure. What remains are tasks that can be handled by the province and other bodies, they said.

The official also confirmed that on at least one occasion, military members in northern Nova Scotia were "mainly untasked" and waiting for direction.

By Friday afternoon, about 2,300 Nova Scotia Power customers were still without electricity, about 90 per cent of them in northeastern Nova Scotia, where Fiona was particularly fierce. At the height of the storm, early on Sept. 24, more than 500,000 homes and businesses in Atlantic Canada were in the dark, including 415,000 in Nova Scotia. That's about 80 per cent of Nova Scotia Power's customers.

The largest communities still without power include homes and businesses in New Glasgow, Stellarton, Pictou and Trenton. And many of these include single-customer outages, which often require one or more work crews to fix.

"Progress is being made, although these outages do take more time to restore due to the level of damage that occurred," Nova Scotia Power said in a statement.

"The majority of the customers across the province are expected to be restored by Sunday. It is possible there could be individual customers remaining who we will continue to work with one on one, given the extensive damage they've experienced."

In Prince Edward Island, 82,000 Maritime Electric customers were without power almost two weeks ago. That's about 90 per cent of the utility's customers. On Friday, the number of P.E.I. homes and businesses without power appeared to be on the rise.

For much of the past week, Maritime Electric reported that about 9,000 of its 86,000 customers were still waiting to be reconnected to the electric grid -- but that number jumped to 11,000 Friday morning.

There was no explanation on the utility's website, and company spokesman Kim Griffin could not be reached for comment.

Meanwhile, the Manitoba government pledged Friday to send 15 emergency personnel and additional equipment to P.E.I. on the weekend. Among those headed to P.E.I. for up to two weeks are chainsaw-certified staff members from Manitoba Parks, as well as personnel and chainsaws from the Office of the Fire Commissioner.

Manitoba Premier Heather Stefanson issued a statement saying, "Manitobans and Canadians are well known for helping our neighbours in times of great need."

This report by The Canadian Press was first published Oct. 7, 2022.

Transport Minister Omar Alghabra says the upcoming holiday travel season is sure to be a busy one, but that he’s working with air travel stakeholders to ensure the summer’s flight cancellations and lost luggage problems aren’t repeated.

US knocked out of World Cup, loses to the Netherlands 3-1

Memphis Depay and Daley Blind scored in the first half and Denzel Dumfries added a late goal as the Netherlands eliminated the United States from the World Cup with a 3-1 victory Saturday that advanced the Dutch to the quarterfinals.

Chinese authorities on Saturday announced a further easing of COVID-19 curbs with major cities such as Shenzhen and Beijing no longer requiring negative tests to take public transport.