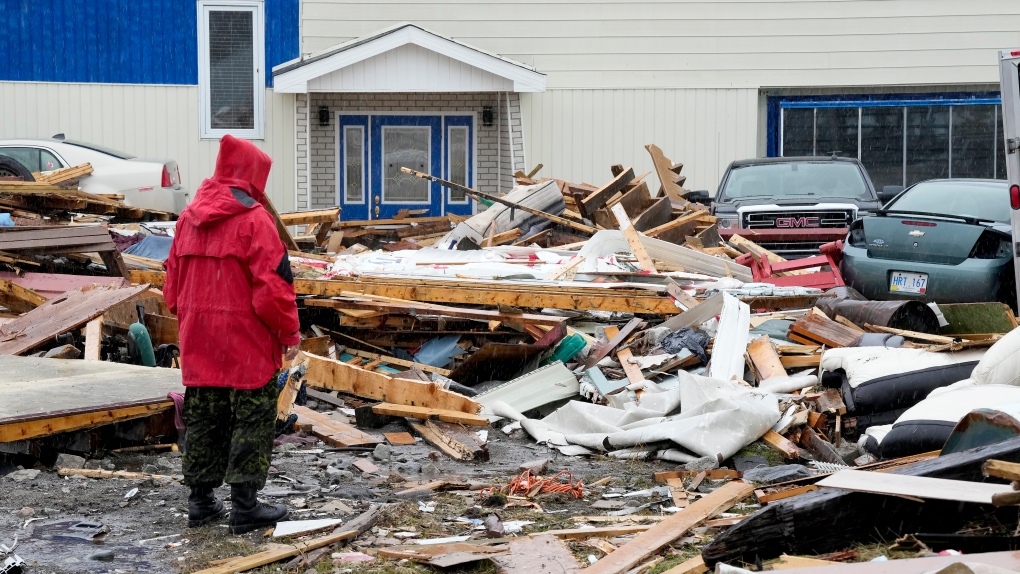 Erica Ingram, a mother of three who has lived in Port aux Basques, N.L. her entire life, lost her home and just about everything in it when post-tropical storm Fiona hit the southwestern coast of the province.

"I've been down to the site where the houses were twice, and it's still not registering to me that it's all just gone," Ingram said in an interview.

"There's nothing there. It's all just rocks. You can't even tell there were homes there at all."

Ingram's home is one of more than 75 in the town of 4,000 people that were destroyed or severely damaged, Newfoundland MP Gudie Hutchings said earlier this week.

Amid the tragedy, Ingram said a bright spot has been finding out that some of her family photos and mementoes have been found.

As residents in Port aux Basques find items like pictures, CDs, tools and toys in the debris, they're snapping photos and posting them in a Facebook group aimed at reuniting people with things they lost to the storm.

"It's just amazing. I'm so grateful there are so many in this community who are willing to help like this," Ingram said.

Before the group was established, neighbours were working away at collecting salvageable items they found in hope of getting them back to their owners, she said. The Facebook group has now streamlined the process.

It was through the group that Ingram learned that some of her cherished family photos had survived. One is of her as an infant being held by her mother and grandmother on the day of her christening. Another is of a birthday cake when Ingram was a young child.

"That meant a lot to me. Once I get them back I'm going to make a memory book for myself and my parents with everything we found, although some of them can't be salvaged," she said. A neighbour is keeping the photos safe while Ingram and her children stay with family.

Peggy Savery, who grew up in Port aux Basques and retired to her hometown with her husband four years ago, said she was shocked to see that almost three-quarters of what has been posted on the lost and found page belong to her.

A massive wave destroyed Savery's home, along with some other houses on her street. She said that at first, seeing her things posted in the Facebook group was difficult.

"But my son pointed out how important it was that people are helping in any way they can. And when I look at some of this and realize I'm going to get these things back, it's heartwarming," she said.

Both Savery and Ingram fled their homes in a hurry without time to pack valuables.

"I was so quick to pack up that the only thing I was concerned about was getting the kids out and grabbing the baby's playpen so he'd have somewhere to sleep," Ingram said. Her children are 13, nine and three months old.

Savery said she was so certain she and her husband would soon return to the house that they left his wallet and her purse behind as they fled early Saturday.

"We deal with big storms all the time, we had no reason to believe we wouldn't be able to go back," she said.

Among Savery's lost belongings are her late father's journals and some of her son's art. Ingram lost a necklace that contained her grandmother's ashes and a vial that held her grandfather's ashes.

Nicole Anderson, another lifelong Port aux Basques resident, created the Facebook group with her mother. She said she's a sentimental person and wanted to make it easier for people to be reunited with their belongings.

Anderson said she feels incredibly lucky that her home was not severely damaged by Fiona, and the lost and found is just one way the town is working to help those who suffered great losses in the storm.

"This whole community is really tight-knit. We all know each other. So it's very heartbreaking and devastating to see what people here are going through," she said. "But I feel like the community is coming together to help everybody."

Amid the unfathomable loss, Savery said there is hope that more cherished items will be found.

"I don't have any clothes that are mine. I have nothing that's mine, but these things are mine," she said. "It's hard to explain just what that feels like. It means a lot to me."