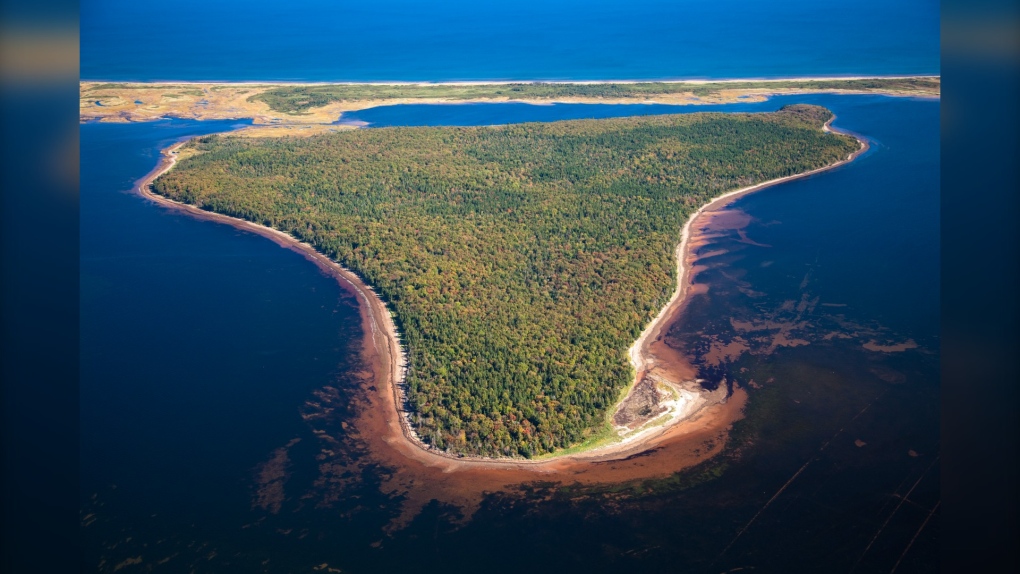 An aerial view of Hog Island and George Island, Malpeque Bay, Prince Edward Island is shown in this handout image provided by the government of Canada. Parks Canada signed a provisional agreement today with two First Nations to establish a new national park reserve on a pristine chain of islands that extend along the northwest coast of Prince Edward Island. THE CANADIAN PRESS/HO-Government of Canada-John Sylvester
LENNOX ISLAND, P.E.I. -

Parks Canada signed a provisional agreement Wednesday with two First Nations, saying the memorandum of understanding is aimed at protecting Hog Island Sandhills, which includes one of the most significant coastal dune ecosystems on the East Coast.

Known in the Mi'kmaq language as Pituamkek, which means, "at the long sand dune," the 50-kilometre strip of land off P.E.I.'s northwest coast has been used by the Mi'kmaq for 4,000 years. It includes a number of significant archeological digs, and sites considered sacred to the Mi'kmaq.

"Many of us went there with our parents and our grandparents to fish eels and oysters and to pick berries and run along the endless, sandy beaches," Chief Darlene Bernard of the Lennox Island First Nation told a virtual news conference.

"My mind's eye looks to the future and I see a picture of children playing in the sand, as parents are seen in the distance fishing for traditional food, and elders tell us stories. These are my descendants -- our descendants."

The northern edges of the islands are exposed to the powerful tides in the Gulf of St. Lawrence. More importantly, they provide protection to Lennox Island, Malpeque Bay and Cascumpec Bay, areas world-renowned for their oysters and other seafood products.

That means the islands are also important to Ottawa's climate change strategy, which includes dealing with rising sea levels.

Chief Junior Gould of the Abegweit First Nation said the agreements make it clear that Pituamkek is part of the unceded territory of the Mi'kmaq, subject to the Peace and Friendship Treaties signed with the Crown in the early 1760s.

"We want to protect the environment, protect the culture and protect our people and their way of life in P.E.I.," Gould told reporters.

Federal Environment Minister Steven Guilbeault said the proposed national park reserve would be one of the first of 10 new national parks to be established through co-management with Indigenous groups, as promised by Prime Minister Justin Trudeau.

"This journey has been years in the making," the minister said. "These lands have held cultural and spiritual value for the Mi'kmaq people for millennia."

A national park reserve is a designation recognizing an area as subject to an active land claim.

Accessible only by boat, the islands include an ancient Mi'kmaq burial ground and some rare old-growth forests. As well, they are home to a number of threatened or endangered species, including the piping plover, little brown bat and gypsy cuckoo bumblebee.

Bernard said the long-term plan is to make the islands accessible to visitors, adding that limits will be placed on where people can go.

"We're not going to hide it away -- just the opposite," she said. "We want to protect it so that people can come and enjoy the landscape but we need to do it in a way that is respectful and appropriate."

Among the federal government's goals is to ensure First Nations communities can preserve their ancestral and present connection to the land and to provide Indigenous groups with opportunities for "visitor experiences."

After an archeological survey in 2006, the two Mi'kmaq First Nations and the provincial government asked Ottawa in 2009 to designate the islands a protected area. A feasibility study that started in 2019 was recently completed, clearing the way for Wednesday's agreement. Negotiations are set to begin on a final agreement to formally establish the park, but no deadlines have been set.

This report by The Canadian Press was first published Jan. 19, 2022.

Prince Charles was invested as an extraordinary commander in the Order of Military Merit and laid a wreath at the National War Memorial as he began the second day of his Platinum Jubilee tour of Canada.

Alberta Premier Jason Kenney is to learn today if he still has enough support from his party to stay on as leader.

What's the average price of a home where you live?

Casey White and Vicky White paid a man to help them book an Indiana hotel room during their time on the run after the inmate and corrections officer slipped away from an Alabama jail, setting off an 11-day manhunt.