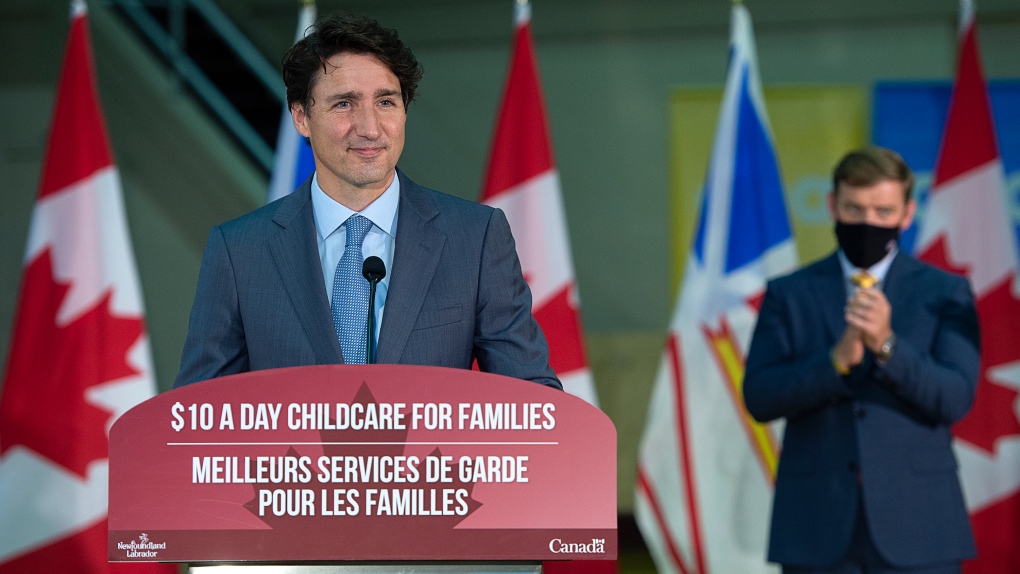 Prime Minister Justin Trudeau, accompanied by Newfoundland and Labrador Premier Andrew Furey, right, receives an ovation at the College of the North Atlantic in St. John's, N.L. on Wednesday, July 28, 2021. The province has struck a deal with Ottawa for a $10-a-day child-care program. THE CANADIAN PRESS/Andrew Vaughan

ST. JOHN'S, N.L. -- Prime Minister Justin Trudeau was in Newfoundland and Labrador Wednesday to announce a $5.2-billion deal to help the province cover the costs of a troubled hydroelectric project ahead of an expected federal election call.

Trudeau's visit to St. John's, N.L., wrapped up a two-day tour of Atlantic Canada that featured several major funding commitments, and he concluded his day in Newfoundland and Labrador by announcing the province will become the fourth to strike a deal with Ottawa for a $10-a-day child-care program.

As he addressed reporters, the prime minister was flanked by the six Liberal members of Parliament from the province. He alluded to the mismanagement that led the over-budget Muskrat Falls hydroelectric project to become what Liberal Premier Andrew Furey has called an "anchor around the collective souls" of the province.

"The pressures and challenges faced by Newfoundlanders and Labradorians for mistakes made in the past is something that Canadians all needed to step up on, and that's exactly what we did," Trudeau said.

Furey, who joined Trudeau for the two announcements and was effusive in his praise for the federal government, said the federal funding will help Newfoundland and Labrador avoid a spike in electricity rates that had been expected when Muskrat Falls begins generating power this November.

"Muskrat Falls has been the No. 1 issue facing Newfoundlanders and Labradorians now for well over a decade," Furey said, adding that he is regularly asked by people whether their electricity rates are going to double.

"We landed on a deal today that I think -- I know -- is a big deal for Newfoundland and Labrador and will finally get the muskrat off our back," he said.

The agreement-in-principle between the two governments includes a $1-billion investment from Ottawa in a transmission portion of the project, as well as $1 billion in loan guarantees. The rest will come from annual transfers from Ottawa equivalent to its annual royalty gains from its share in the Hibernia offshore oilfield, which sits off the coast of St. John's. Those transfers are expected to add up to about $3.2 billion between now and 2047, when the oilfield is expected to run dry.

The money will help cover costs set to come due when the Labrador project comes online, preventing rate increases that would have been needed to pay the bills. Though electricity rates in the province will still rise, to 14.7 cents per kilowatt hour from the current 12.5 cents, that's well below the projected 23 cents that officials had said would be needed to cover the project's costs.

Muskrat Falls was commissioned in 2012 at a cost of $7.4 billion, but its price tag has since ballooned to $13.1 billion. Ottawa previously backed the project with billions of dollars in loan guarantees, and in December, Trudeau announced he had appointed Serge Dupont, former deputy clerk of the Privy Council, to oversee negotiations with the province about financially restructuring the project.

Its looming impact on the provincial budget is set against an already grim financial situation: the province projected an $826-million deficit in its latest budget, coupled with $17.2 billion in net debt.

After visiting with children from a daycare centre in the College of the North Atlantic, Trudeau and Furey announced that in 2023, the average cost of regulated child care in the province for children under six would be cut to $10 a day from $25 a day. Trudeau said that within five years, almost 6,000 new daycare spaces would be created in the province.

"As part of the agreement, a new full-day, year-round pre-kindergarten program for four-year-olds will also start rolling out in 2023," the prime minister told reporters. "For parents, this agreement is huge."

Newfoundland and Labrador is the fourth province, after Prince Edward Island, Nova Scotia and British Columbia, to sign on to the federal government's child-care program.

This report by The Canadian Press was first published July 28, 2021.