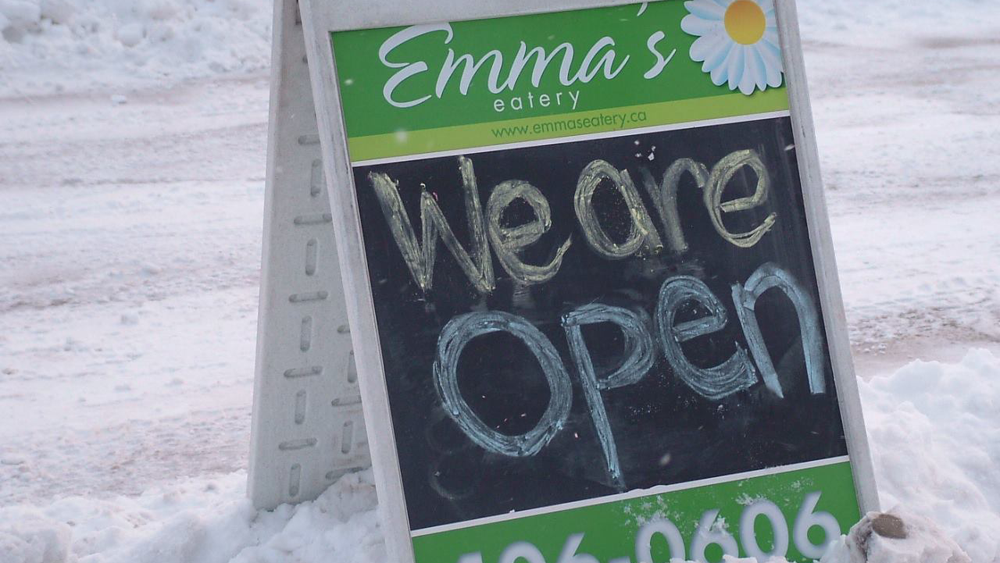 The owner of Emma's Eatery in Eastern Passage, N.S. has announced the restaurant is closing. (Emma's Eatery/Facebook)

HALIFAX -- A Halifax-area restaurant owner has sparked a social media uproar by complaining that a "frustrating new generation" of employees with a poor work ethic has helped kill her business.

A Facebook post Tuesday from Kim Stacey, owner of the now-defunct Emma's Eatery in Eastern Passage, cites several reasons for the closure -- but much of the online jousting has been over her decision to highlight what she describes as the entitled attitude of young staff members.

In her post, Stacey complains that during the nine years the eatery was open, young employees demanded to be "paid dearly" for working shifts that did not interfere with their social activities, hobbies and cellphone use.

She also laments that the workers she has hired -- regardless of age -- often said they couldn't work because they were "too stressed out" or couldn't handle constructive criticism. "So they quit instead of learning work ethic."

Reached by phone, Stacey said some of her employees' expectations were too high.

"It's gotten to the point where they actually think that I'm their family and that they are entitled to come and go whenever they want," she said. "I've noticed a huge difference in the last four or five years."

She said the problem may stem from a school system that refuses to acknowledge failure, or from parents that keep their kids too busy with planned activities.

"They're burning their kids out," she said. "When the kids get to work they say, 'Finally, time to relax."

At one point in the heated online debate, Stacey stressed that not all of her employees have been duds, saying some were "highly disciplined and committed for many years."

Amid the hundreds of passionate responses -- most of which bemoan the loss of the restaurant and its fish cakes -- Stacey is simultaneously condemned for slandering an entire generation and celebrated for telling it as it is.

In response to one Facebook critic, Stacey complains about young, socially active adults who still live at home and expect their employers to schedule them around their extracurricular activities.

"School comes first and, in many cases, family," Stacey wrote on her page.

"However, when ... the employer has to sacrifice their own personal lives to accommodate sports or entertainment activities, and when documented job requirements are not performed because of cellphone distractions and texts ... that becomes a problem."

More than a few on Facebook took Stacey to task for her views, arguing she has only herself to blame for making bad choices when hiring.

"That was your own poor judgment and in no way reflects an entire cohort of people," said one woman.

"I worked at two jobs to put myself through university, and I have lots of friends that did the same, or are still doing so. Some of us were raised right, others were not, much like any other generation. Your blatant stereotyping is unbecoming."

Another correspondent suggested employers must be more flexible with work schedules.

"First off, there is not a single thing wrong with an employee wanting to make their work schedule fit their life. In fact, accomplishing that leads to happier employees, and it's a fact happier employees work better. Unhappy employees tend to ... waste time on their phones."

One post was particularly blunt: "News flash, chef, the puck stops at you. You hired the wrong staff."

In the interview, Stacey said she conducted thorough job interviews and drafted employee manuals and contracts to make sure there was "consistency in expectations, and they were very clearly communicated."

"You're so right about my generation, Kim," said one post. "It disgusts me where the world is heading. Kids these days have no concept of work ethic. They want it all and they want it now and on their terms. Not all, but far too many."

A user identified as Brucey Wayne said in a heated discussion on a Facebook page hosted by Halifax classic rock radio station Q104: "We should be ashamed of ourselves. I had 15 years experience in the food biz and ... what a pathetic bunch. I think work ethic is a problem across the nation, but we are likely leaders in doing a job poorly."