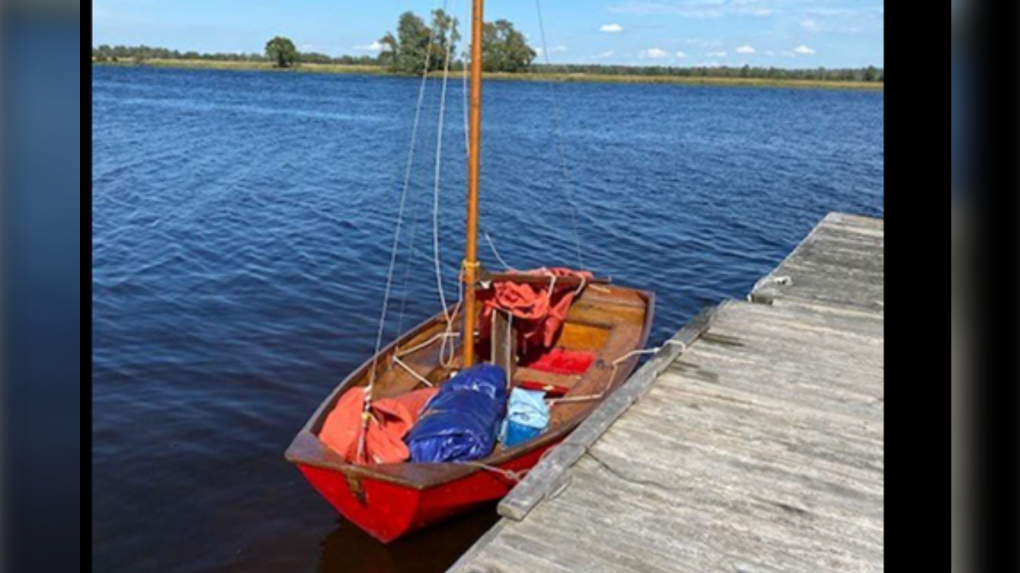 Police responded to a report of an overturned wooden sailboat found in the water in the Queenstown area around 2:20 p.m. The boat was unoccupied, but had personal belongings on board. (Source: RCMP)

The RCMP in New Brunswick says the owner of a boat that was found overturned near Queenstown last week has been located dead near Hampstead, N.B.

On Wednesday, members from the RCMP Underwater Recovery Team, the Coast Guard, Halifax Joint Rescue Co-Ordination Centre (JRCC) and Ground Search and Rescue were investigating in the Queenstown area as part of an investigation into a 54-year-old man from Kars, N.B., who was considered missing.

Around 1:30 p.m. that same day, Ground Search and Rescue members located a body on the riverbank near Hampstead. The body was identified as being the missing man.

An autopsy will be scheduled to determine the man's exact cause of death. Police do not currently believe criminality to be a factor.

On Sept. 27, police responded to a report of an overturned wooden sailboat found in the water in the Queenstown area around 2:20 p.m. The boat was unoccupied, but had personal belongings on board. Police say the owner had been last seen loading his boat at the Wickham Wharf that same day.

The investigation into the man's death is ongoing.

A former employee of Quebec's power utility who is charged with spying on behalf of China was granted bail Monday while he awaits trial.

Prime Minister Justin Trudeau visited Monday the graves of victims of a deadly stabbing rampage at a Saskatchewan First Nation before he was to meet with family members in private.

Work hard and never give up, Michelle O'Bonsawin says during Supreme Court welcome

The newest member of the Supreme Court of Canada says her journey has not been an easy one, but it has been meaningful and rewarding.

After a surge of RSV cases among children overwhelmed hospitals across Canada in recent weeks, one infectious disease specialist explains how the respiratory virus can affect vulnerable adults.

The white gunman who massacred 10 Black shoppers and workers at a Buffalo supermarket pleaded guilty Monday to murder and hate-motivated terrorism charges, guarantying he will spend the rest of his life in prison.

The world's largest active volcano spewed some ash and lava Monday and officials warned residents of Hawaii's Big Island to prepare for the possibility of a larger eruption.

Wouldn't it be nice to never have to work again? While this may sound like a dream to many, it is entirely possible. CTVNews.ca personal finance contributor Christopher Liew shares a handful of helpful tips on how to potentially achieve financial independence.